Preview: Tigers Set for Showdown with No. 22 Auburn in Primetime 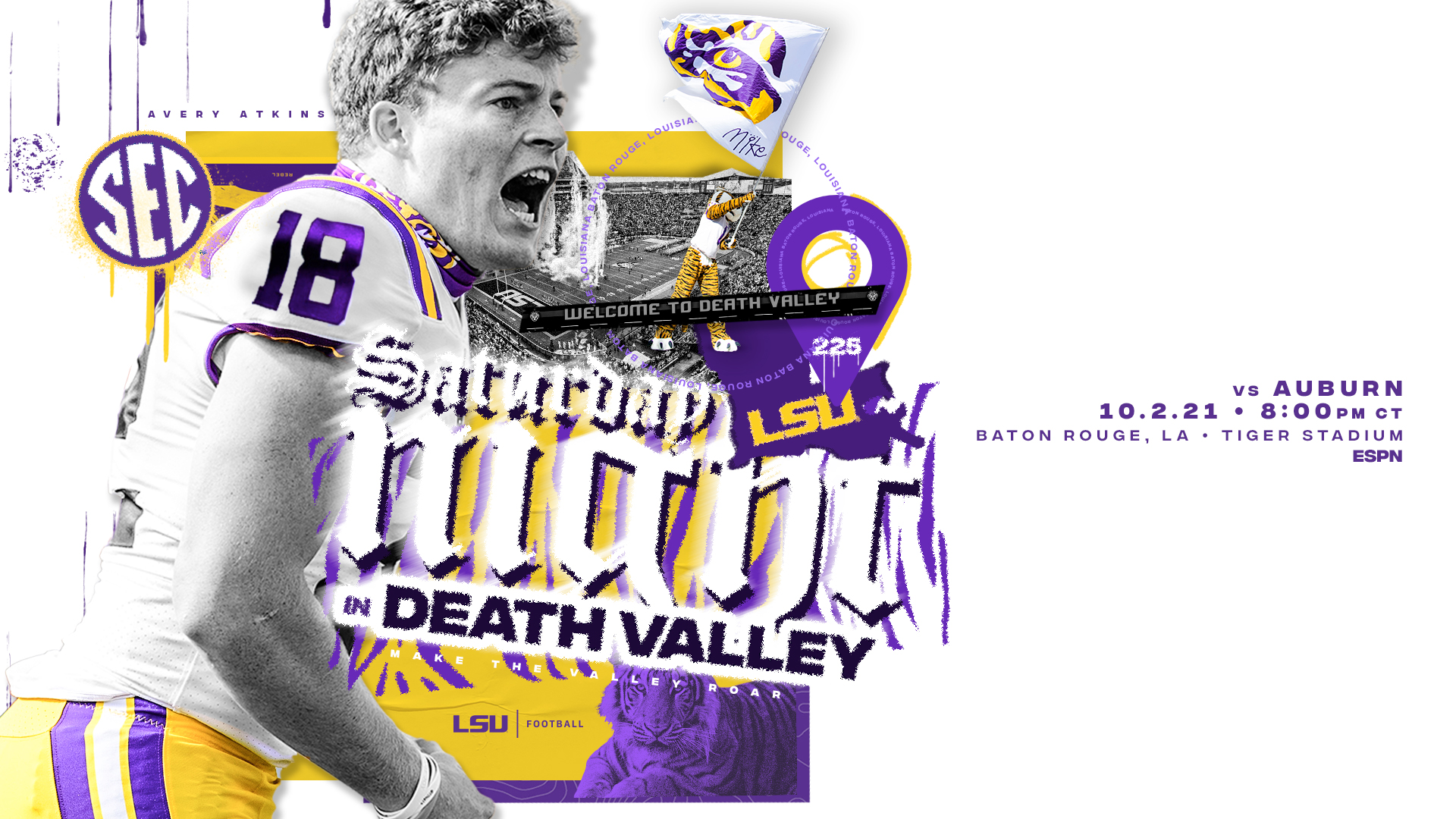 Kickoff is set for 8:10 p.m. on ESPN and the LSU Sports Radio Network.

For many Tigers, it will be their first taste of a full capacity Tiger Stadium for an SEC opponent, something that excites second-year players like defensive end Ali Gaye , who missed out on that last year.

“I’m excited for it,” Gaye said on the fans. “The fans bring a lot for us, a different kind of energy that boosts our morale on the field. I’m looking forward to seeing Tiger fans out there on Saturday night.”

tiger nation, we gone need all of you to get the valley rocking saturday night 🏟 let’s gooo https://t.co/wphVfmNOFs

LSU enters Saturday’s primetime matchup riding a three-game win streak, looking to build off the momentum created, both offensively and defensively, heading into the teeth of conference play.

Quarterback Max Johnson went 17-for-27 for 280 yards and four touchdowns against Mississippi State, and he seems to be finding his groove at the right time. The Tigers were able to generate some explosive plays, too, starting with an RPO deep shot to receiver Kayshon Boutte, who finished with four catches and two scores last week.

That Johnson-Boutte connection is special and the numbers prove it. Johnson is tied for second in the nation in touchdown passes thrown (15), while Boutte leads the FBS in touchdown receptions (8) through four weeks of play.

Defensively, junior safety Cordale Flott continued to make plays, recording eight tackles (four solo), an interception and a forced fumble. Linebacker Damone Clark led the Tigers in tackles for the fourth-straight game with 15, and recovered the fumble that Flott forced.

Clark wasn’t able to scoop and score like Andre Anthony, though, something Gaye and the defense have made sure to give him some playful grief about. But he did win SEC Defensive Player of the Week, the league office announced on Monday, another sign of his development in Year 4.

“The two turnovers he caused were game-changing for us,” LSU Head Coach Ed Orgeron said of Flott’s performance in Starkville. “He’s a starter, a tremendous player. When you look at the slot position in the SEC, you have to cover some of the best receivers in the country … it’s a huge position for us.”

Tackling has been a bright spot for LSU’s defense through four games, but a different beast awaits on Saturday as they go head-to-head with one of the most powerful backs in the SEC.

Auburn is led by one of the premier rushers in the nation in sophomore running back Tank Bigsby, who has totaled 403 yards (6.2 YPC) and four touchdowns on 65 carries so far. Quarterback Bo Nix has thrown five touchdowns and no interceptions, but it was T.J. Finley who led them to a 98-yard scoring drive with less than 3:30 left to defeat Georgia State on the Plains.

“He runs very low,” Orgeron said on Bigsby. “He runs north and south. We’re going to have to gang tackle and get lower than him. He pulls a problem, he’s a really good running back.”

Orgeron also said on Thursday that he expects the return of offensive tackle Cameron Wire in some capacity, along with receiver Jontre Kirklin and defensive end Soni Fonua .

Take the next step each week — that’s something Coach O has harped on after each of LSU’s victories this season. Currently on a three-game win streak, the Tigers have a chance to take their biggest step to date, in front of a primetime audience, and 102,321 strong on Saturday night.

Remember that it is Saturday Night in Death Valley

The Pride and Tradition of the LSU Tigers has been entrusted to you… pic.twitter.com/mpz6Pw3Rv1

“We’re nowhere near the football team that we want to be, but we’re getting there,” Orgeron said. “We took the next step (last Saturday), and we have to take a bigger step this week with a big time opponent coming in.”

The LSU-Auburn rivalry has produced some instant-classics over the years, from the Earthquake Game in 1988, to Flynn finding Bird in the back of the end zone in 2007, to DJ Chark’s 75-yard punt return to help the Tigers complete the largest comeback victory against an SEC team in Tiger Stadium history.

If history repeats itself, Saturday Night in Death Valley should be a fun one.

It will be late, and it will be loud, but the LSU-Auburn matchup wouldn’t have it any other way.