There’s no one who competes like Max Johnson. And no one has more fun doing it. 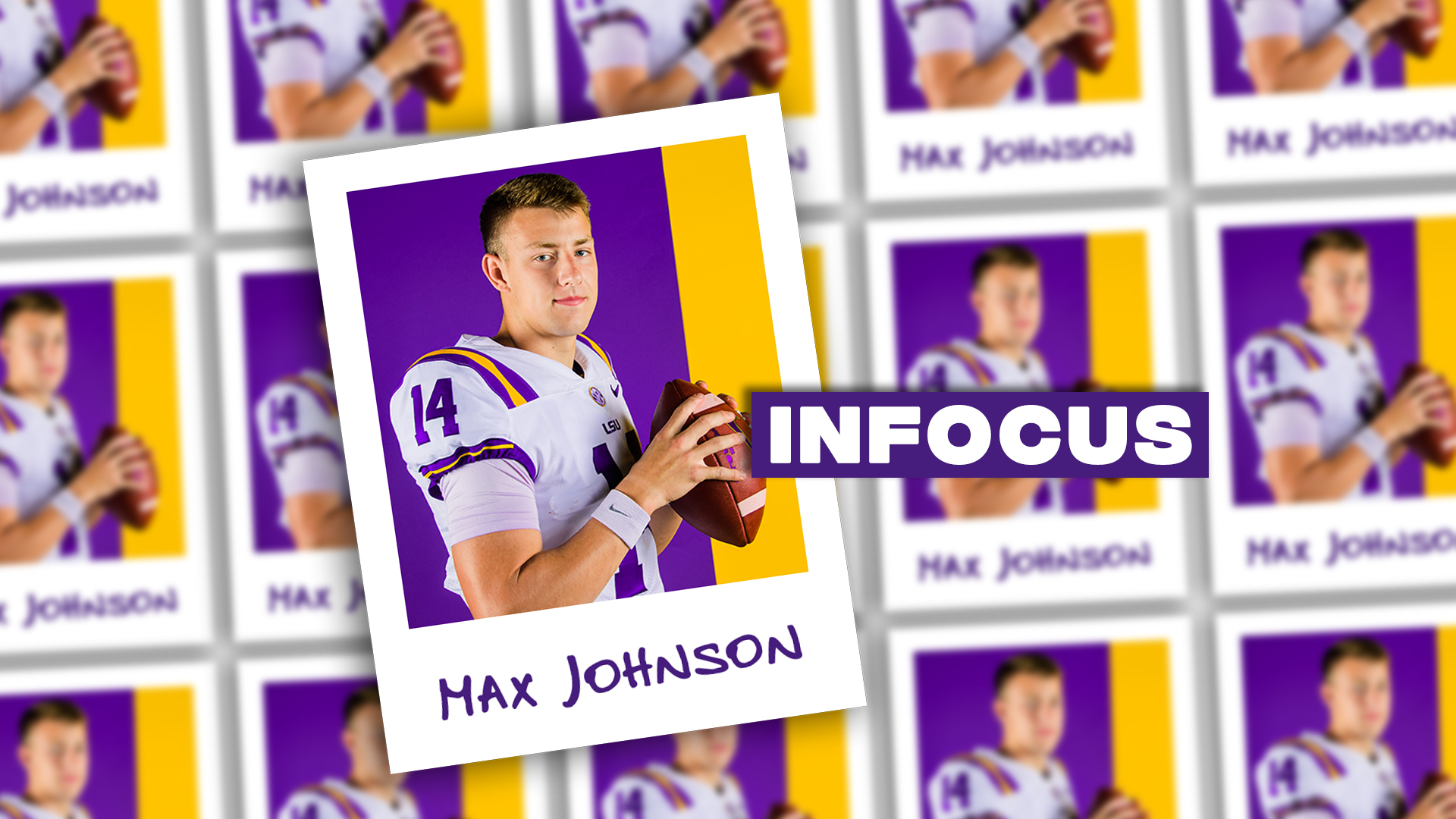 Max Johnson dreams of lifting national championship trophies while confetti falls from the sky. He aspires to hoist Heismans high overhead as the nation’s best player. Like most of his peers, he intends to add the sport’s most sought-after hardware to his personal collection.

If and when those dreams come true, however, the prize that will likely sit highest on his shelf forever is already in his possession.

It is shaped like a bird. It is painted a flaky gold. Its face is featureless, its legs long enough for Johnson to hold proudly. Attached to the front of this makeshift trophy is a notecard with a simple pen-crafted, two-lined inscription.

These are the spoils earned by the victor of the Best Brother Competition, a Johnson vs. Johnson pentathlon held some years back in a house built on competition. Max, the eldest Johnson son, claimed the victory over his younger brother in a pentathlon of sorts, which included contests in frisbee golf, Wii bowling, ping pong, pool, and shuffleboard.

The pride in Johnson’s voice when he describes the trophy ceremony is incapable of being fully communicated in print, but know that it is there, and it is obvious – just as obvious the pain he feels when admitting his little brother “might even be a little taller” than him these days.

“He had to hand me the trophy,” Johnson says, sitting up just a little taller as he says it, “and I got to write my name on it.”

Max Johnson, underlined for emphasis. The notecard on the trophy asked ‘Who’s Better?’ But the better question is, ‘Who’s More Competitive?’

To either question, regardless of the parameters, if your answer isn’t Max Johnson, you may want to double-check it.  And when Johnson plays, he plays for keeps and for fun, because in his world, work and fun are as inseparable as siblings.

“I think having fun while you work is the way it’s got to be,” Johnson says. “I think your work is your fun.”

THE COMBINATION OF competition and camaraderie, rivalry and revelry, hard work and hard play, it’s as much a part of the Johnson DNA as blonde hair and long limbs. It’s what happens when Dad is a Super Bowl-winning quarterback in Tampa Bay, Mom is a record-setting hitter at South Florida, and sons separated by – Max knows this number off the top of his head – one year, 11 months, and 19 days all eat, sleep and play under the same roof.

“Nikki, my wife, she always played with the kids when they were young,” says Brad, who was the starting quarterback for Super Bowl XXXVII Champions Tampa Bay Buccaneers. “There was always a game going on at all times. Kids were always over at our house and all the time. Whether they were playing games in the pool or basketball or frisbee golf or tag or something, it was constant.”

“Competition’s been big. It’s fun. It’s what we do. It’s not everything we do. But it’s definitely part of our household.”

Max didn’t just inherit his dad’s strong throwing arm. Brad also passed down to his children a modified version of The Quarterback Classic, an annual springtime competition between the quarterbacks of Florida State, where Brad starred from 1988 to 1991, and Georgia, where Max’s uncle, Mark Richt, served as head coach from 2001 until 2015.

Following every spring football season, Johnson and Richt would organize a get-together between quarterbacks of the two schools. They’d draw names out of a hat  and compete in eight events: coin toss, ping pong, pool, air hockey, bowling, darts, football accuracy, and football long toss. A point system was created, and a champion was determined. Over 40 quarterbacks competed in the classic over the years.

Eventually, the Johnson kids co-opted and re-branded the Classic into the aforementioned Best Brother Competition. Even when the ping pong balls stopped flying and the video game consoles were shut down, the brothers found a way to battle, whatever venue they found themselves in.

IT CONTINUES AT LSU, where Max has directed his competitive instincts at opponents and leveraged it into a record-setting start to his career under center. After throwing for five touchdowns in the Tigers’ 49-21 win over Central Michigan on September 18, Johnson became the first LSU quarterback to throw for three or more touchdowns in each of his first five starts.

On the field and in front of the media, he is a quiet competitor. Johnson prefers to let his game speak for himself, happy to throw compliments toward his teammates as accurately as he fires crossing routes over the middle of the field.

“He’s a competitor,” says head coach Ed Orgeron. “He’s serious. He reminds me of Joe [Burrow] in a lot of ways. The intangibles, the things he does, the work ethic, he wants to be number one.

Away from the cameras, Max is a little more chatty, especially when ping pong is in play. All those Best Brother games have paid off: he’s yet to lose at the table in the Mathieu Players Lounge inside of LSU’s Football Operations building.

“No one has beaten me,” he laughs, “but I’m looking forward to a challenger.”

Perhaps a matchup with Burrow, his well-decorated, similarly silent, and table-tennis adept predecessor, would offer a stiffer challenge.

It’s a mentality Max can’t shake, and wouldn’t if he could. It’s what brought him to LSU. He wasn’t afraid of the footprints Burrow left behind – he wants to walk his own path.

It’s also what propelled him through two quarterback competitions in the 2020 season – one in fall camp, and one after Myles Brennan’s midseason injury. Ask Brad how his son responded to not winning the job until later in the season, and he’s quick to correct.

“I wouldn’t say that. ​​I would say, he won every race he ever did on that field,” Brad says. “Just because he wasn’t playing doesn’t mean he didn’t win. You can ask every player on that team who’s trying to win every race, every day? Every day!”

According to Max, that’s what his father taught him. Frustration and  disappointment are just new opponents to conquer.

“I was frustrated at first for the first couple of days,” Max says, “but I didn’t want that to affect my play.

“I put my head down, kept working, and I think that’s what gained the respect of my teammates and my coaches. When the time happened to get my chance, I think I was ready for it.”

Ask Florida and Ole Miss, who Johnson helped the Tigers defeat to close 2020, if he was ready. Ask UCLA, who beat the Tigers to start 2021 but never saw Johnson back down. Ask McNeese, Central Michigan and Mississippi State, who were picked apart by a sharper, always-improving Johnson.

Ask his brother, who handed him that trophy and has heard about it regularly since. Ask his parents, who admire their son’s coachability and willingness to learn from – but refusal to crumble under – adversity.

Or just ask Max, who will finish an interview, after 10 minutes of questioning, with two questions of his own: “How did I do, and what can I do to get better?”

There’s no one who competes like Max Johnson. And no one has more fun doing it.