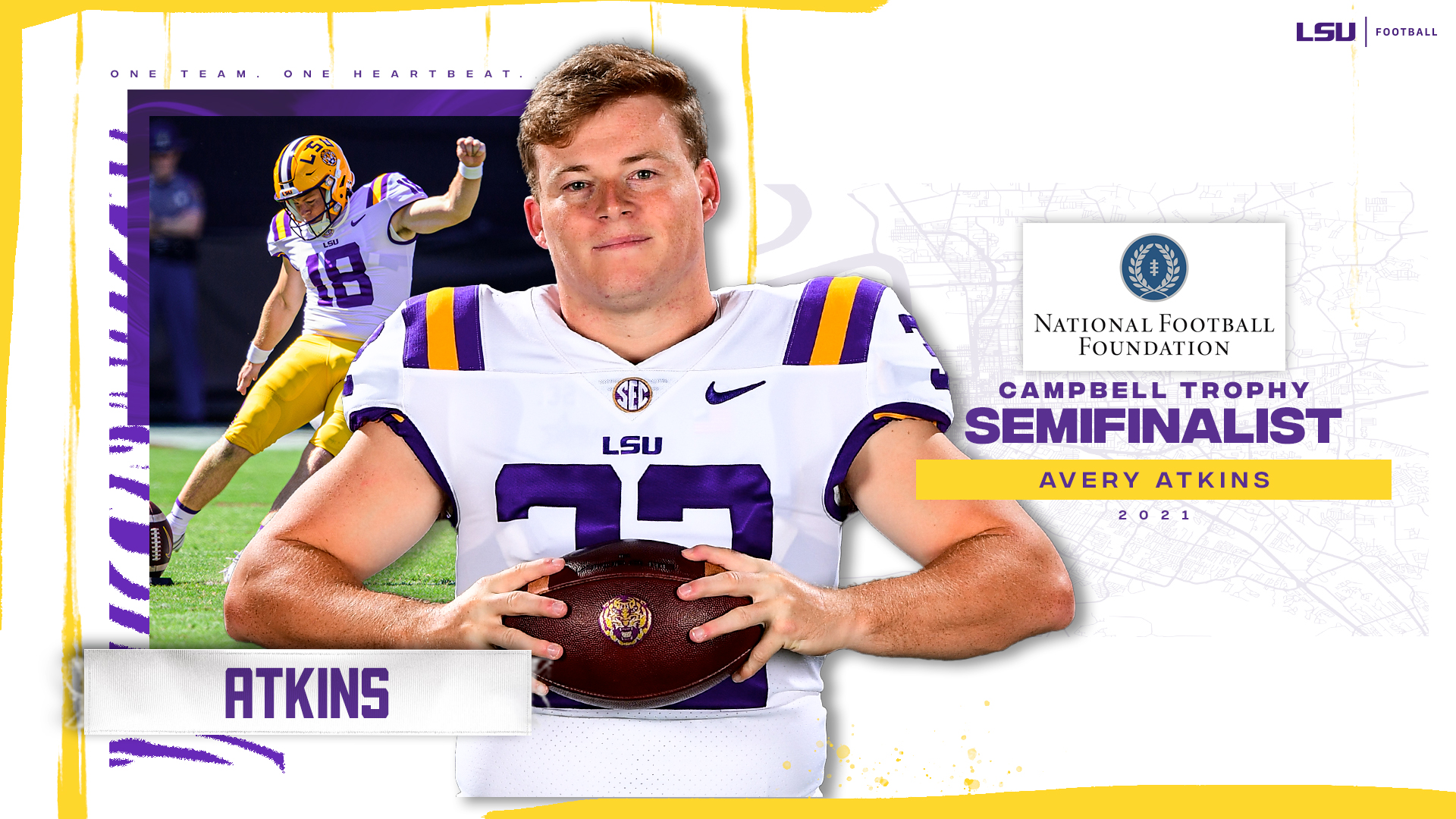 Celebrating its 32nd year, the Campbell Trophy recognizes an individual as the absolute best football scholar-athlete in the nation for his combined academic success, football performance and exemplary leadership.

Atkins, a senior from Auburn, Alabama, is a three-time member of the SEC Academic Honor Roll and graduated in May of 2021 with a degree in Human Sciences/Pre-Med. Atkins, who graduated with a 3.62 grade point average, plans to attend medical school.

On the field, Atkins holds every LSU kickoff record – both single-season and career. Now in his fourth year with the Tigers, Atkins is the school record holder for kickoffs (294), kickoff yards (18,543), and touchbacks (247).

Atkins emerged as LSU’s starting punter in 2021 and is currently averaging 40.5 yards on 22 punts. He’s had three punts of 50 yards or longer and 10 of his 22 punts have been downed inside the 20-yard line.

“These 176 impressive candidates truly represent the scholar-athlete ideal,” said NFF Chairman Archie Manning, whose sons Peyton (Campbell Trophy® winner) and Eli were named NFF National Scholar-Athletes in 1997 and 2003, respectively. “For more than 60 years, the NFF National Scholar-Athlete Awards have honored more than 800 college football players who have been successful on the football field, in the classroom and as leaders in the community. And we are excited to celebrate the 32nd year of the Campbell Trophy®, which honors the best of the best. This year’s semifinalists further illustrate the power of our great sport in developing the next generation of influential leaders.”

The NFF will announce 12-14 finalists on Oct. 27, and each of them will receive an $18,000 postgraduate scholarship as a member of the 2021 NFF National Scholar-Athlete Class Presented by Fidelity Investments. The finalists will travel to the ARIA Resort & Casino Las Vegas for the 63rd NFF Annual Awards Dinner Presented by Las Vegas on Dec. 7, where their accomplishments will be highlighted in front of one of the most powerful audiences in all of sports. Live during the event, one member of the class will be declared as the winner of the 32nd Campbell Trophy® and have his postgraduate scholarship increased to $25,000.

Nominated by their schools, which are limited to one nominee each, candidates for the awards must be a senior or graduate student in their final year of playing eligibility, have a GPA of at least 3.2 on a 4.0 scale, have outstanding football ability as a first team player or significant contributor and have demonstrated strong leadership and citizenship. The class is selected each year by the NFF Awards Committee, which is comprised of a nationally recognized group of media, College Football Hall of Famers and athletics administrators.

“The NFF would like to personally congratulate each of the nominees as well as their schools and coaches on their tremendous accomplishments,” said NFF President & CEO Steve Hatchell. “We are extremely proud to highlight each semifinalist’s achievements, showcasing their ability to balance academics and athletics at the highest level. The NFF Awards Committee will have an incredibly difficult task in selecting the finalists from this outstanding group of candidates.”