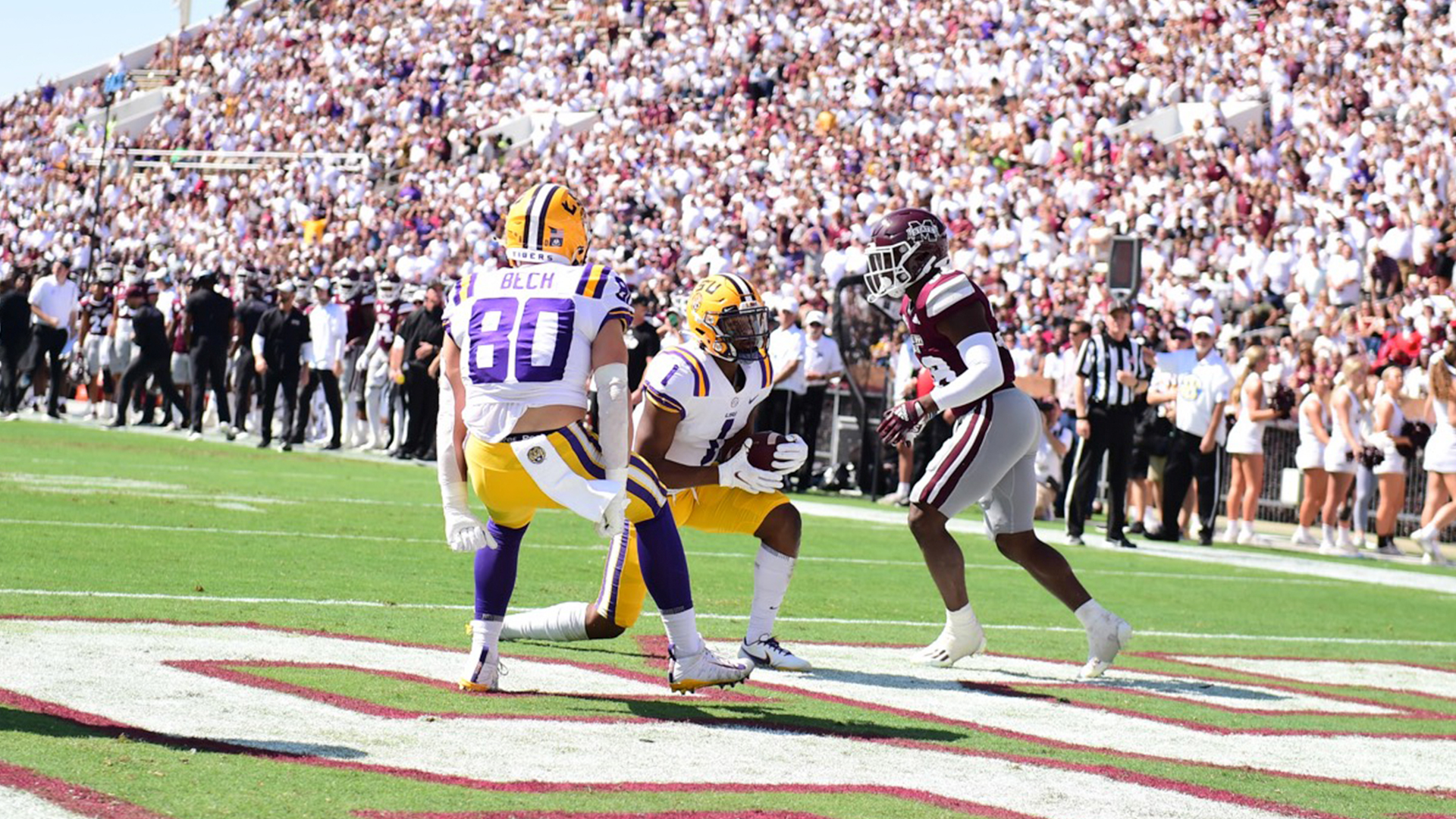 STARKVILLE, Miss. — Max Johnson passed for 280 yards and four touchdowns, as the LSU Football team earned a 28-25 victory in the SEC opener on Saturday at Davis Wade Stadium.

Johnson, a sophomore, became the first Tiger since Rohan Davey in 1999 to throw three touchdown passes of 40-plus yards in a single game. He finished 17-of-27 passing with touchdowns of 11 and 64 yards to wide receiver Kayshon Boutte, 58 to wide receiver Trey Palmer and 41 to tight end Kole Taylor that put his Tigers ahead 28-10 with 11:32 to play.

Meanwhile, LSU’s defense executed its dime package – six defensive backs – and kept the ball in front of itself for a vast majority of the contest. The Tigers “bend don’t break” exercise resulted in a pair of first-quarter turnovers forced by nickelback Cordale Flott on the LSU side of the field and later a three-score lead in the fourth quarter when State rallied for a pair of touchdowns to make the game interesting.

State quarterback Will Rogers finished 47-of-62 passing for 371 yards with three touchdowns and an interception. His 62 pass attempts were the fourth-most by an LSU opposing quarterback in program history (record: 72 by Troy’s Levi Brown in 2008).

LSU (3-1, 1-0 SEC) returns to action on Saturday, Oct. 2, when Auburn visits Tiger Stadium for an 8 p.m. CT kickoff. A limited number of tickets are available now at LSUtix.net. The game will be televised by ESPN and broadcast on the LSU Sports Radio Network beginning at 6 p.m.

Mississippi State fell to 2-2 overall and 0-1 in the SEC.

Mississippi State won the coin toss and elected to put its high powered offense on the field first. LSU responded in kind, showing its dime defense (6 defensive backs) for the first time since facing Patrick Mahomes and Texas Tech in the 2015 Texas Bowl.

The Tigers took advantage of Mississippi State’s first mistake of the game, as nickel back Cordale Flott forced a fumble with a tackle of wide receiver Malik Heath at the LSU 30-yard line. LSU linebacker Damone Clark returned the loose ball 35 yards to State 35 and the Tigers offense did the rest.

On third-and-9 from the State 11, Johnson avoided the rush and stepped to his left where Boutte was dragging across the end zone for his seventh touchdown catch of the season. Cade York added the PAT and LSU led 7-0 with 9:04 to play in the opening quarter.

Following consecutive punts, Flott forced his second turnover of the quarter when he intercepted Rogers’ pass at the LSU 11 to stop a promising MSU advance.

Though LSU’s running game got untracked by Davis-Price, a third-down pass to Boutte was knocked away and the Avery Atkins entered for a 52-yard punt.

State’s first scoring drive of the game took 14 plays and spanned 80 yards. However, after LSU called a timeout to bring in another defensive tackle, a third-and-goal run was stuffed by LSU defensive end BJ Ojulari, linebacker Micah Baskerville and a host of Tigers in the backfield. The Bulldogs elected to take three points with a 23-yard Nolan McCord field goal.

LSU wasn’t able to take advantage of a 24-yard punt return by Trey Palmer with 3:59 left in the half, as Johnson’s third-and-16 pass to Brian Thomas Jr. came up two yards short of the first down at the MSU 41 yard line. After thinking about the options – run a fourth-down play with 90 seconds left in the half, try a 58-yard field goal, or punt – LSU took its second timeout before electing to punt to the State 10 with 41 seconds to play in the half.

State played it safe, too, while deep it its territory and the half ended with LSU ahead 7-3 at the half.

LSU’s decision to wait until the third quarter for its next points paid off in spades. After a tough 11-yard run by Davis-Price on the first play of the half, Johnson drew the safety to the line with fake handoff to Davis-Price before connecting with Boutte across the middle for a 64-yard catch-and-run for a touchdown. The play moved the sophomore wide receiver past 1,000 career yards.

State’s offense once against methodically dumped and dinked for 14 plays to the LSU 15. When the drive stalled following consecutive incomplete passes from Rogers, McCord pulled his 33-yard field goal attempt to the left and LSU took over at its 20 with 8:55 remaining in the quarter.

LSU gained a pair of first downs with a 7-yard run by Corey Kiner and a 10-yard catch by wide receiver Jaray Jenkins, but Johnson’s third-and-7 scramble came up 2 yards short and LSU punted into the end zone.

Following a quick three-and-out forced by its defense, LSU immediately looked for an explosive play and got it. With plenty of time in the pocket, Johnson found Palmer completely alone in the State secondary when three Bulldogs defenders covered Boutte and Deion Smith. Palmer made a basket catch at the 10 and slowly skipped into the end zone for a 58-yard touchdown.

The Bulldogs responded with a touchdown drive of their own, advancing to the LSU 29 without facing a third down. Rogers connected with junior wide receivers Makai Polk for a touchdown on the right side of the field with 26 seconds left in the quarter.

LSU got a break early in the fourth quarter when Atkins was roughed on a 43-yard punt, giving the Tigers new life at the MSU 48. Three plays later, Johnson found tight end Kole Taylor on third-and-3 for a 41-yard touchdown reception. Taylor sprung loose on the play when a pair of State defenders collided just after the catch.

As the Tigers continued to play safe defensively, Mississippi State took short passes to the LSU 3-yard line where Rogers connected with Austin Williams for a TD pass at the goal line.

With LSU’s hands team ready for an onside kick, State took delay of game penalty prior to the kick and decided to kick deep. Josh Williams’ fair catch game LSU the ball at its 25. LSU was unable to pick up a first down and punted to the State 32 with 5:36 to play.

Rogers and the State offense again took what LSU’s defense gave them, slowly working its way into Tigers territory as the clock crept under 3:00 and the home supporters chirped. On third-and-10 from the LSU 16, Rogers side-armed a pass to Jo’quavious Marks who ran untouched along the right sideline for a touchdown. The two-point conversion pass from Rogers to Heath was successful and Mississippi State trailed 28-25 with 1:53 remaining.

The ensuing onside kick was touched by Marks before traveling 10 yards, and LSU took over at the State 41 with 1:53 to play. The Bulldogs had one timeout remaining but decided to ask for a video review of the play, spending its final timeout and allowing LSU to get into the victory formation.