With so much out of her control, Molly Thompson focused in on the things firmly in her grasp. 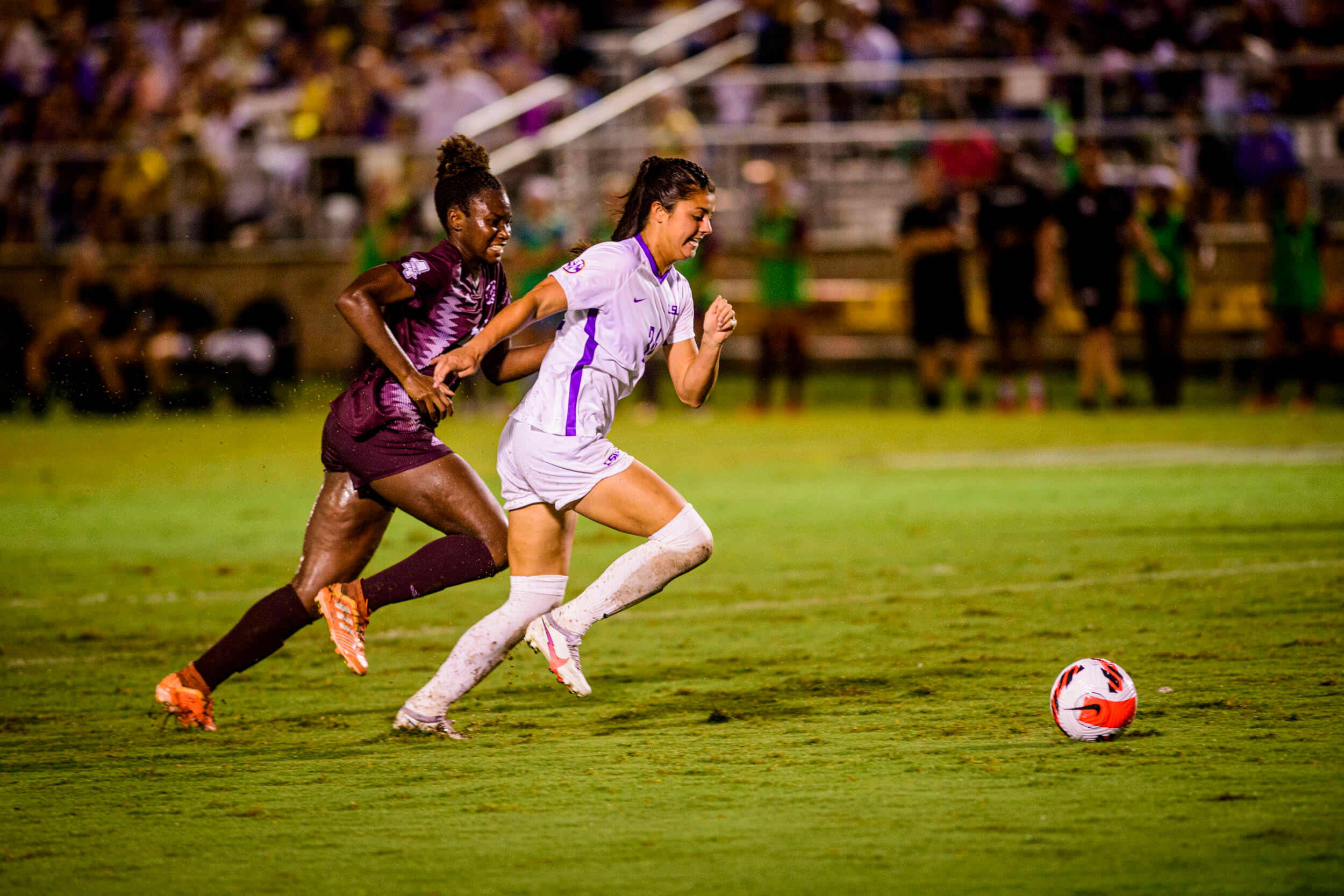 Molly Thompson felt like there was nothing she could do.

With Hurricane Ida barreling toward the state of Louisiana, and more specifically in the direction of her hometown of Houma, being away from friends and family left her feeling hopeless.

But with so much out of her control, she focused in on the things firmly in her grasp: beating Central Florida, just hours before Ida made landfall, and scoring a goal for those back home.

“Being from Louisiana, and being able to represent my state on such an amazing team is something that I’m so grateful for,” Thompson said. “If this is one way that I can help my city and my state, I want to use this platform to help them out and keep their spirits up.”

Molly’s parents, Amy and Claude, were actually able to catch the game at a nearby family home running on generator power, but when the power went out for a brief moment, and they waited three-four minutes to regain it, Molly scored within that time frame. They missed the goal.

“During that time, she had scored,” Claude said. “We saw on Twitter that Molly scored, but we didn’t care (about missing it). We were just so happy that she was able to get a ball in the net.”

Tigers on 🔝 at the break thanks to Molly Thompson’s goal in the 22nd minute.

The full force of the storm hadn’t hit the city of Houma yet — at that moment the eye was still lurking up the coast. But shortly after the game concluded, the conditions quickly deteriorated, and it was then when Thompson, on an away trip in Orlando, could barely reach her parents.

Last-minute phone calls to friends and family, and donations to the Cajun Navy, were things she could manage. Her parents told her not to worry, to play her game, and to play for them.

“We wanted to contact her to let her know we were okay,” Claude said. “We tried our best with text messages. We knew that we were going to be very inconvenienced for a long time, but we did have food, water and shelter.”

As the city of Houma, and other parts of Louisiana continue their relief efforts, Thompson feels like LSU’s eleven game win streak has provided some relief within itself for many, uplifting spirits during trying times.

“I do think so,” Thompson said when asked if she thinks the Tigers are providing a sense of hope. “I’ve definitely been getting messages and my parents have been telling me that a lot of people (in Houma) have been talking about the success of our team and how it’s really been uplifting their spirits, which makes me really happy and proud to be from Houma.”

On the Monday of Labor Day Weekend, Thompson visited Houma. Among the devastation, she saw downed power lines down, a number of Entergy trucks, and a lot of clean up taking place. You could see massive trees that had fallen down, which thankfully, she says, hadn’t hit the nearby houses.

It was a return home she hoped she’d never have to experience.

“There was a lot of devastation around me, which was really heartbreaking to see,” Thompson said. “When I went through my neighborhood, there was debris everywhere. The power was still out, there was no water, no gas, so that was kind of hard to take in.”

But there was no time to waste. Recovery efforts were underway and Molly’s mom, Amy, helped distribute gas in the community to miles and miles of cars. It was a slow process, but a rewarding one, as she handed out 23 gallons per car. The desperation in the eyes of many was sobering.

A week later, Thompson scored a hat trick against Louisiana-Lafayette, earning SEC Offensive Player of the Week honors from the league office the following Monday (Sept. 13). The goals were sweet, and so was the win, but embracing her parents after the game and thinking about those back home was even sweeter.

SEC Offensive Player of the Week

“All I could remember thinking about was going to my parents after the game because that meant so much to them,” Thompson said. “The fact that I get to be a part of something so much bigger than myself is really special to me.”

Thompson feels the love — from her parents, from her friends, and from her support group back home. But she also loves her team. Each win is a team win, and she wouldn’t have it any other way.

“Something that’s so special about this team is there’s not one person that’s carrying us,” Thompson said. “There’s so many people that can contribute, we have such a great bench. From our coaching staff, to our managers, our trainers, everyone is pulling their weight.”

That’s a perfect metaphor, not only for LSU’s soccer team, but for the state of Louisiana and the city of Houma as they recover from the devastation of Hurricane Ida.

Louisiana will get through this, but we all have to play a role. Everyone has to pull their own weight.

Whether it’s the sixth-ranked Tigers, or those affected by Ida, they all share important qualities in common: resilience and grit.

There’s still a lot of work to be done, both for the Tigers and the relief efforts in surrounding communities, but those are two traits that will lead each through the journey ahead.