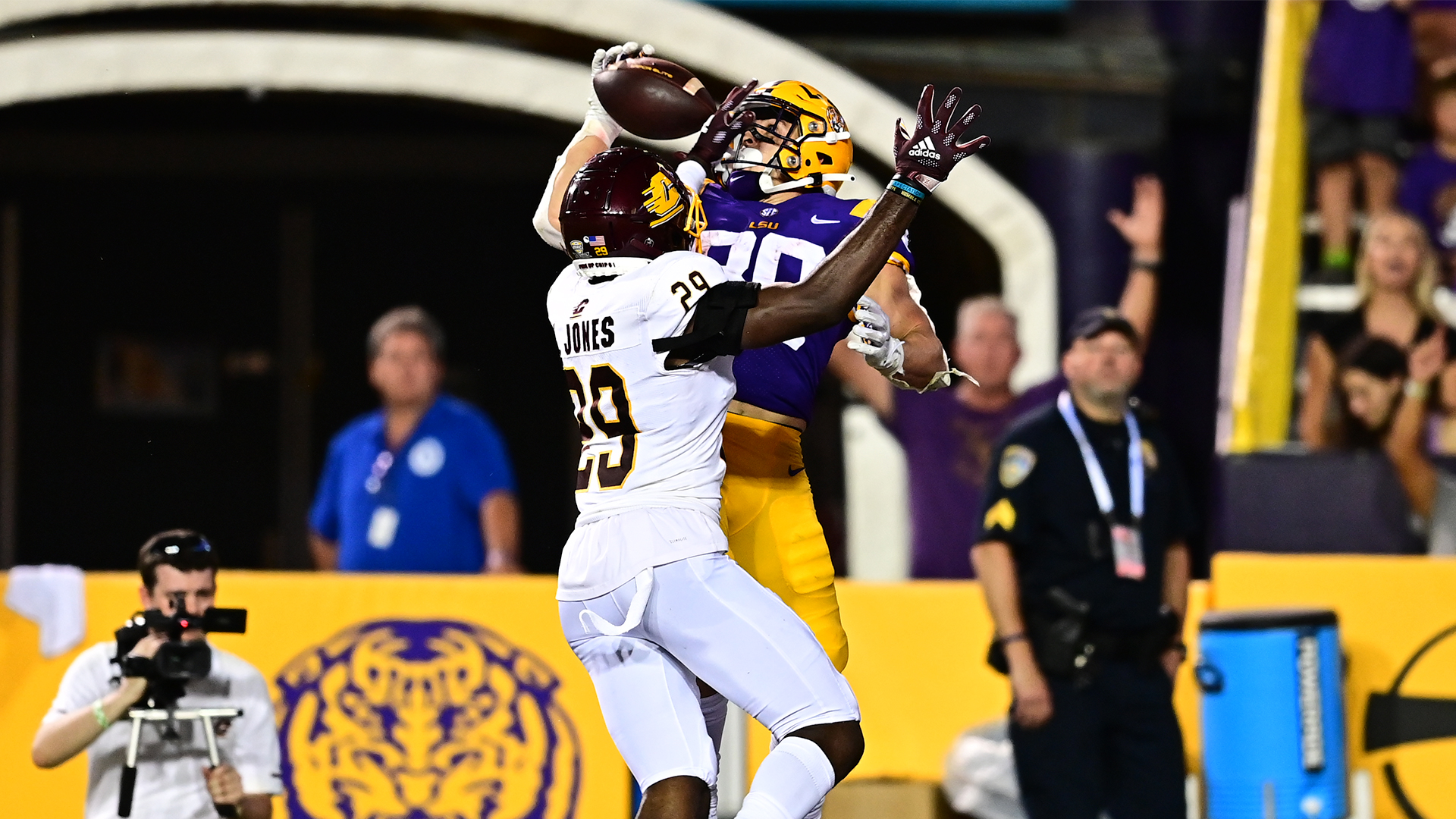 Johnson, who played only 2 1/2 quarters, finished 26-of-35 passing for 372 yards with five touchdowns and an interception. The sophomore has thrown for at least three TD’s in the first five starts in his career, a first by an LSU player.

Freshman Corey Kiner paved the way on the ground for the Tigers, rushing 12 times for 74 yards with a 5-yard touchdown run.

Defensively, LSU defensive end Andre Anthony picked up a fumble and scored with a 33-yard return in for LSU’s second touchdown of the contest with 10:05 left in the first quarter. The Tigers had 15 tackles for loss including five sacks and an interception by safety Major Burns .

Central Michigan’s scores came on 78-yard touchdown reception with 25 seconds left in the first quarter on a busted coverage, a 20-yard interception return and an 18-yard pass with 10:47 left in the contest.

LSU outgained Central Michigan, 484-284 – 117 of CMU’s yards were gained in the fourth quarter when most Tigers starters gave way to reserves.

LSU (2-1) opens Southeastern Conference play on Saturday, Sept. 25, at 11 a.m. CT when the Tigers travel to Starkville to face Mississippi State. The game will be televised by ESPN, with pregame on the LSU Sports Radio Network starts at 9 a.m.

LSU took the opening kickoff and moved 65 yards in eight plays to grab a 7-0 lead with 11:48 left in the first quarter. The drive was capped by a 28-yard TD pass from Johnson to Smith, who made his third career catch and his first for a touchdown.

The Tigers’ lead surged to 14-0 on Central Michigan’s first offensive possession, when cornerback Derek Stingley Jr. forced running back Darius Bracy to fumble after catching a pass, and Anthony returned the ball 33 yards for a score at the 10:05 mark of the first period.

The touchdown was the first career score for Anthony, who is in his sixth season at LSU. It was also the first fumble return for a TD by LSU since November 18, 2018, when linebacker Michael Divinity Jr. dashed 58 yards after a recovery at Texas A&M.

LSU created another turnover on the Chippewas’ next possession, when Burns intercepted a Jacob Sirmon pass and the Tigers took over at the CMU 45-yard line. The Central Michigan defense forced an LSU punt after the ensuing three plays, but punter Avery Atkins’ kick pinned the Chippewas at their own six-yard line.

The LSU defense recorded a three-and-out, and after a CMU punt, the Tigers promptly drove 63 yards in three plays as Johnson connected with Smith again, this time on a 40-yard scoring pass with still 1:52 remaining in the opening period.

The Chippewas narrowed the deficit to 21-7 on their next possession, when Sirmon hit wide receiver JaCorey Sullivan alone near the CMU sideline, and he sprinted to the end zone on a play that covered 78 yards.

The Tigers’ lead increased to 28-7 at the 6:54 mark of the first half, when Johnson flipped a two-yard scoring pass to Boutte. The play culminated a 12-play, 65-yard march.

Johnson and Bech combined to lead the Tigers’ to their next six-pointer, as they highlighted a four-play, 92-yard drive with connections of 31 yards on 2nd-and-10 from the LSU 8, and later 20 yards for a touchdown with 2:15 left before halftime.

The TD reception was the first of Bech’s career, and the march also featured a 41-yard completion from Johnson to wide receiver Brian Thomas Jr. to the Central Michigan 20.

Johnson threw his fifth TD pass of the game with 9:34 left in the third period, as he connected with wide receiver Devonta Lee on a 21-yard completion, capping a nine-play, 93-yard drive. The reception represented the first career touchdown catch for Lee, who is in his third year in the LSU program.

Central Michigan forced LSU’s first turnover of the game at the 5:41 mark of the third quarter when defensive back Devonni Reed intercepted a Johnson pass and returned it 20 yards for a touchdown, reducing the Tigers’ lead to 42-14.

CMU backup quarterback Daniel Richardson led the Chippewas on a scoring drive early in the fourth quarter, capping a 12-play, 50-yard march with a TD strike to tight Joel Wilson, cutting the deficit to 42-21 with 10:47 remaining in the game.

LSU backup quarterback Garrett Nussmeier responded by leading a touchdown drive of his own that was culminated by Kiner’s 5-yard scoring burst. The TD culminated a six-play, 75-yard possession that gave the Tigers a 49-21 advantage at the 7:19 mark of the contest.