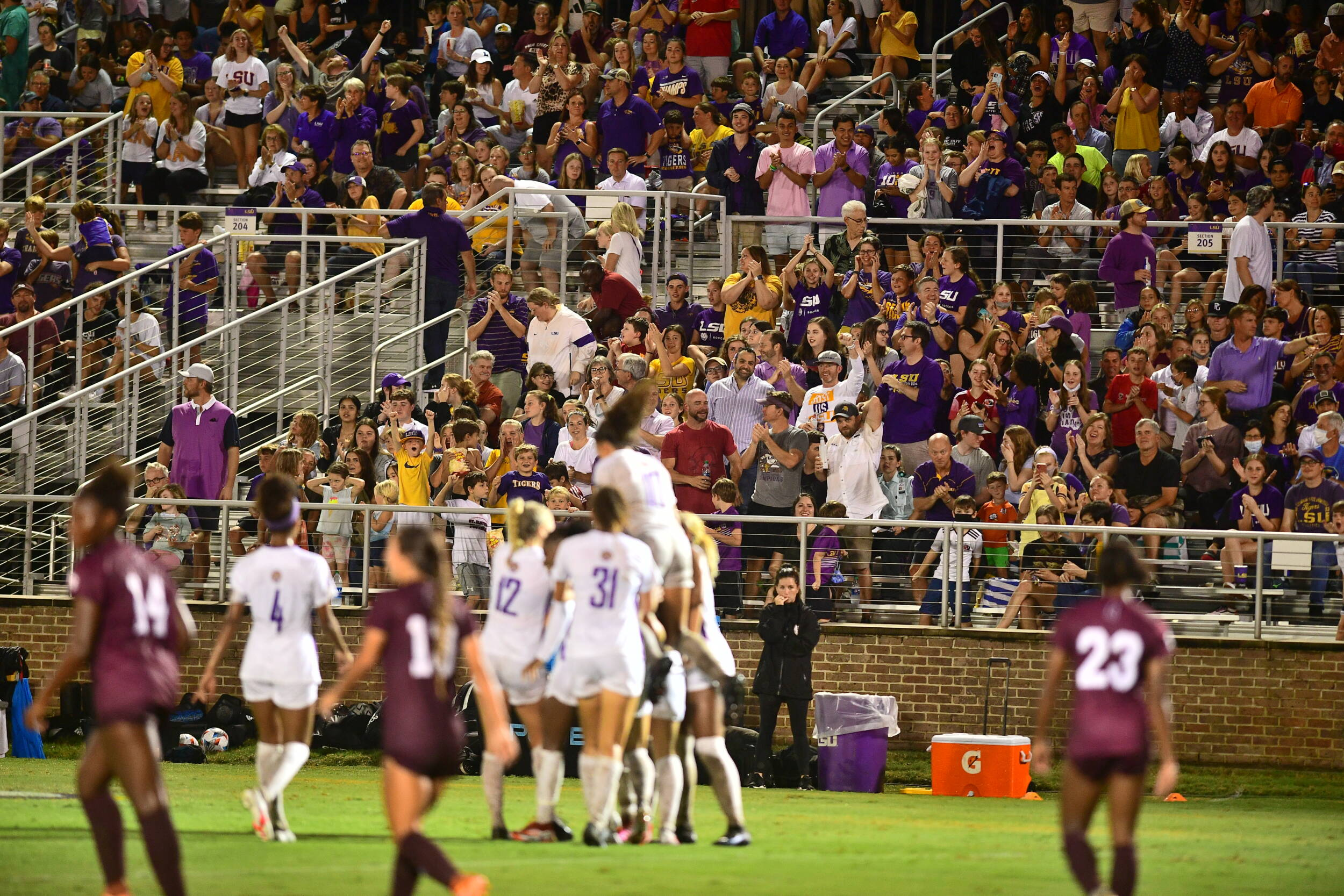 Baton Rouge, La. – In front of an LSU Soccer Stadium record-breaking crowd of 3,021 people, the No. 6 LSU Soccer team (8-0-0, 1-0-0 SEC)  opened SEC play with a 2-0 win over Mississippi State (2-3-2, 0-1-0 SEC) on Friday night. The Tigers’ two goals came from a corner in the 28th minute ruled an own goal before forward Tinaya Alexander finessed a beautiful goal with her left foot from the top of the box to double the lead in the 34th minute.

“First off, we want to thank this record-breaking crowd for such an electric atmosphere,” head coach Sian Hudson said. “To open SEC play like that with factors such as a huge crowd and a tough playing surface was a great performance from the team. The players dealt with the challenges handed to them and created some great moments for them and made things difficult for Mississippi State.”

The Tigers opened the match on the attacking foot and pressured the Bulldog defense from the get-go, registering three shots in the first ten minutes. The first big chance of the night came in the 14th minute as midfielder Maddie Moreau sent a pass across the face of goal to forward Alesia Garcia, whose first-time effort from seven yards out trickled narrowly wide. LSU had another chance at goal in the 18th minute when midfielder Athena Kuehn sent in two efforts, one being blocked by a Bulldog defender and the other saved by goalkeeper Maddy Anderson.

The breakthrough came in the 28th minute. Defender Grace Haggerty swung in a corner that was miscleared by a Bulldog defender and bounced over the line and into the back of the net. In the run of play, the Tigers took a 1-0 lead on the night.

Six minutes later in the 34th minute, defender Lindsi Jennings laid a ball off to Alexander, who took two touches and ripped a shot on her left foot from the top of the box that just dipped under the crossbar and into the back of the net. The goal takes Alexander’s tally to a team-leading seven on the season, with Jennings’ assist being her first as a Tiger.

She Wild With The Left

The Tigers tested Bulldog goalkeeper Maddie Anderson two more times in the first half, with forward Molly Thompson sending a shot on target in the 36th minute and midfielder Jordan Johnson repeating the effort in the 39th minute that saw Anderson stop both shots.

LSU goalkeeper Mollee Swift came up big for the Tigers right before halftime in the 42nd minute, blocking a strong shot from Marcella Cash before picking up her second save only twenty seconds later, this time collecting a ground shot from Hannah Telleysh to keep LSU’s lead at 2-0 going into the break.

The second half saw LSU maintain their control of the match, holding the Bulldogs to no chances on target. The Tigers nearly added to their lead with two close chances. Midfielder Chiara Ritchie-Williams blasted a low shot from outside the box in the 51st minute that just narrowly missed the frame of goal. Garcia had the other best chance of the half as her shot from twelve yards out rattled the crossbar in the 72nd minute.

Swift kept her defense organized in the second half and finished the match with two saves and picked up LSU’s fifth clean sheet of the season.

Despite the wet field, LSU outshot Mississippi State by a margin of 19-7. The Tigers maintained control of the match through their strong possession play, outpossessing the Bulldogs by a margin of 59% to 41%.

The win is the first win in an SEC opening match for the Tigers since 2013 when LSU beat Vanderbilt 2-1 in overtime. With the win, LSU’s NCAA-leading win streak increases to 11 consecutive matches.

No. 6 LSU will travel to Oxford, Mississippi to take on Ole Miss at 6 p.m. CT on Thursday, September 23.