Nothing has been given to Damone Clark. His starting role, the No. 18, the respect of his teammates - he’s earned every bit of it. 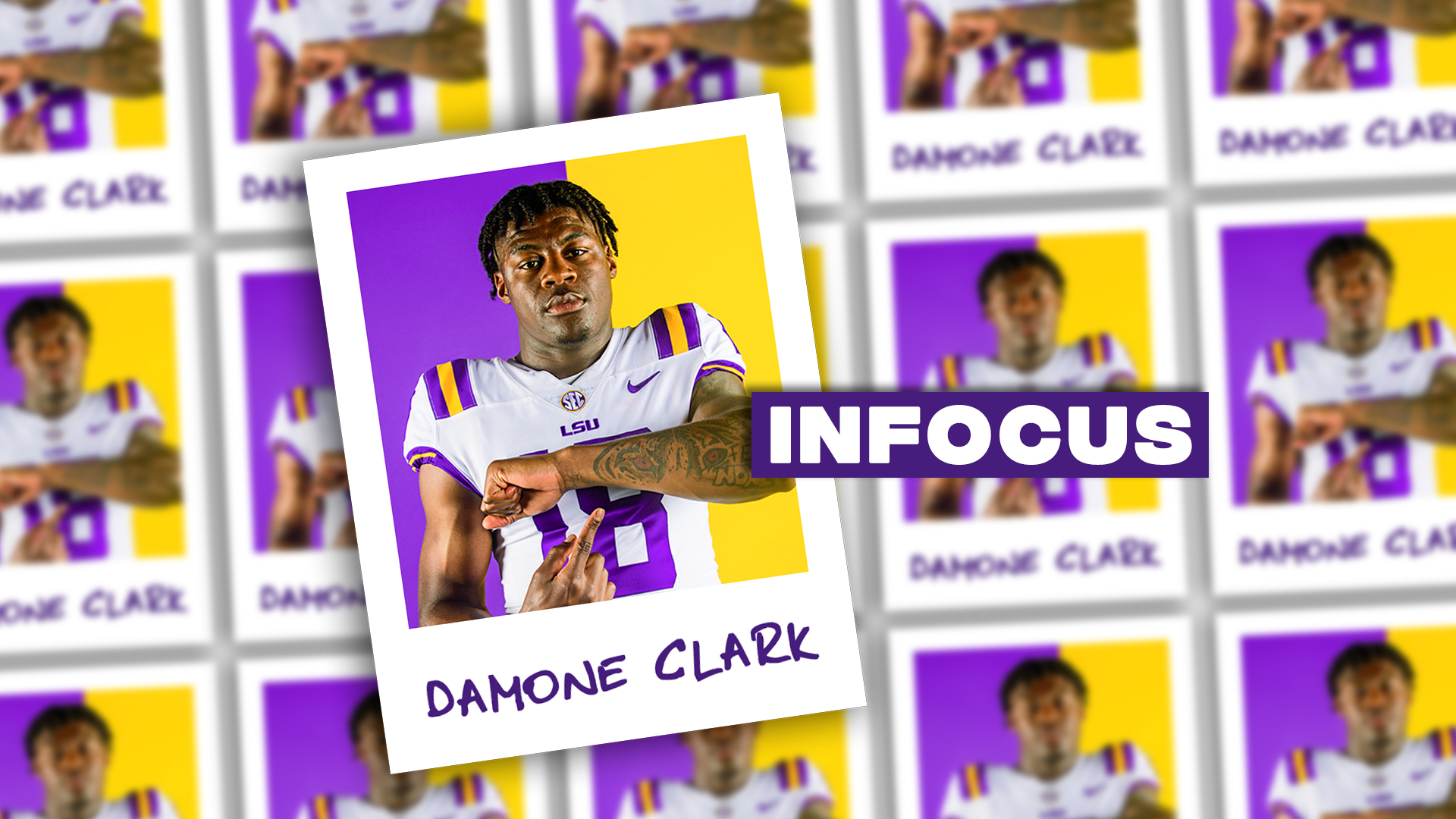 Nothing has been given to Damone Clark.

His starting role, the No. 18, the respect of his teammates — he’s earned every bit of it.

Stepping on campus as a four-star prospect out of high school, Clark has learned a thing or two about patience since then. He’s learned how to stay level-headed, that hard work pays off, and good things come to those who wait. He’s living proof of that.

After not seeing the playing time he wanted early in his career, Clark waited his turn, battled his way up the depth chart and showed that his resiliency knows no limitations, using hardships of the past as fuel for the future.

Born in New Orleans, Clark moved to Baton Rouge in 2005 as a five-year-old following Hurricane Katrina. The toughness he exhibits has never been just specific to the playing field, it’s a characteristic that he’s been forced to manifest his entire life.

“I had it hard growing up,” Clark said. “Hurricane Katrina and the floods of 2016 made me toughen up. It showed me that everything wasn’t promised. We lost everything we had – twice. We just had to start over again.”

From that moment forward, Clark made a promise to his mom. He told her he would graduate high school, play football in college and get his diploma. He’s on track to complete all three among other accomplishments.

His family keeps him going, even on the days when he feels like slowing down.

A national champion and a veteran in LSU’s defense, Clark was awarded the legendary No. 18 before the 2020 season, an honor he didn’t take lightly.

Head coach Ed Orgeron said many players were worthy of the coveted number, but only two checked every box, and Clark was one of them. A Baton Rouge product, Clark understood as well as anyone the significance of that number, and was honored to represent those who came before him.

“I’m blessed and honored to wear No. 18,” Clark said. “It means a lot, just being a guy from Louisiana, growing up watching LSU play, envisioning myself walking down Victory Hill and running out of the tunnel. It’s really surreal, but I’m honored.”

It’s not easy stepping into a starting role, especially when it’s behind Butkus Award winner Devin White and a first-round selection like Patrick Queen. When you walk into the linebacker room, you see their faces on the walls. Those are intimidating footsteps to follow, but Clark has handled it well like many expected he would.

“One of the main things I learned from Devin and Patrick was that everything is going to come to you,” Clark said. “Just be patient, don’t rush everything, because good things come to those that wait.”

Sure, Clark leaned on White and Queen for guidance, but he didn’t want to be compared to them. He wants to write his own story, and his main goal is to be the best Damone Clark that he can be.

In spring practice, Coach O called Clark one of the most improved players, as the 6-foot-3, 240-pound backer made an effort to correct the mistakes of 2020 to achieve the 2021 campaign he wanted for himself. He’s focused on being more aggressive at the point of attack and trusting his tendencies this season.

“Last year, a lot of the times, I second guessed myself,” Clark said. “I’m not going to second guess myself this year. One of the biggest things I’ve been working on is using my hands more, creating separation.”

Through two games, Clark leads the team in tackles (21) with an impressive game-high 14 stops in the season opener against UCLA and seven tackles against McNeese. The Baton Rouge product hopes that a fast start will springboard him into the type of season he knows he’s capable of having.

As a senior leader in the Tigers’ defense, Clark understands the role he needs to play. Team chemistry was a major focus this offseason — players and coaches included — and Clark has noticed a unique bond among everyone in the building. There’s something different about this group, Clark says, and he hopes that translates into wins come Saturdays.

“The team that we have right now, this is the closest we’ve ever been,” Clark said about LSU’s chemistry. “Some of us are watching film together outside of football, hanging with each other. Continuing to build our brotherhood. You can tell each day, we love to be around each other.”

He’s attributed his improvements to first-year linebackers coach Blake Baker, who Clark says is one of the most unique coaches he’s ever been around. Baker has provided Clark with a newfound confidence, teaching him more in a few months’ time than he’s ever been taught before. When speaking about Baker to the media, Clark couldn’t hold back his smile, grinning from ear-to-ear with excitement about what his new coach brings to the table.

“Coach Baker might be one of the coolest coaches that I’ve ever met,” Clark said. “He’s taught me a lot in a short period of time that he’s been here. He’s one of the guys that told me I’m going to correct the errors, to not second guess myself, and to go out there and pull the trigger.“Having a spring with (the coaches), being able to sit down, watch film with them, understand the scheme, it’s built my confidence back up,” Clark added. “Coach Baker’s style of teaching is just different. He’s able to interact and get the playbook through well with all the linebackers.”

Coming out of spring ball, Clark was primed to start alongside Jared Small, a former walk-on who earned a scholarship last fall. But with Small suffering a season-ending injury in camp, Clark’s leadership role proves to be that much more important, a responsibility he’s more than capable of handling.

It’s that burden of leadership that Clark craved when he was on the sidelines his freshman year. He realizes that pressure is a privilege, and he’s prepared to seize the moment.

Nothing has been handed to Clark, and he doesn’t expect that to change anytime soon. He’s earned everything — and if you asked him, he probably wouldn’t have it any other way.

But even as a national champion, a leader wearing No. 18 and everything that comes with being an LSU Tiger, there’s one thing for certain: there isn’t a day that goes by where he takes it for granted.

He’s grateful, but never satisfied. He waited his turn, and he’s as eager as ever to write his own story and cement his own legacy.

“I’m honored just to wear the purple and gold,” Clark said. “Watching all the guys before me that paved the way, and now I get to play for my hometown — it’s still surreal.”