Dr. Sam Nader comes from humble beginnings and he has remained that way. He’s the son of a traveling minister and is still devout in his Christian faith. When asked about him, you frequently hear words like “kind,” “humble,” “selfless,” or simply “the best.” 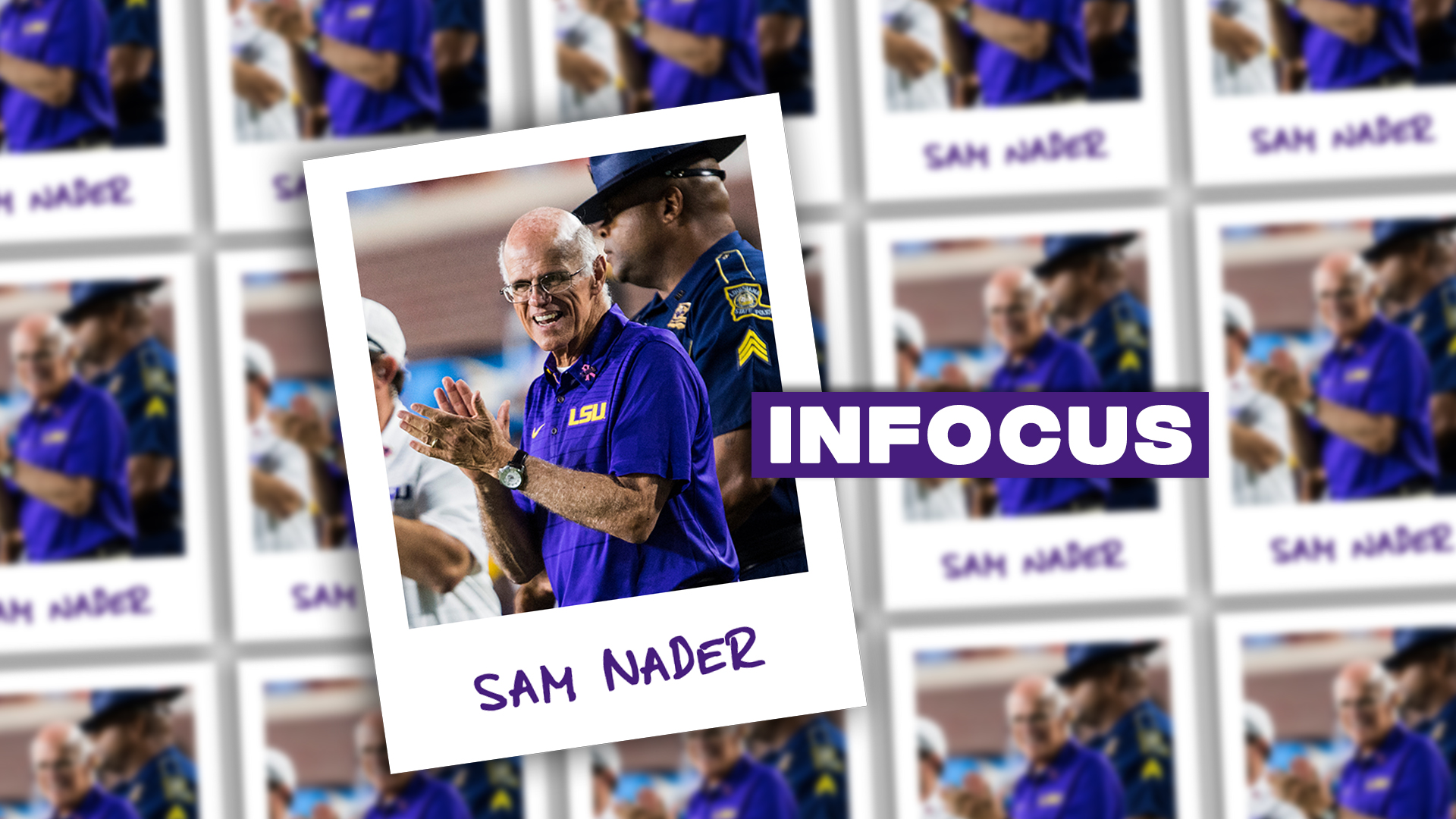 Writing a story about Sam Nader comes with a warning:  he’s not going to talk about himself.

Dr. Sam Nader – Coach Nader to most – comes from humble beginnings and he has remained that way. He’s the son of a traveling minister and is still devout in his Christian faith. When asked about him, you frequently hear words like “kind,” “humble,” “selfless,” or simply “the best.”

Lois Stuckey, the administrative coordinator for LSU Athletics, worked for Coach Nader when he was the director of football operations. “I always tell people that I don’t have any patience because God gave it all to Sam,” she joked.

Despite being known for his kindness and wisdom, Nader is also full of grit. Before his retirement at the conclusion of the 2020 football season, he worked during four expansions of Tiger Stadium, under nine head coaches and six athletic directors.

That’s not typical in this industry, but nothing about Nader is.

Years ago, when the team was practicing outside in subfreezing weather, Coach Nader came to practice shirtless with a “T” painted across his chest. That motivational tactic is just the tip of the iceberg. The night before the LSU-Alabama football game in 2019, Nader addressed the team in their hotel. He presented highlights from years of LSU wins over Alabama and showed them that they were more than able to do it again.

In his 46 seasons with the football program, Coach Nader worked with thousands of student-athletes and impacted countless lives. Andy Stroup, a former football walk-on, is the first to point out that Coach Nader’s impact extends far beyond the football field. Stroup is now the director of Fellowship of Christian Athletes at LSU and in the Baton Rouge area, but he was first introduced to FCA as a junior wide receiver by none other than Sam Nader.

LSU Athletics Director Scott Woodward echoed the same sentiment when Coach Nader retired, saying “he has been a pillar of stability for generations of student-athletes, coaches, and staff members that have come through our football program and leaves behind a singular legacy of service and devotion to our entire institution.”

To me, an attendee of FCA for the last four years, Nader’s service and devotion has been entertaining, to say the least. He was the leader, asking us hard hitting questions from Bible trivia to sports trivia. Answering the question right meant you picked one of the eight packages of snacks or candy that he brought as prizes every week, always mixing in a bag of apples or bunch of bananas for those who didn’t want the chocolate chip cookies or candy bars.

Stroup was always quick to remind us that Coach Nader was the reason he was standing in front of us today, always encouraging the students of FCA to talk to Nader and walk out with more wisdom than we’d walked in with.

In 2019, Nader was inducted into the FCA Hall of Champions. He was congratulated by numerous former players like Tyrann Mathieu, Grant Delpit and Matt Flynn. Former Tiger and now ABC/ESPN broadcaster Booger McFarland said “there is no one person bigger than a university, however, there are those that come awfully close,” in regard to Coach Nader.

LSU Football alum Marcus Spears, also now an ABC/ESPN broadcaster, wrote “I’m so happy for the man that I’ve always said knows all the answers to every question in the world. Thank you for being a great human being.”

“Congratulations to one of the most consistent individuals at LSU and LSU Football… me and my family have nothing but love for you and your family Coach/Dr. Sam Nader!” wrote All-American running back and Super Bowl Champion Kevin Faulk, whom Coach Nader helped recruit to LSU.

“He’s always walked the talk. You do things for others because that’s what we’re supposed to do and that’s what Sam has always done,” Stuckey said. “He’s known among all the players by how he’s treated them as equal. He would treat his walk-ons just like they were scholarship kids.”

He’s one of a kind. As you can imagine, he’s probably not thrilled about being honored on the field this weekend as the Tigers take on Central Michigan – he doesn’t want the attention.

Coach Nader always did his job for others, never for himself, and that selfless, humble legacy is what he leaves behind in the Football Operations Building, in Tiger Stadium, and in everyone that’s had the honor of knowing him.