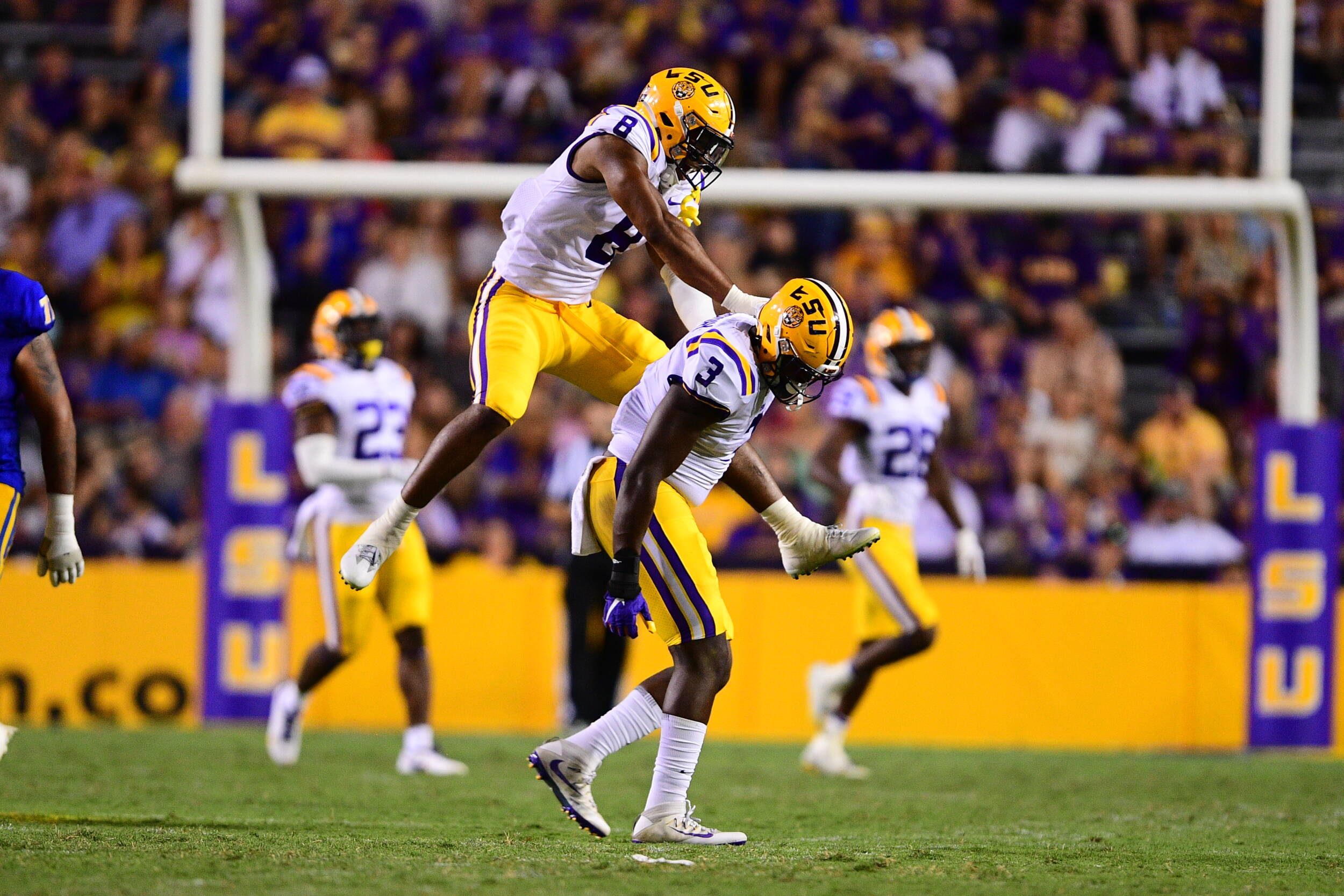 Before Ed Orgeron said a single word about LSU’s 34-7 win over McNeese on Saturday night, he thanked the fans.

The fans that, 651 days removed from the last time Tiger Stadium was at full capacity, allowed it to return as its most authentic self.

From the tailgates, to the Tiger Walk, to a packed student section belting out every word of Callin’ Baton Rouge like it was a song they’d been dreaming of singing together for a long time — because it was.

The fans set the tone, providing a reminder that there is no place like Death Valley on a Saturday night, no matter how many days separates us.

“What a great day,” Orgeron said postgame. “Our fans were fantastic, I want to thank them for being there and supplying the energy for our football team. They were very loud at the beginning of the game.”

It was behind that crowd, and an improved defensive effort, that the Tigers secured their first victory of the 2021-22 season, allowing them to flush some bad taste out of their mouths and press forward.

The defensive front – led by freshman Maason Smith and senior Andre Anthony — found success rushing the passer all night, as LSU’s defense finished with 16 tackles for loss, eight sacks and one turnover forced, something they don’t take lightly, no matter the opponent.

“I thought he rushed the passer well in the first game,” Orgeron said on Smith, who recorded three sacks. “He did again tonight. He dominated his man. He’s a tremendous rusher, especially inside. He’s very athletic for a guy that’s 6-foot-5. He’s a great young player for us.”

“I wish we had this energy last week,” Anthony added, who tallied 2.5 sacks, too. “We knew what we had to do. Now we have to keep the same energy going forward, no matter who we play, and carry it over each week.”

The Tigers forced 12 McNeese punts, which tied the most forced by LSU since the 2002 season.

Offensively, despite more struggles in protection, LSU found some sparks when they needed them. Freshman running back Corey Kiner, who impressed coaches throughout fall camp and preseason scrimmages, scored his first touchdown as a Tiger, rushing for 60 yards on 11 carries. Freshman receiver Jack Bech proved to be a reliable target, tallying four catches for 57 yards.

It’s becoming clear that good things happen when Bech touches the football, and it’s expected that the Tigers are going to make sure that happens more often going forward.

It was a record-setting night for LSU kicker Cade York, who nailed two 50-plus kicks — one from 55 and one from 56 — shattering a new Tiger Stadium record. York’s 57-yarder against Florida in 2020, however, remains the best mark in school history, regardless of the venue.

“It’s pretty freaking sweet,” Johnson said of York. “We get across the 50-yard line and we think we’re in field goal range — and we are.”

His leg acts as a security blanket for an offense that knows they only have to advance the ball so far until they’re in field goal range. In fact, York is now 12-of-14 from 50-plus in his career, and that’s something that Johnson and the LSU offense appreciates when driving down the field.

The only player in LSU history with two, 50-yard FGs in a game… He's done it twice. @LouGrozaAward ｘ @YorkCade pic.twitter.com/Q4HSErgGGd

York is a perfectionist, something that was on full display during postgame interviews, when he was critiquing his record-setting 56-yard field goal to the media, claiming “it was a little bit of a pull, but you can’t complain.” The great ones are never satisfied, and York is certainly great.

It wasn’t a perfect 60 minutes by any means, but Orgeron says he saw some improvements on Saturday night that the team can build on, with plenty of areas that still need improvement. The defensive line looked like the group Coach O saw in fall camp — fast, attacking and skilled at rushing the passer.

“I thought from game one to game two we made a jump in a lot of areas, and now we need to take our next jump next week,” Orgeron said.

While the Tigers claimed victory in their home opener, you couldn’t help but feel that Saturday on LSU’s campus felt bigger than any final score. It felt like a celebration — filled with people that loved their university and their state.

Saturday Night in Death Valley was back — for real this time — ending the only way a celebration in Tiger Stadium can: with a win.

“It felt good to see everyone back in the stadium,” York said. “To hear the crowd like that again — the chants and all that — it was awesome.”