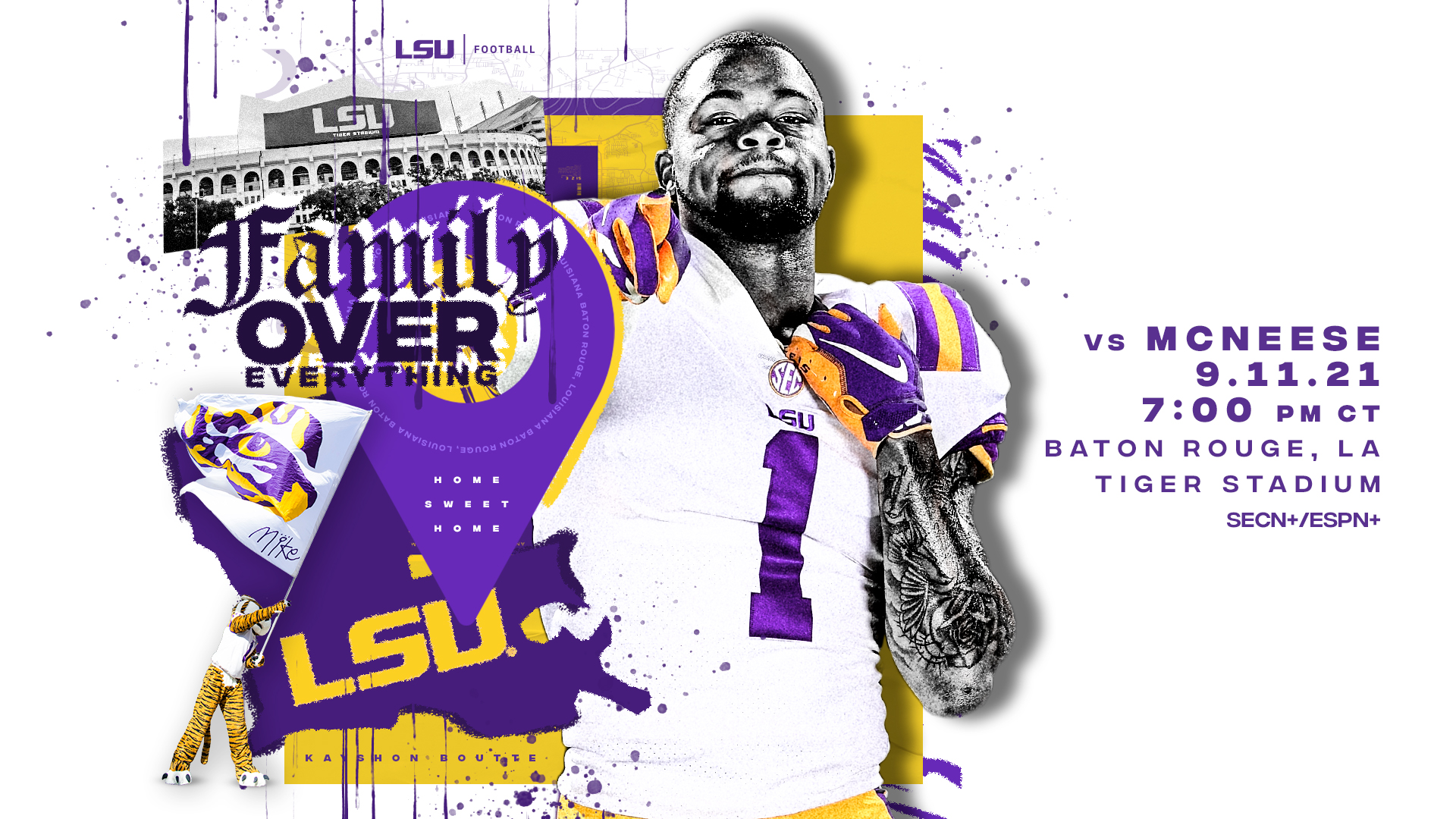 LSU (0-1) looks to bounce back on Saturday night in its home-opener against McNeese State (0-1), marking the first meeting between the two programs since 2015.

Kickoff is set for 7:02 p.m. CT on SEC Network+ and the LSU Sports Radio Network.

It will be Tiger Stadium’s first full capacity crowd in 651 days, dating back to the season finale against Texas A&M on Nov. 30, 2019. For many players and coaches, it will be their first normal Tiger Walk, and their first game in front of a full crowd at home. That’s exciting, especially for someone like LSU sophomore quarterback Max Johnson.

It will also be a family reunion in Death Valley as head coach Ed Orgeron squares off against his son Cody, the Cowboys’ starting quarterback. It will no doubt be a special night for Coach O and family that will be in attendance, but he’s made it clear that once the ball kicks off, that all takes a back seat. It’s LSU vs. McNeese State — that’s the focus.

“Playing against Cody is going to be pretty cool,” Orgeron told the media on Tuesday. “He’s going to be talking some smack, he knows all of our players. He’s excited to play in Death Valley. But once the game starts, it’s going to be competition. We both have to do what we can to win the game.”

“I believe he’s one of the greatest assistant coaches that’s ever come to LSU,” said Orgeron of Wilson. “Great recruiter — I’ve worked with Frank — great coach, and I’m glad he’s coaching my son. I love playing in-state schools, I think it’s good for the state, and we’re glad that McNeese is coming to LSU.”

The Tigers are looking to rebound from a 38-27 road defeat to UCLA in the 2021 opener, but Orgeron knows that must start with an improved effort in all three phases, specifically on the offensive and defensive lines. There were a few silver linings from Saturday’s loss, though, starting with star receiver Kayshon Boutte, who totaled nine catches for 148 yards and three touchdowns. Boutte also tallied an impressive 82 yards after the catch and averaged 9.1 yards per reception.

“We need to get the ball to him earlier,” Orgeron said on Boutte’s performance. “I thought he had a fantastic night. The guy is a dynamite player.”

Rushing for just 49 yards against UCLA, Orgeron emphasized that the run game needs to vastly improve in week two. Freshman running backs Corey Kiner and Armoni Goodwin , who impressed in fall camp and during preseason scrimmages, are both expected to make their debuts at some point in the game on Saturday, along with freshman quarterback Garrett Nussmeier.

On the defensive side of the ball, cornerback Eli Ricks recorded his first interception of the season against the Bruins, and it’s expected that many more are to come as the year progresses. Linebacker Damone Clark led the Tigers with a game-high 14 total tackles. The effort was there, Orgeron says, but players need to be put in better positions to make plays, and that’s an adjustment that’s going to be made ahead of Saturday’s game.

It's why we are who we are.
It's why we do what we do. pic.twitter.com/ToyguTXp1H

“I thought our players had a lot of want-to (against UCLA),” Orgeron said. “There was a lot of mistakes made, but most of the mistakes can be fixed by coaching. I take the responsibility myself.”

For more information, check out LSUsports.net/covid19.

Cardboard cutouts did their part in 2020, but their real life avatars can finally return to their seats in over 24 hours.

The sun will find its home in the Western Sky just minutes after kickoff, and Saturday Night in Death Valley will officially make its long-awaited return in front of a full capacity Tiger Stadium.

“I want to use (the energy),” Orgeron said. “I want us to explode at 7 p.m. CDT, not before. There’s a lot of young guys, and some coaches, that will be in Tiger Stadium for the first time, so it will be wild. It’s going to be a great night. I can’t wait.”

With the significant threat presented by COVID-19 across the state of Louisiana due to the highly transmissible Delta variant, LSU will require all Tiger Stadium guests 12 years of age and older to provide proof of vaccination or a negative COVID-19 PCR test taken within 72 hours prior to entry. The decision comes after consultation with – and support from – Governor John Bel Edwards, LSU President William F. Tate IV, LSU’s Board of Supervisors, Tiger Athletic Foundation, and Director of Athletics Scott Woodward.

In order to expedite entry into Tiger Stadium, guests for LSU’s home football opener against McNeese State on Saturday can get their proof of vaccination or negative COVID-19 PCR test verified from 10 a.m. to 4 p.m. prior to their arrival at the stadium’s gates.

Pre-verification will be offered at 12 sites across campus from 10 a.m. to 4 p.m. ahead of Saturday’s 7 p.m. kickoff. In addition to these 12 sites, mobile teams will be available across campus to verify proof of vaccination or a negative PCR test taken within 72 hours prior to kickoff.

At any of these sites, vaccinated guests can show:

Testing will take place from 2:30 p.m. until 5:30 p.m. before LSU’s 7 p.m. kickoff against McNeese State. Registration will remain open until all spots are filled. Only guests who are registered will be allowed to participate in gameday testing.