Austin Deculus has never forgotten the first lesson he learned from Ed Orgeron. 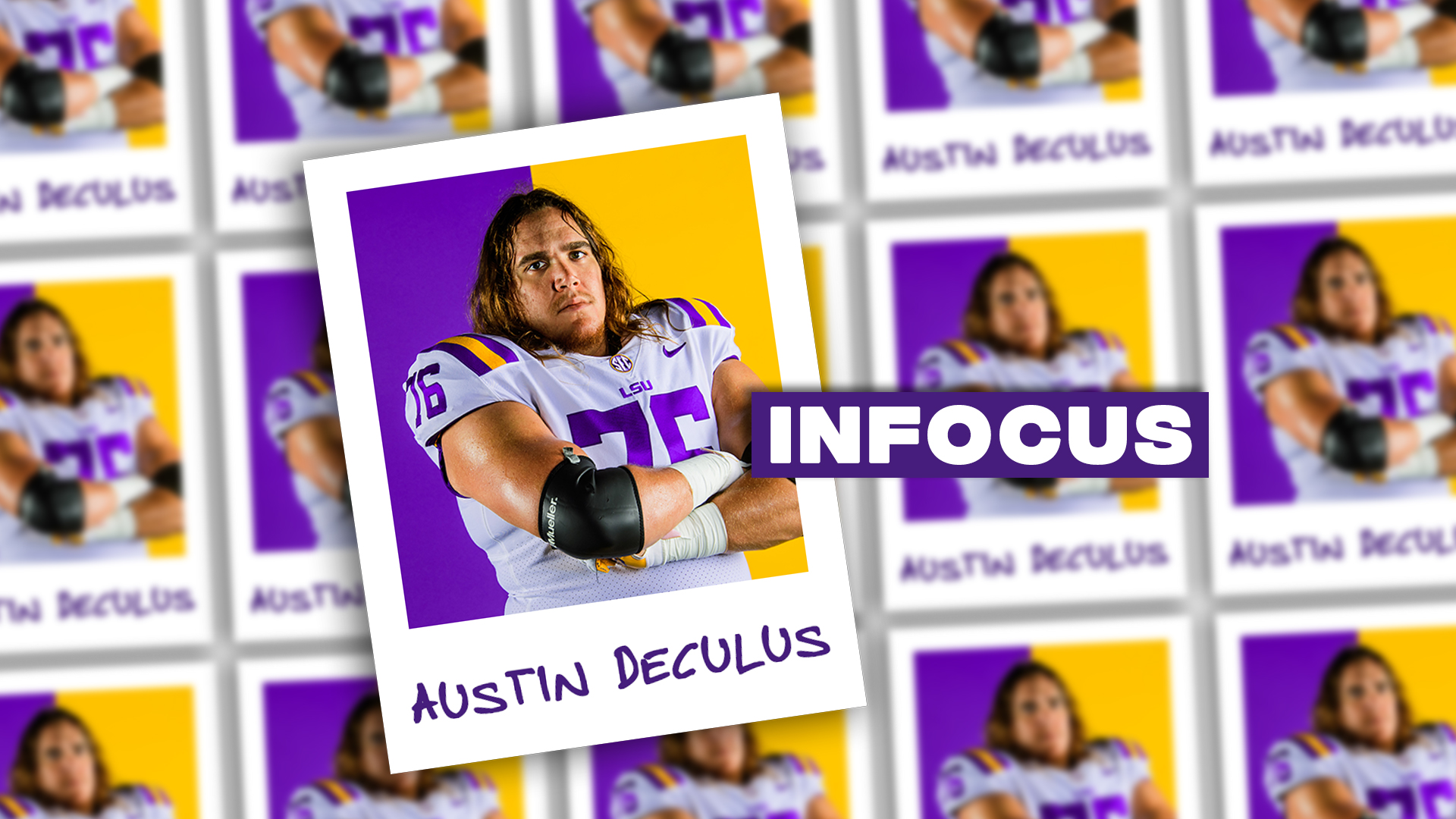 Austin Deculus has never forgotten the first lesson he learned from Ed Orgeron.

When LSU’s head coach arrived at Deculus’ house for an in-home recruiting visit, he was determined to land his top offensive tackle target for the Class of 2017. So when the Deculus family offered Orgeron a bowl of home-cooked bison chili, he ate it all, and asked for more.

Orgeron’s commitment to the cause left an indelible impression on Deculus, who quickly committed to the Tigers and promised to follow the example of his new head coach: make every bite count, and never leave while there’s still food on the table.

Deculus remains committed to that pledge, as he returns to LSU for the finale of a five-course meal in 2021. In his four previous seasons, Deculus appeared in 49 games, feasting on opposing defensive linemen and savoring success at the highest level. He’s been embedded as the Tigers’ starting right tackle since 2018 and played a key role in the 2019 national championship season.

But after a 5-5 campaign in 2020, Deculus couldn’t leave LSU on a sour note. Despite a collegiate career most would consider complete – highlighted by that 2019 title and the Joe Moore Award as the nation’s top offensive line that season – Deculus bypassed a bite at the NFL for one more taste of Tiger Stadium.

“Just being able to come back and bounce back from last season, and come back and get another championship for this program, that’s the main reason I came back,” Deculus says.

DECULUS KNOWS THE RECIPE for a bounce back season. He was there in 2018, starting 13 times as a sophomore, as the Tigers’ offensive line struggled to find consistency. All the ingredients were there for a great attack – Joe Burrow at quarterback, Clyde Edwards-Helaire in the backfield, and Justin Jefferson, Ja’Marr Chase, and Terrace Marshall all catching passes. And at times, they looked unstoppable, knocking off No. 2 Georgia at home and grinding out a gritty win over Auburn on the road.

But LSU’s front five was inexperienced, and that bred inconsistency. They finished 106th nationally in sacks allowed (2.69 per game), unable to always give Burrow the time he needed to settle in the pocket and pick out his targets. It was a unit that needed time to gel, mistakes to learn from, and a year of seasoning before they were ready to eat. The Tigers would finish 10-3 and champions of the Fiesta Bowl, but they knew they had left something on the table.

“It helped us find our identity as a team,” Deculus says. “Coach O told us we probably could have made the playoffs, but in the games we lost there were just two or three plays that defined our season. He emphasized we weren’t going to leave anything to chance (in 2019), that we were not going to let a few bad plays come back and bite us.”

By 2019, Deculus and the LSU front emerged as the best unit in the country, keeping Burrow so clean on his way to the Heisman Trophy that he began his famous speech from the award ceremony by thanking his line. And when the Joe Moore Award committee brought by the trophy he and his teammates had earned, Deculus – a 330-pounder who can squat nearly double his weight – couldn’t believe just how big it was.

“It’s the only trophy in college football that there’s only one copy of,” Deculus says. “There’s no copies, no replicas. It’s an 800-pound trophy they have to get a whole U-Haul truck and take it all over the country. Right before us, it was at Oklahoma, so they had to take it all the way from Oklahoma, haul it over here, put it on two-by-fours to roll it in.”

As hard as it is to get the trophy – the work required to earn it and the weight it requires to move – it was harder for Deculus to watch it leave. After the Tigers’ 5-5 2020 season, the trophy left Baton Rouge for another program. The line wasn’t there to watch it leave, and like Deculus, most could have decided to follow the trophy out the door and take the next step in their careers.

Instead, they started asking each other a question: What are you going to do to get it back?

“They took the Joe Moore Award away from us to the other place that won it,” says Deculus. “That’s our main goal – to bring it back where it belongs.”

THAT’S ANOTHER RECIPE DECULUS knows by heart, too. He remembers how the disappointments of 2018 set the stage for the dominance of 2019. When it came time to decide this offseason whether to head for the NFL or return for a fifth season – like many players across the country, Deculus was granted an additional year of eligibility due to the COVID-19 pandemic’s effects on college football in 2020 – Deculus thought about the sweet taste of redemption and opted for seconds.

“With the offensive line group, we really just came together,” Deculus says.  “You look back, you look at 2018, you look at the season that the offensive line had, people were saying similar things to us this past 2020 season. I kind of like told those guys, look what happened whenever we all came back – 2019 season, Joe Moore Award, all that. I just sprinkled that insight on them, and we just took that on the ground running.”

Deculus helped persuade teammates like Ed Ingram, Liam Shanahan, and Chasen Hines to return for the 2021 season. After the pandemic turned everything on its head last season, things felt more normal this offseason. Spending time in quarantine and with limited contact with teammates has a way of shifting perspective. Deculus even found himself smiling a time or two while running stadiums this offseason. He wondered if he’d lost his mind, but realized instead he’d found his purpose.

“Just being able to just be around each other more, with the stadium runs, even though they had a couple of us breathing a little extra heavy, being able to have everybody up there, seeing everybody’s working toward that common goal, it makes the overall group become closer,” he says.

Adversity has forged a tighter unit in the trenches, and so has competition. Battling against a deeper, more talented defensive line all spring and summer has made the LSU offensive line sharper for the fall. This was the fifth camp for Deculus in purple and gold, and he’s never seen a team so close and so aligned with the One Team, One Heartbeat mantra.

“The overall camaraderie and the energy is just there,” he says. “You can smell it. You can taste it.”

It’s a taste Deculus can’t get enough of. He’ll get the chance to be the first Tiger to play 60 career games this season, and if you offered 60 more, he might just accept. It’s what Orgeron taught him in recruiting, one bowl at a time. The table is set, and Deculus is still hungry.