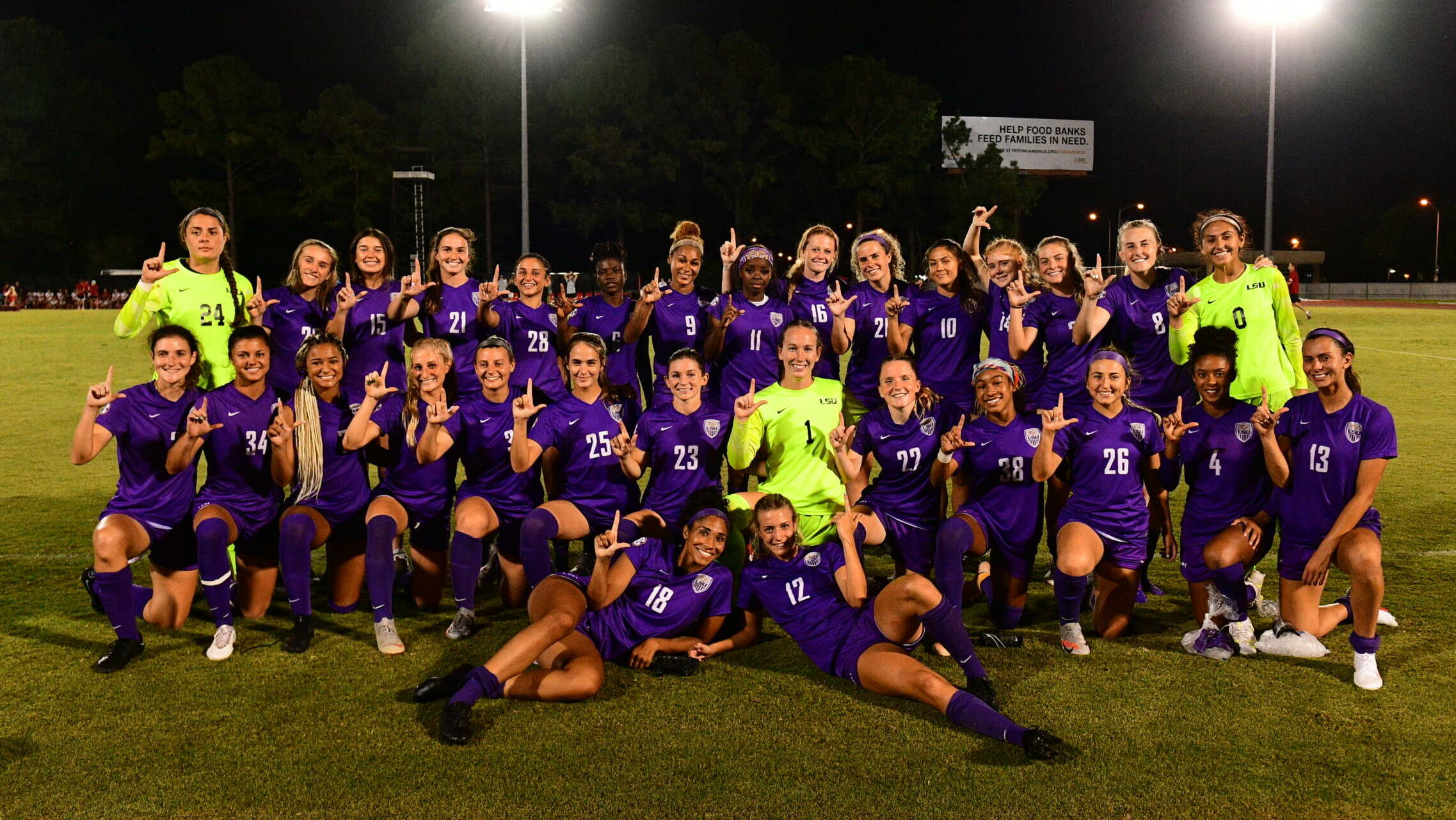 Lafayette, La. – The No. 7 LSU Soccer Team (7-0-0) made program history on Thursday night as they defeated the UL-Lafayette Ragin’ Cajuns (2-5-0) on Thursday night at the Ragin’ Cajuns Soccer Facility. The Tigers set the program record for most consecutive wins as they won their tenth straight match Thursday night; the streak dates back to the 2021 spring season. The previous school record for most wins in a row, nine, came in 2002. Forward Molly Thompson led the night as she recorded a hat trick with goals in the 16th, 21st, and 51st minutes. Forward Tinaya Alexander and midfielder Meghan Johnson each scored a goal in the 41st and 81st minute respectively.

“Huge amounts of momentum for our program right now as we’ve started the season off with seven wins in a row,” head coach Sian Hudson said after the match. “Really proud of everything we have accomplished since we set foot on campus. The sheer amount of effort our girls are putting in and the way they play for each other is just a credit to them.”

The Tigers opened the scoring on the night in the 16th minute as midfielder Rammie Noel sent a cross into the box from the left flank that saw Thompson leap and head the ball into the back of the net from eight yards out. The goal was the second of the season for Thompson, and Noel’s team-high third assist of the year.

Thompson doubled her goal tally only five minutes later as she latched on the end of a long ball and drove into the edge of the box, where she cut inside on her right foot and ripped a shot into the right corner from 17 yards out to give LSU a 2-0 lead in the match and give Thompson her third goal of the season.

LSU grabbed the third goal of the match in the 41st minute after Alexander carried the ball from midfield, dashed by a defender, and burst into the box and placed her finish into the top left corner. The goal takes Alexander’s goal tally to six on the season, a team-high on a team that’s flourishing with goals.

Goalkeeper Mollee Swift commanded the box and kept the ball out of her goal in 45 minutes of action, registering three saves in the 7th, 19th, and 44th minutes. Goalkeeper Jade Odom made her LSU debut in the second half, taking the spot between the posts for the final 45 minutes of the match.

In the 51st minute, Alexander played a through ball into the box to Thompson, who shot it first time and slotted it past the Ragin’ Cajun goalkeeper into the bottom left corner to extend LSU’s lead to 4-0 and secure Thompson’s hat trick. The hat trick is the first in Thompson’s career, and the 20th hat trick in school history. With the assist, Alexander’s career tally moves to 19 and is tied for fifth on the all-time assist list for LSU.

LSU capped off the night with one final goal in the 81st minute. Defender Grace Haggerty swung in a corner that found midfielder Tiana Caffey, who headed it down and found Johnson. Johnson lifted the ball into the top right corner to secure her first goal of the season and fourth of her collegiate career. Caffey’s assist was the first of the year and fourth of her career while Haggerty claimed the first assist of her career on the play.

81' | Meghan Johnson gets on the scoresheet for the first time this season with a goal in the 81st minute! Assists go to @grace_hag and @t_iana_

Odom marked her first appearance in Purple & Gold by keeping a clean sheet in the second half, registering two saves in the 60th and 64th minutes. The clean sheet means that the Tigers have now kept a clean sheet in four out of seven games to start the season.

LSU outshot UL-Lafeyette by a margin of 20-10, with the Tigers registering 12 shots on target compared to the Ragin Cajuns’ five.

LSU will open SEC play at home as they take on the Mississippi State Bulldogs at 7 p.m. CT on Friday, September 17th.