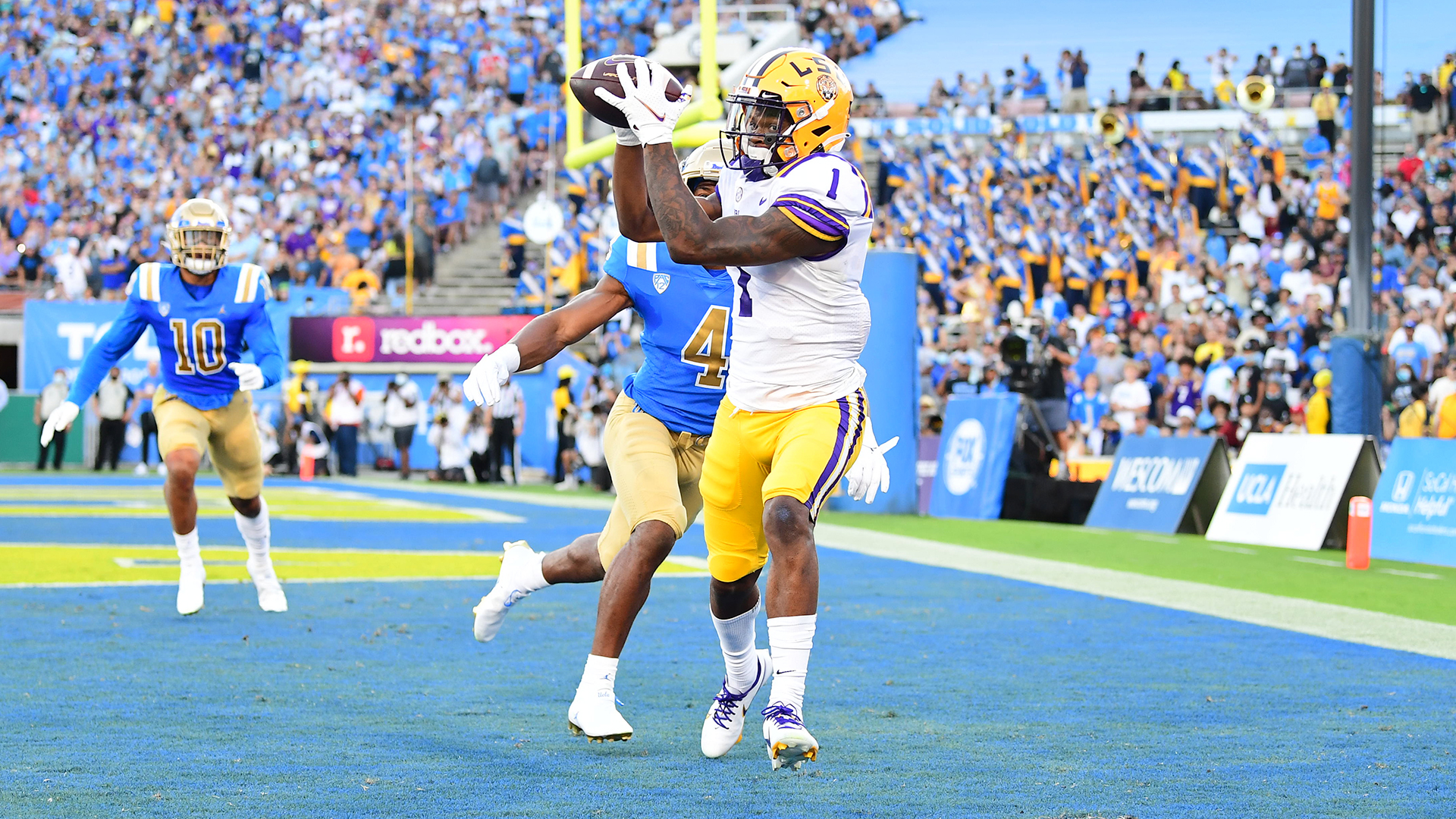 PASADENA, Calif. — Quarterback Max Johnson connected with wide receiver Kayshon Boutte for three touchdowns, but it wasn’t enough for No. 16-ranked LSU on Saturday at the Rose Bowl. UCLA won the first meeting between the teams, 38-27.

UCLA senior quarterback Dorian Thompson-Robinson threw for three touchdowns, as the Bruins pulled away from LSU with a pair of fourth-quarter touchdowns.

UCLA (2-0) then used a pair of eight-play drives that spanned 73 and 81 yards in the fourth quarter to earn a victory in the first meeting between the programs on the gridiron.

Johnson, who started for the third time in his LSU career, completed 26-of-46 passes for 330 yards and three touchdowns. He was intercepted once and sacked twice.

LSU struggled to find momentum in its running game, finishing with 49 net yards on 25 carries.

Bruins’ quarterback Thompson-Robinson was 9-of-16 passing for 260 yards with touchdown passes of 75, 14 and 45 yards. Tight end Greg Dulcich caught three passes for 117 yards including a 75-yard touchdown pass. UCLA’s Zach Charbonnet had 117 rushing yards on 11 carries with a touchdown.

The Tigers return to action for the home opener on Saturday, Sept. 11, when McNeese visits Tiger Stadium. Kickoff is set for 7 p.m. CT, with streaming on SEC Network+ and ESPN+. Ticket and parking information, COVID protocols and more is available at LSUsports.net/gameday.

The Bruins moved to the LSU 34-yard line on the game’s opening possession, but the Tigers stopped the drive when defensive end Ali Gaye recorded a third-down sack of UCLA quarterback Dorian Thompson-Robinson at the visitors’ 46-yard line.

The LSU defense was dominant throughout a scoreless first quarter, allowing just two first downs on three UCLA possessions that totaled only 51 yards.

LSU scored its first touchdown of the 2021 season on its first possession of the second quarter, as Johnson connected with Boutte on a 3-yard scoring pass, giving the Tigers a 7-0 lead with 12:34 remaining before halftime.

The eight-play, 63-yard drive was highlighted by a 16-yard completion from Johnson to true freshman wide receiver Brian Thomas Jr. at the UCLA 33-yard line. A facemask penalty was assessed on the play, giving the Tigers a first down at the Bruins’ 18.

UCLA retaliated immediately, tying the game on its next play from scrimmage as Thompson-Robinson hit Dulcich on a 75-yard catch-and-run to the end zone.

After the UCLA defense forced a three-and-out, the Bruins promptly drove 71 yards on six plays to take a 14-7 lead at the 9:49 mark of second period. The march was culminated by a 12-yard TD dash by Charbonnet, who also had a 20-yard run and a 35-yard reception during the drive.

LSU forced the first turnover of the game at the 4:44 mark of the second period when cornerback Eli Ricks intercepted Thompson-Robinson at the UCLA 33-yard line. The pick was the fifth career interception for Ricks, a sophomore playing in his home state of California.

The Tigers capitalized on the opportunity, narrowing the gap to 14-10 on a 26-yard Cade York field goal with 3:53 left before intermission.

Neither squad was able to generate a first down for the remainder of the half, and the Bruins took the four-point lead to the locker room.

Johnson was 14-27 through the air in the first half for 138 yards and one score. The Tigers recorded four first-half sacks of Thompson-Robinson, who threw for 159 yards, one touchdown and one interception.

The UCLA defense recorded its first turnover on the opening possession of the second half when Bruins linebacker Caleb Johnson intercepted a Johnson pass and returned the football to the LSU 17-yard line.

The Tigers roared right back by cruising 75 yards in four plays, with the march ending in a 44-yard scoring strike from Johnson to Boutte, reducing the deficit to 21-17 at the 8:56 mark of the period.

UCLA responded with a six-play, 50-yard drive that culminated in a 43-yard field goal by Nicholas Barr-Mira, giving the Bruins a 24-17 advantage at the 6:38 mark of the third quarter.

LSU advanced to within four points again when it drove 60 yards in 11 plays, and York nailed a 33-yard field goal with just over a minute remaining in the period.

Charbonnet’s 43-yard run to the LSU 16 sparked UCLA’s next scoring drive, which ended on a 1-yard TD burst by running back Brittain Brown. Thompson-Robinson’s 19-yard pass to Dulcich on third-and-14 at the LSU 20 set up Brown’s touchdown, which came with 12:28 left in the game.

A 45-yard catch-and-run by Kyle Phillips pushed UCLA’s advantage to 38-20 with 6:31 remaining in the contest.

LSU quickly responded with a similar 45-yard score of its own, as Boutte caught a pass from Johnson, avoided a tackler and tip-toed the sideline for his third score of the game.