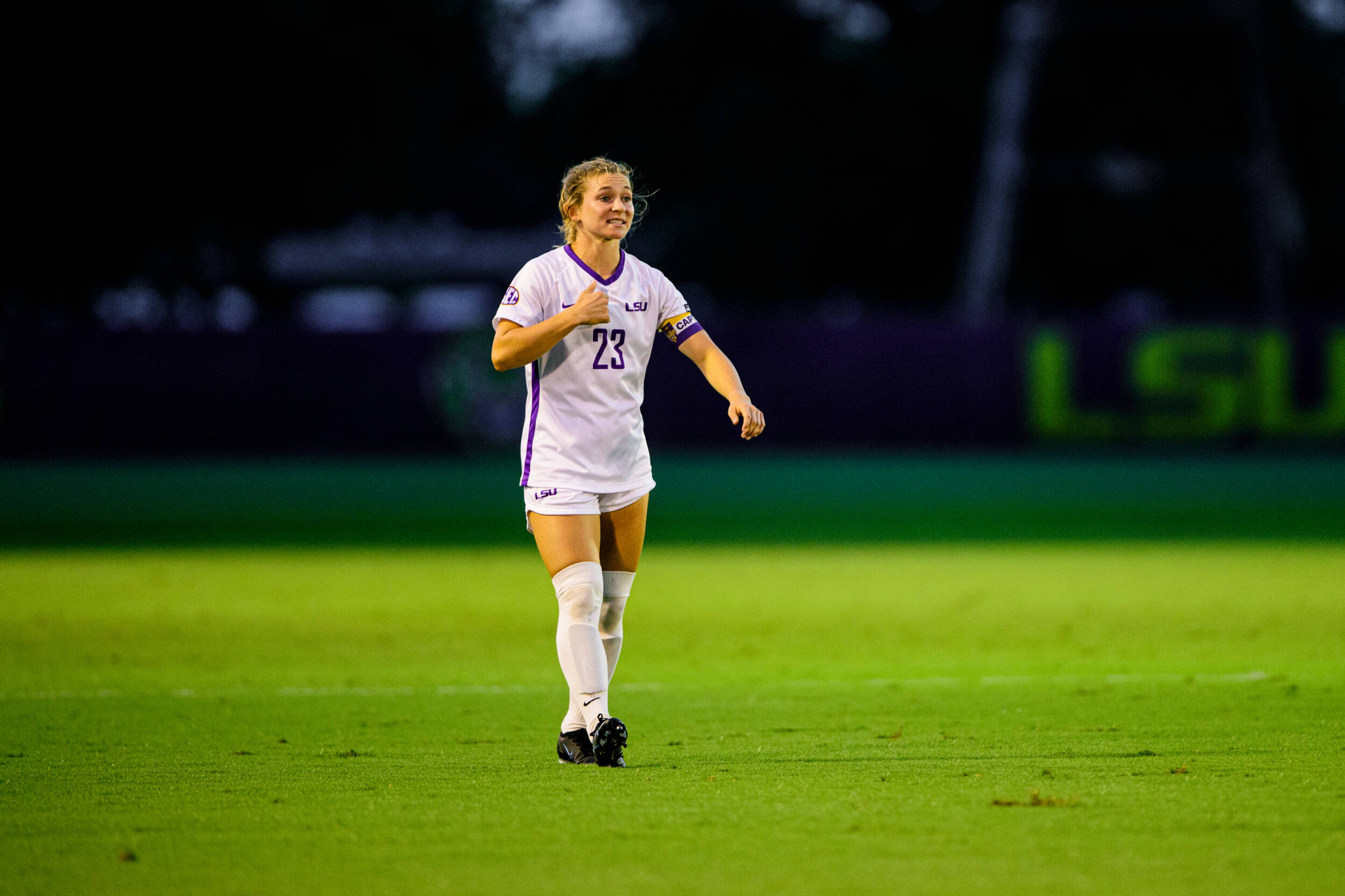 Tampa, Fla. – Midfielder Maddie Moreau played the role of hero as she scored the winning goal with 31 seconds left to secure a 2-1 win for the LSU Soccer team (3-0-0) over No. 15 South Florida (2-1-0) on Thursday evening at Corbett Stadium. The Tigers scored their first goal of the game in the 12th minute with a tidy finish from midfielder Athena Kuehn before USF scored their only goal in the 66th minute from the penalty spot thanks to Sydney Nasello.

The win marks the fourth time in program history that LSU has secured a road win against a Top 25 opponent, and the first since the 2012 season.

“Thrilled to come to a top ranked opponent and get a win on the road,” head coach Sian Hudson said. “USF is a quality team, but the grit and collective effort we showed today on the defensive side of the ball was immense.”

The Tigers opened the game on the offensive foot, pressuring the Bulls all over the pitch. The breakthrough came in the 12th minute when forward Rammie Noel carried the ball down the wing and into the box and sent a ground cross across the face of goal. Kuehn found herself on the receiving end, where she took a touch and slotted the ball into the back of the net. The goal is the first of her LSU career, and it’s the first assist of the season for Noel.

LSU leads by one as we await the weather to pass.#GeauxTigers pic.twitter.com/scIbwDRKqI

“Athena (Kuehn) scored a great goal early on with a composed finish to put us ahead,” Hudson said. “She was a huge presence for us all over the field today. We had a few other great moments in attack that we didn’t capitalize on and were disappointed to come in at half time only up by one.”

LSU pushed for a second goal the rest of the half and tested USF goalkeeper Sydney Martinez on numerous occasions. In the 23rd minute, forward Tinaya Alexander got by her defender in the box and ripped a shot from 13 yards out that Martinez parried away at full stretch. Only three minutes later, Martinez denied Kuehn a second goal of the game with a strong save in a one-on-one. She would go on to pick up two more saves in the 26th and 28th minute to keep the score line 1-0.

LSU goalkeeper Mollee Swift picked up her only save of the first half in the 43rd minute, stopping a ground shot from ten yards out by Nasello.

The Tigers and Bulls only played six minutes of the second half before a thunderstorm in the area caused an hour-long weather delay. Following the delay, USF came out and pressed the Tigers, requiring Swift to get her second save of the game in the 59th minute by denying Sabrina Wagner’s effort on goal.

In the 66th minute, Kendall Lincoln latched on a through ball at the edge of the box and cut inside on defender Reese Moffatt, who couldn’t get out of the way in time and clipped Lincoln inside the box as the Bulls were awarded a penalty kick. Nasello stepped up and placed her penalty in the top-right corner to beat Swift and tie the match at 1-1.

Swift held firm in the following minutes and came up big for the Tigers with two acrobatic saves. USF’s Emilee Lajmiri dribbled the ball to the edge of the box in the 70th minute and sent a powerful effort on goal that was denied by a full-stretched Swift. Seconds later following the USF corner, Lucy Roberts sent in a headed effort from six yards out that was pushed over the top of the crossbar by Swift. The save was Swift’s fourth and final of the game.

72' | @MolleeSwift keeps us even with two consecutive leaping saves!

“USF put us under a huge amount of pressure after the lightning delay and Swift made two huge saves to keep us tied,” Hudson said.

Both teams chased a go-ahead goal with neither able to register quality chances in the final 20 minutes. The Tigers got their opportunity in the final minute as Noel dispossessed a USF defender and sent in a ground cross into the box. Midfielder Wasila Diwura-Soale’s dummy run opened space for Moreau, who took a touch into the newly founded space and lifted the ball past Martinez and into the back of the net with 31 seconds remaining in the match.

Maddie Moreau scores the gamewinner with 30 seconds left and Rammie Noel picks up her second assist of the match!!!!!#GeauxTigers pic.twitter.com/vWrqWxnRqD

The goal is the second of Moreau’s career, and first since the 2019 season. For Noel, it was her second assist of the game and first multi-assist game in her collegiate career.

Statistically, the match was a very even contest, with both teams registering 11 shots and the Tigers had six on target compared to the Bulls’ five. Both goalkeepers finished with four saves, and USF edged LSU in corners by a margin of 6-4.

With the win, the Tigers move to 8-0-1 under Coach Hudson when scoring two or more goals in a match.

“So proud of the belief in the team right now to continue fighting until the last minute and so happy for Maddie (Moreau) to grab the winner late on and secure a huge victory for us,” Hudson said. “Rammie (Noel) was also superb today on the pitch, doing so many things well and picking up two assists. We’ll take the confidence from today into another big opponent on Sunday.”

Up Next
LSU will conclude the road weekend in Orlando as they take on the No. 19 UCF Golden Knights at noon CT on Sunday, August 29.