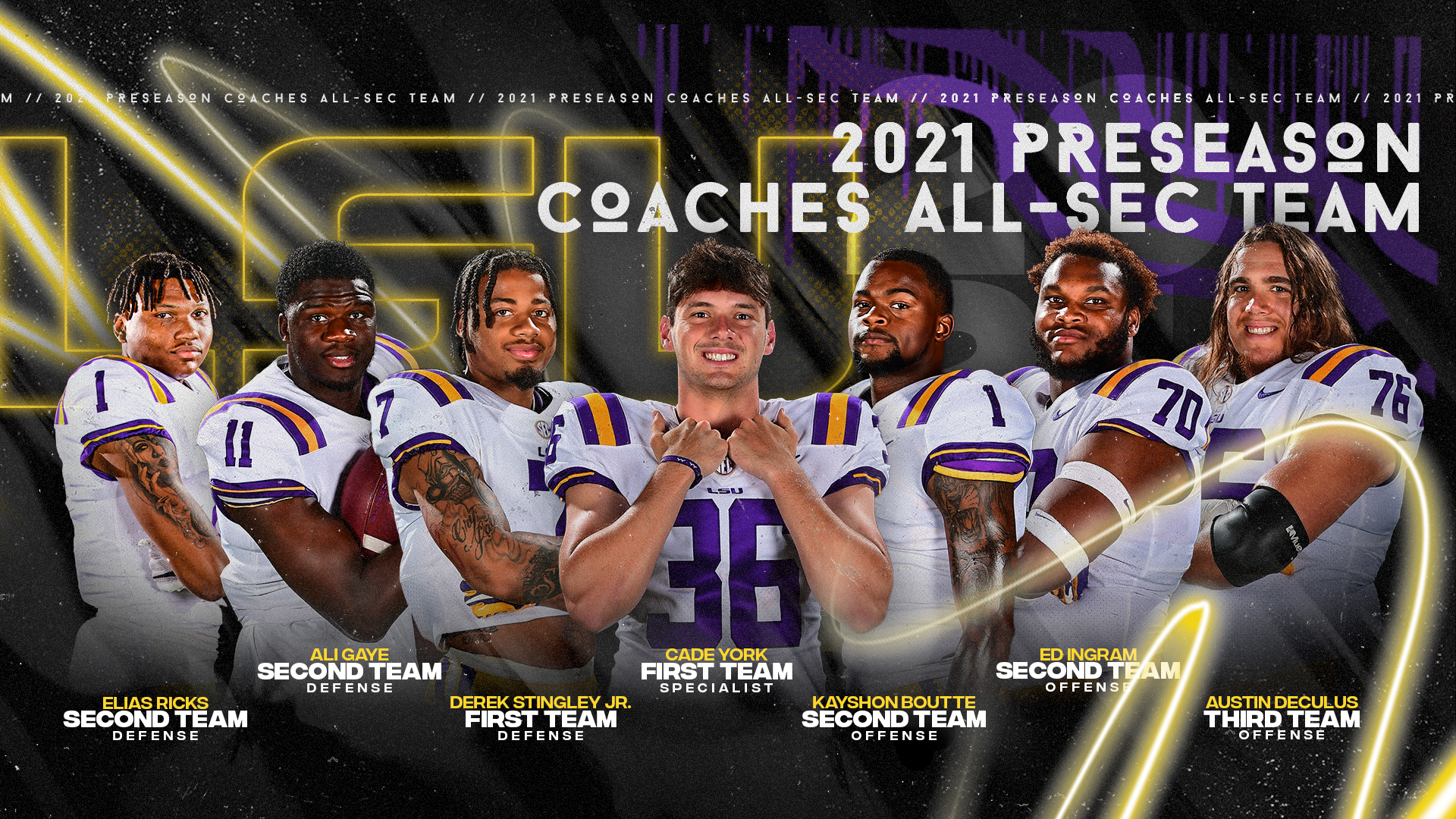 Stingley, a Baton Rouge native who prepped at the Dunham School, goes into the 2021 season looking to join Tommy Casanova (1969-71) as the only three-time first team All-Americans in LSU history.

Stingley, who started all 15 games as a true freshman during LSU’s 2019 national championship season, earned consensus All-America honors that year followed by first team All-America recognition from the American Football Coaches Association (AFCA) in 2020. Stingley was also voted as the SEC Newcomer of the Year in 2019 after leading the league in interceptions with six, including two in the SEC Championship Game win over Georgia.

In two years with the Tigers, Stingley has recorded 65 tackles, six interceptions and 26 pass breakups. He has also recovered two fumbles and forced another.

York, a junior from McKinney, Texas, is on the 2021 Watch List for the Lou Groza Award, given annually to the nation’s most outstanding placekicker.

He kicked his way into the LSU record books last year when he delivered a 57-yard game-winning field goal with 23 seconds left in the 37-34 victory over sixth-ranked Florida in Gainesville.

York earned second team All-America honors last year from the Associated Press and the Football Writers Association of America after converting 18-of-21 field goals during the COVID-shortened season. In two years at LSU, York ranks No. 5 in LSU history in career field goals (39) and he’s the school-record holder for most 50-yard field goals in a career (10) and a season (six in 2020).

Boutte, a native of New Iberia, La., capped his rookie season in 2020 with three straight 100-yard receiving games – including an SEC single-game record 308 yards versus Ole Miss – and he went on to earn Freshman All-America and Freshman All-SEC honors.

Over LSU’s final three games in 2020, Boutte combined to catch 27 passes for 527 yards and four TDs, including three in the Tigers’ win over Ole Miss. He also scored on a 33-yard reception in LSU’s win at No. 6 Florida.

In 10 games in 2020, Boutte caught 45 passes for 735 yards and five touchdowns. He ranked among the league leaders in both receptions and receiving yards. He is a candidate this season for the Maxwell Award, given annually to the nation’s best college football player.

Ingram, a product of DeSoto, Texas, is a three-year starter on the offensive line for the Tigers, and he is regarded as one of the top linemen in college football.

Ingram, who earned an LSU bachelor’s degree in sport administration in May, has played in 34 games during his career, starting 24 times and distinguishing himself with tremendous technique, power and knowledge of the game.

Gaye was also credited in 2020 with seven passes defended, an interception and a forced fumble. He recorded a season-high six tackles and the interception in the Tigers’ season finale win over Ole Miss.

Ricks, a Rancho Cucamonga, Calif., native, made an immediate impact during his rookie season a year ago as he led the Tigers and ranked second in the SEC in interceptions with four. Ricks returned two of his interceptions for touchdowns – the first in a win over South Carolina and the other coming in the upset of sixth-ranked Florida.

Deculus, who hails from Mamou, La., is a 2020 LSU graduate in sport administration and a member of the 2020 SEC Academic Honor Roll who is pursuing a master’s degree in liberal arts.

He enters his fourth season as a starting offensive tackle for the Tigers, and he has appeared 49 career games (34 starts). A powerful run blocker who also excels in pass protection, Deculus is seeking to become in 2021 the first player in LSU football history to appear in 60 career games.