Together Again. Just like in this picture from the 2017 Solheim Cup, former LSU golfers Madelene Sagstrom (L-Europe) and Austin Ernst (USA) will represent their teams in the 2021 Solheim Cup, Sept. 4-6. 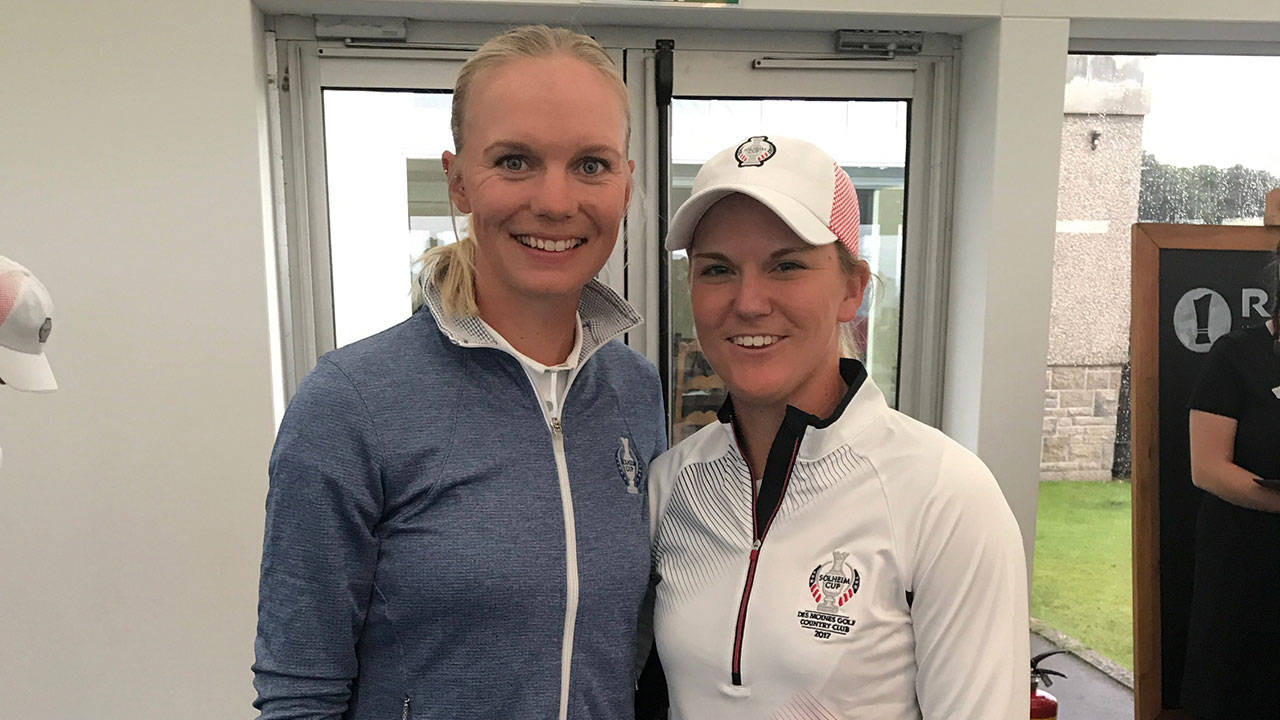 BATON ROUGE – It is going to be a twice as Solheim nice experience for former LSU golfers Austin Ernst and Madelene Sagstrom.

Early Monday morning, European captain Catriona Matthew made her six captain’s picks for the 2021 Solheim Cup, which will be held in Toledo, Sept. 4-6, and made Sweden’s Sagstrom a member of her team.

Sagstrom is one day removed from her best finish in a major, playing iconic Carnoustie Golf Links in 11-under par, finishing in a tie for second in the AIG Women’s Open.

Both will be making their second appearance in the Solheim Cup as they both played in the 2017 event in Des Moines, Iowa.

Ironically, it was Matthew that Sagstrom played with in the first two rounds of the AIG Women’s Open.

Sagstrom’s $409K second prize put her less than $3K from $2 million in LPGA Tournaments in 101 starts. She was 1-2 in her 2017 Solheim appearance, winning her singles match and losing in two fourball matches. She got her first LPGA win in Jan. 2020.

Ernst is already into the top 85 in career earnings on the LPGA Tour with $4.56 milliion in earnings in 212 starts. She is the all-time money winner among former LSU players and has three career wins, including one this year, and 29 career top 10s.

Sagstrom played at LSU from 2012-15 and in 2015 was a finalist for the ANNIKA award, a first-team All-American and SEC Player of the Year. She is one of just four LSU women’s golfers to be named first-team All-SEC on three occasions with a four-year stroke average of 72.95.

Ernst, who won the 2011 NCAA National Championship and helped the Tigers to third place team finishes in both 2011 and 2012, was 2-2 in the 2017 Solheim Cup with a win in both foursomes and fourball. Ernst also while at LSU was selected to the U.S. team for the Walker Cup against Great Britain and Ireland.

No sleep? No problem for @msagstrom!