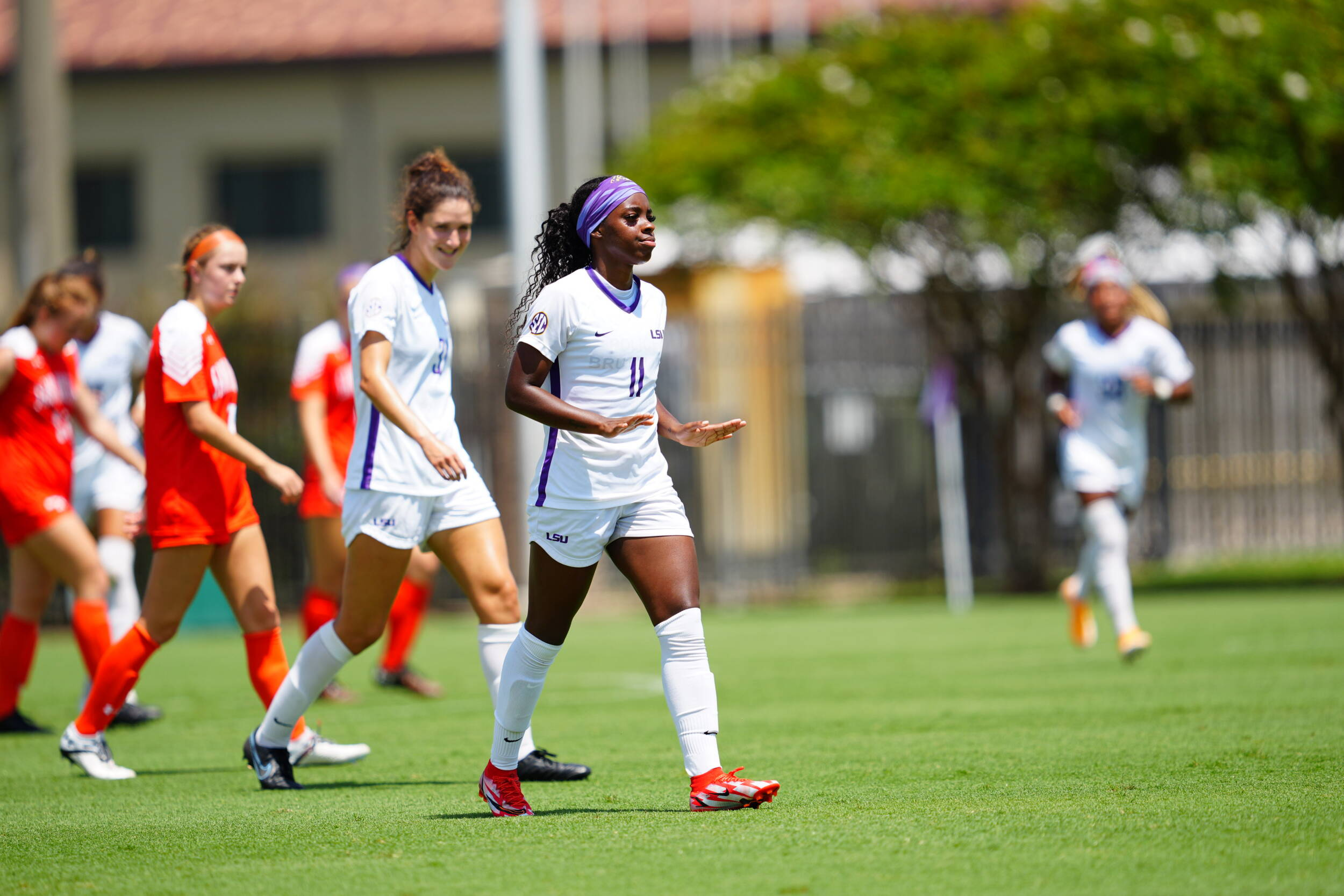 Baton Rouge, La. – Forward Tinaya Alexander scored a career-high four goals in one match with goals in the 20th, 24th, 31st, and 89th minutes as the LSU Soccer team blanked the Sam Houston State Bearkats by a score of 8-0 on Sunday afternoon at the LSU Soccer Stadium. Forward Alesia Garcia opened her account for LSU and scored a hat trick with goals in the 50th, 51st, and 87th minutes. The other goal came from defender Grace Haggerty with a header in the 79th minute. The eight goals scored by LSU in the contest are the most scored in a single game since 2010.

“I thought the performance from start to finish had a lot of energy,” head coach Sian Hudson said. “We were able to use that energy particularly well today to attack. Our front two of Tinaya (Alexander) and Alesia (Garcia) both had a hat trick, which is great to see their ability to link up with each other continuing to grow. It was a good day from us from top to bottom and we’ll look to continue a good start to our season.”

The first goal of the match came in the 20th minute. Defender Maya Gordon’s long ball found Alexander, who turned her defender and broke into space for a one-on-one with the goalkeeper that ended with the ball being slotted into the bottom right corner to open her account for the season. The assist from Gordon was the first of her collegiate career.

The second goal came only four minutes later in the 24th minute after midfielder Wasila Diwura-Soale’s ball in the box was deflected by Bearkat goalkeeper Abby DeLozier into the path of Alexander, who tucked the ball home from eight yards out into an open goal. For Diwura-Soale, it was her first assist of the season and the fifth of her LSU career.

Alexander completed the hat trick in the 31st minute in superb style, taking the ball from midfield to the edge of the box, where she cut inside on her right foot and curled a shot from 20 yards out into the top-right corner. The hat trick was a career-first for Alexander, with the third goal being the 15th of her LSU career and gave LSU a 3-0 lead at half time.

The Tigers picked up right where they left off in the second half by only needing five minutes to get the fourth goal. Garcia found herself on the end of a cross into the box, where her initial headed effort was denied before she followed up by lifting the ball into the back of the net from six yards out to score her first goal for LSU and make it 4-0 on the afternoon.

Garcia only needed 76 seconds to double her tally and make it 5-0. Alexander carried the ball into the box and beat the defender she took on before sending a ground cross to Garcia, who roofed it into the top of the net. For Alexander, her first assist of the season took her career total to 17, which moved her up to eighth on the all-time LSU assist table.

The sixth goal of the game came in the 79th minute. Garcia found herself on the end of a swinging corner and controlled the ball before lightly crossing it into the middle of the box, where Haggerty pounced and headed it into the back of the goal. The goal was two firsts, with Haggerty picking up her first collegiate goal and Garcia getting her first assist as a Tiger.

In the 87th minute, midfielder Neveah Johnson sent a through ball into the final third to Garcia, who rounded the goalkeeper and beat the defender in front of goal to finish her hat trick. The hat trick is the second of her collegiate career and takes her point total to seven after only two games.

The eighth and final goal of the match came in the 89th minute when midfielder Athena Kuehn dribbled into the box and laid the ball off to Alexander, who cut onto her right side to pass her defender and tuck the ball into the bottom-left corner. Alexander’s performance marks the fourth time in program history a player has scored four or more goals in a single game; Jackie Cooper (1996) and Mandy Heintz (2002) both did it twice while Stacy Bishop holds the LSU record of goals in one game with five in 2003. With the assist, Kuehn opens her account of points for LSU with one.

Goalkeepers Mollee Swift and Bella Zanotelli commanded the posts strongly, with Swift starting the first 45 minutes and Zanotelli taking over at the start of the second half. The two keepers structured their backlines and limited the Bearkats to only one shot on target, which was comfortably saved by Zanotelli in the 83rd minute, on their way to a combined clean sheet.

LSU comfortably won the possession battle by a margin of 61% to Sam Houston State’s 39%. 23 different Tigers took the field, including a debut in Purple & Gold for midfielder Brenna McPartlan, who played 32 minutes of action as a substitute.

Up Next
The Tigers hit the road for the first time in the regular season, taking on South Florida at 3 p.m. CT on Thursday, August 26th in Tampa, Florida.