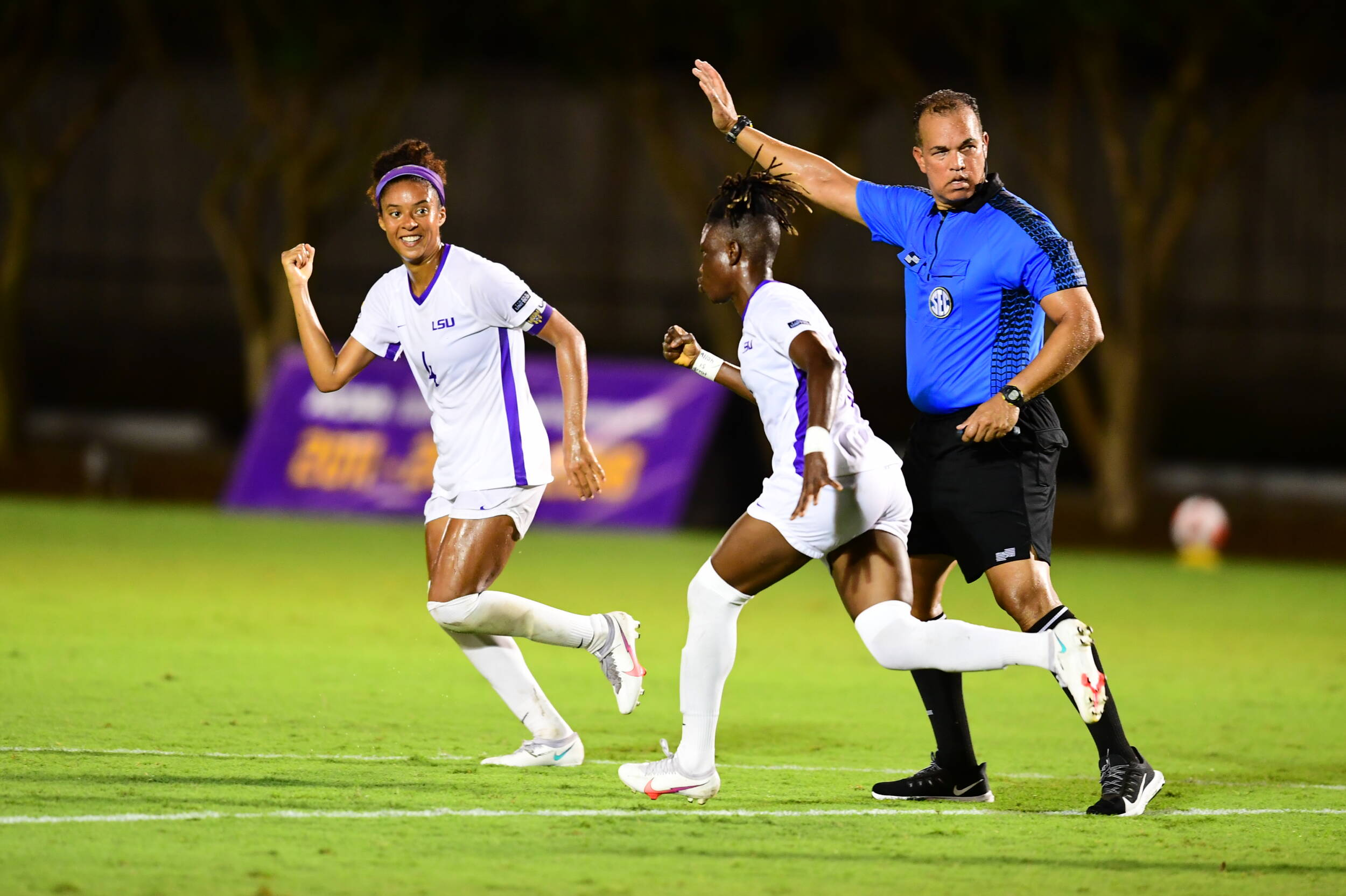 Baton Rouge, La. – The LSU Soccer team (1-0-0) began the 2021 regular season with a 2-1 win over the Southern Miss Golden Eagles on Thursday night at the LSU Soccer Stadium. The Tigers opened the scoring with only seconds left in the first half thanks to a rocket from outside the box by midfielder Jordan Johnson. The Golden Eagles drew level in the 63rd minute after Blessing Kingsley pounced on a loose ball following a goalkeeper save. LSU scored the winner in the 85th minute after midfielder Wasila Diwura-Soale found herself on the end of a loose ball and tucked the ball into the goal from six yards out.

“I thought it was a great start to the season to get a win,” head coach Sian Hudson said. “I don’t think we started the game well as we came out a bit slow, but it was great for Jordan (Johnson) to get a goal and put us ahead before half. We made great halftime adjustments and were able to press higher up the field due to these changes. Wasila’s (Diwura-Soale) composed finish put us ahead off a corner, which was great as we looked to improve our set piece taking over the offseason. Overall, there were some great things to take from tonight.”

The Tigers and the Golden Eagles traded shots to begin the game, with both teams’ efforts being blocked by defenders. Goalkeeper Mollee Swift registered her first save of the evening in the 14th minute, collecting a tame effort from Southern Miss’ Madisyn Flammia. Swift picked up two more saves in the first half in the 37th and 38th minute respectively. LSU registered its first shot on target in the 30th minute, with midfielder Athena Kuehn’s shot requiring a save from Golden Eagles’ goalkeeper Kendell Mindnich.

With 14 seconds left in the first half, LSU found the breakthrough goal. Johnson pounced on a ball cleared from the Southern Miss box. Johnson took a touch, and let it rip from 24-yards out as the ball bounced into the back of the net to give the Tigers their first goal of the season and a 1-0 lead heading into halftime. For Johnson, the goal was the first of her collegiate career.

LSU opened the second half with a close effort on goal by forward Meghan Johnson, whose shot rattled off the crossbar in the 46th minute. The Tigers continued to pressure the Golden Eagles defense, registering four more shots after Johnson’s effort, with one of those requiring a save from Southern Miss’ Mindnich in the 55th minute.

The Golden Eagles equalized against the run of play in the 63rd minute. Alice Campos sent a shot on frame that was parried away by Swift but found its way to the feet of Kingsley, who tapped it into an open goal from eight yards out.

Following the equalizer, LSU amped up the pressure as the Tigers searched for the go-ahead goal. Forward Alesia Garcia’s shot in the 76th minute was denied by Mindnich on the goal line, with the Southern Miss’ goalkeeper stopping the ball from fully breaking the plane.

The winning goal came in the 85th minute. Defender Reese Moffatt swung in a corner that found the head of Diwura-Soale, whose header was blocked in the six-yard box. Following the block, the ball was poked loose and Diwura-Soale found herself in the right place at the right time as her second effort was tucked in from six yards out. The goal was the first in Purple & Gold for Diwura-Soale, who led the Tigers in the assist column last season with four.

Swift finished the game with five saves and picked up her first win of the new season.

Garcia, midfielders Kuehn and Olivia Wilkes, and defender Lindsi Jennings made their competitive debuts for the Tigers, as well as their first start in Purple & Gold. Forward Riley Dixon was the fifth Tiger of the night to make her debut, coming off the bench in 22 minutes of action.

Up Next
The Tigers will host a Sunday showdown as the Sam Houston State Bearkats come to the LSU Soccer Stadium at 1 p.m. CT on Aug. 22.