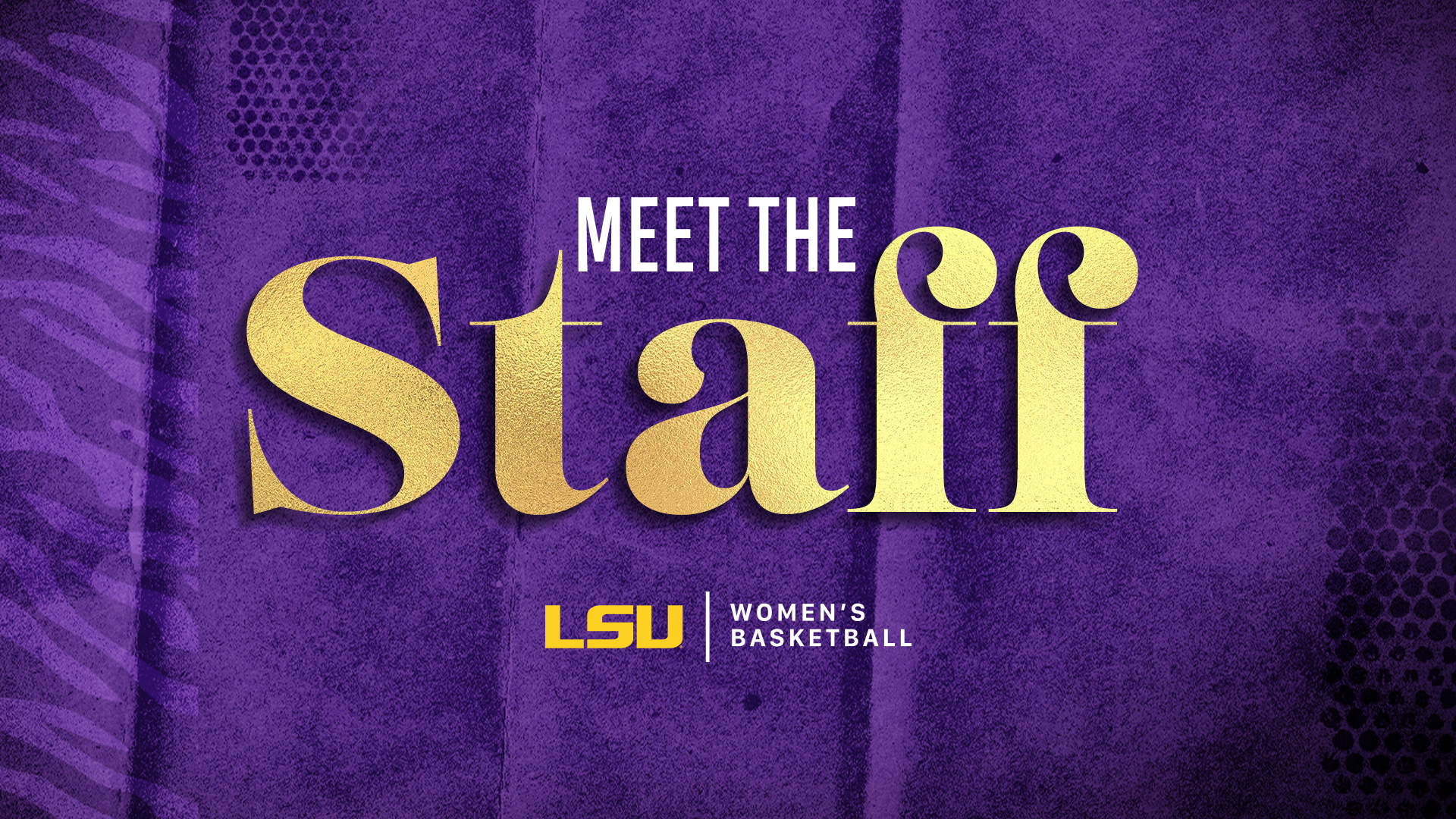 BATON ROUGE – LSU Head Women’s Basketball Coach Kim Mulkey announced on Wednesday that she has finalized her staff ahead of her first season leading the Tigers.

Mulkey, the fastest head coach in Division I history to reach 600 wins (needing only 700 games), was announced as LSU’s eighth head women’s basketball coach in April. Since her hiring, Coach Mulkey has stressed the importance of having a strong support staff around her and that is now in place.

Season tickets for the 2021-22 season are available.

Coach Mulkey named Messer as her associate head coach in June. After working together for eight years at Baylor, they have reunited in Baton Rouge. In their time coaching together in Waco, the Lady Bears posted a combined 260-23 record and won 14 Big 12 titles and captured the 2019 NCAA Championship.

Messer will work with all positions on the floor and will also oversee scouting and recruiting. During her time at Baylor, Messer helped the Lady Bears sign the nation’s No. 1 recruiting class in both 2016 and 2018 as well as No. 4 ranked classes two other times.

Messer, a former head coach at Tennessee Tech (2009-12) and the 2011 Ohio Valley Coach of the Year, was a standout player at Arkansas where she helped the Razorbacks reach the Final Four for the first time in school history in 1998.

Daphne Mitchell spent the past six years at Baylor working in an operations role and assisting in the areas of recruiting, social media, scouting and game preparation. The Lady Bears reached the Elite Eight in five of the six full seasons Mitchell was there, including the 2019 NCAA Championship.

Mitchell will step back into an on-court role with Tigers after working within operations at Baylor. She will coach the post players and help in scouting opponents. Prior to her stint at Baylor, she spent two seasons as an assistant coach and recruiting coordinator at Murray State and also has coaching experience at Jacksonville and Tennessee Tech. Daphne was a student-athlete at Georgia Tech from 2004-08.

Like Messer, Rice also served as an assistant coach under Coach Mulkey at Baylor. She will coach the guards, handle scouting duties and help in the program’s recruiting efforts. Prior to the 2019 season, Rice moved from an operations position at Baylor into a coaching role. At the time of her hire, Rice was 26 and was the youngest active coach in the Big 12 and the second youngest in the six major Division 1 conferences. In March of 2020, she was named to the WBCA’s prestigious list of ‘Thirty Under 30,’ which recognizes up-and-coming assistant coaches in women’s basketball that exemplify involvement in community service, mentorship, impact on players, professional manner, attitude and professional association involvement.

Rice began as a student manager at Baylor in 2012, a position she held for four years before she moved into a graduate assistant position within the program. After she earned her Master’s in 2017, Rice moved into her operations role with the Lady Bears. Throughout her time at Baylor, the Lady Bears reached two Sweet 16s, five Elite Eights and won two National Championships.

As the assistant athletic director of women’s basketball operations, Derrick will continue in the same role he served on Coach Mulkey’s staff at Baylor. Derrick joined Mulkey at the start of her career in Waco prior to the 2000 season, serving as an assistant coach his first seven years before moving into a position within operations. During those 21 years, he was part of a staff that won three National Championships and 23 Big 12 titles.

A native of Dubach, Louisiana, Derrick will handle the program’s business responsibilities, including budget management, opponent scheduling and team travel.  He also serves as the liaison between the women’s basketball staff and the Fast Break Club, the booster club for LSU Women’s Basketball.  He has worked closely with the booster clubs at the collegiate level for many years and looks forward to working with LSU boosters and Tiger fans

This is the second time Roberts has followed Coach Mulkey to a new job. The two worked together at Louisiana Tech where Mulkey was an associate head coach and Roberts was an assistant to the athletic director. When Mulkey took the head coaching job at Baylor, she brought Roberts in as an assistant coach and Roberts played a crucial role in the program’s rapid rise to national prominence before she moved into an operations role.

As a coach, she was one of Baylor’s top recruiters and helped land three Top 25 classes, which played a large role in Baylor’s then-three Sweet 16 appearances and the 2005 NCAA National Championship.

Serving as the teams academic liaison at Baylor, Roberts ushered the program to a 100-percent graduation rate for players that finished their academic eligibility with the school. As the Coordinator for Operations under Coach Mulkey, Roberts had numerous other duties as well such as handling player appearances, serving as the team’s liaison for external projects, supervising the team managers and working with Coach Mulkey on her public appearances. Following Baylor’s 2019 National Championship, Roberts spearheaded the team’s locker room overhaul and design.

Westbrook’s experience of working under Coach Mulkey dates back to her time as a student manager for the Lady Bears from 2009-13. After a year of working at the Waco Methodist Home and coaching basketball and track, Westbrook returned to Baylor to go back to school and was a graduate assistant for SMG at Baylor’s McLane Stadium where Westbrook oversaw the daily function of McLane Stadium as it related to Baylor athletic events, outside special events, safety and security and its tenants. She ultimately secured a full-time position with SMG.

Westbrook returned to the Baylor Women’s Basketball program in 2019 as the Associate Director of Operations. At that time, she began to work closely with Derrick and Roberts to conduct administrative and business duties for the team.

After being hired as an assistant coach and recruiting coordinator at Texas State in June, Crutchfield has joined Coach Mulkey’s staff in Baton Rouge. She will assist in recruiting, prepare game film and scout opponents for the Tigers.

Crutchfield was a graduate assistant on Coach Mulkey’s first staff at Baylor and played a key role in helping lay the foundation for what Mulkey ultimately built in Waco. Crutchfield has experience as a recruiting coordinator, a position she held at Southeast Missouri where she signed multiple ESPN Top 100 recruits. She will help in the operations of the program and will also assist in recruiting

As a high school coach, Crutchfield helped develop Teaira McCowan who was a highly sought after recruit that became a superstar in the SEC. McCowan set records at Mississippi State and went on to be the third overall pick in the 2019 WNBA Draft.

Schwartz previously worked with both the New Orleans Saints and Pelicans, where he was a service associate and assisted with daily internal operations for both franchises and provided account management for season ticket holders. He was a four-year letter winner as a member of the University of Texas basketball program.

Schwartz will create graphic design content related to recruiting efforts. In addition he will organize the Dream Team for LSU Women’s Basketball, a practice squad that will compete against the Tigers in preparing for competition. He will also assist in all on-campus recruiting matters, video coordination, basketball camps and he will help track stats and analytics.

Braud is a long-time member of the LSU Athletic Department. She is responsible for all of the day-to-day operations of the women’s basketball office, which includes but is not limited to maintaining Coach Mulkey’s calendar, as well as assisting with managing the summer camps, on-campus recruiting visits, the recruiting database, the postseason banquet and the budget.