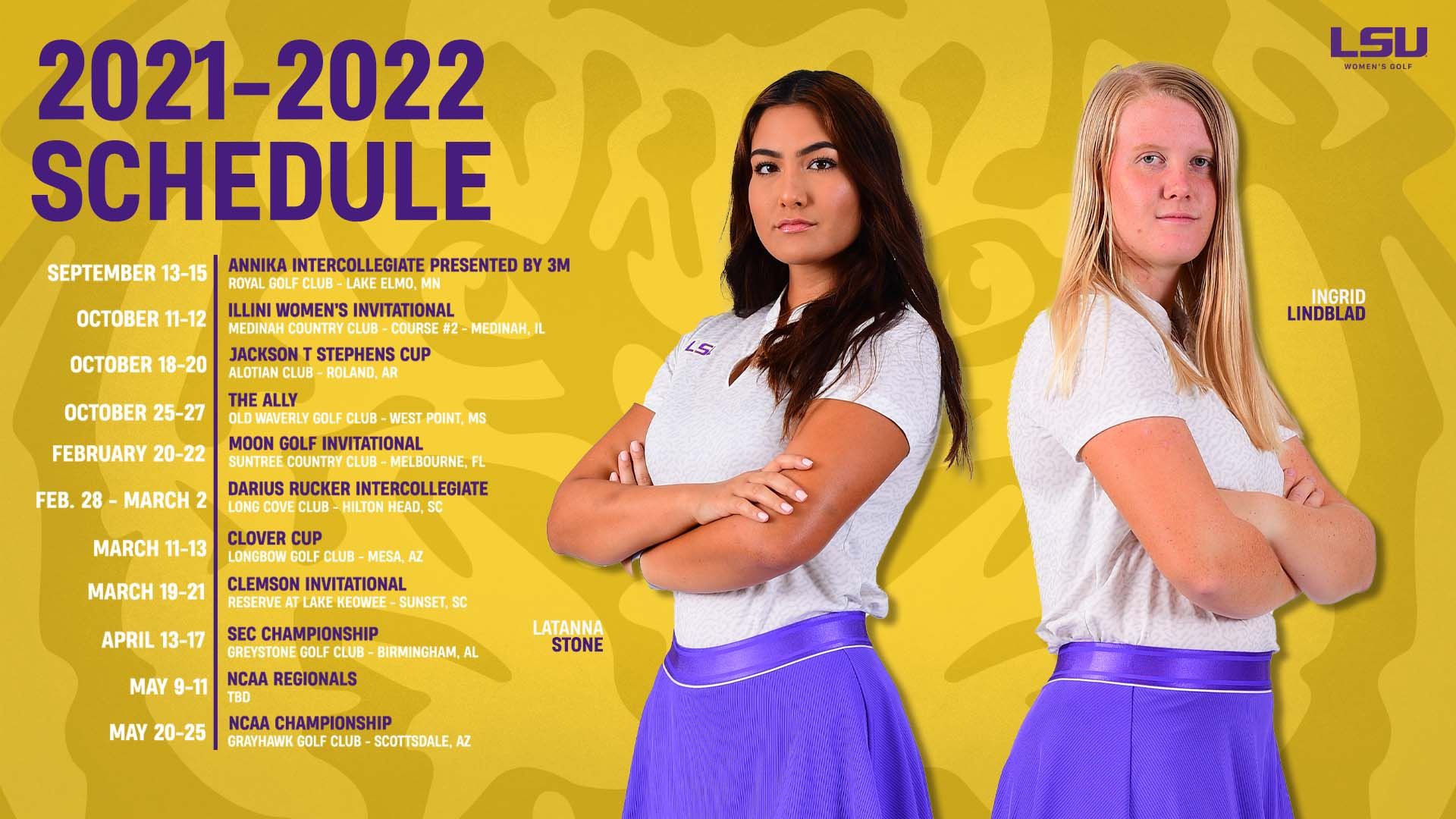 BATON ROUGE – Eight tournaments that will hopefully set the LSU Women’s Golf Team up for another run at an NCAA Championship appearance were announced on Wednesday for the 2021-22 season.

Head Coach Garrett Runion, who took the Tigers to the Southeastern Conference semifinals and a ninth-place finish in the NCAA Championship a year ago, will return for his fourth season as the head coach of the LSU women’s team.

“Last season we played the seventh toughest schedule in the country and I would expect this season’s schedule to end up being very similar if not stronger,” said Coach Runion. “We have a couple new and prestigious tournaments being televised on the Golf Channel that I know our ladies are looking forward to. I am very excited about this challenging schedule as it is spreads out across the country and will prepare our team for NCAA Regionals and Nationals as we will play on many different grasses in various conditions.”

The schedule for the nationally-ranked Tigers is split into four tournaments in the fall and the spring.

LSU will travel to Lake Elmo, Minnesota in the opener for the ANNIKA Invitational Presented by 3M at the Royal Golf Club on Sept. 13-15.

Tournament No. 2 of the season will come a few weeks later with the Illini Women’s Invitational in Medinah, Illinois, hosted at Medinah Country Club – Course #2 (Oct. 11-12).

The Tigers will wrap up the fall schedule by with two more October events, first at the Jackson T Stephens Cup in Roland, Arkansas at Alotian Club (Oct. 18-20), and then The Ally, hosted by Mississippi State, at Old Waverly (West Point, Mississippi, Oct. 25-27).

LSU finished second in The Ally, shooting 7-under as a team with first-team All-America Ingrid Lindblad finished in a tie for third at 6-under par.

The spring season will begin at the Suntree Country Club in Melbourne, Florida for the Moon Golf Invitational (Feb. 20-22). LSU also finished second as a team in that event and honorable mention All-America Latanna Stone finished second in the individual competition.

LSU will return after a year’s absence to the Darius Rucker Invitational in Hilton Head, South Carolina at the Long Cove Club (Feb. 28-March 2).

LSU will participate in two more March tournaments before the postseason begins, the first is the Clover Cup at Longbow Golf Club in Mesa, Arizona (March. 11-13). The final regular season tournament will be the Clemson Invitational in Sunset, South Carolina at the Reserve at Lake Keowee (March 19-21).

The SEC Championship will be contested at the Greystone GC in Birmingham, Alabama on April 13-17. Last year, LSU’s team set an NCAA record for 54 holes in shooting and amazing 46-under par at that location a year ago in getting the No. 1 seed for the match play portion of the tournament.

The 2022 NCAA Regionals will be hosted May 9-11 at four different sites across the country and the Tigers will find out where they’re headed after the SEC Championship. The NCAA Championship will be May 20-25 and it will return again to Scottsdale, Arizona and the Greyhawk Golf Club.