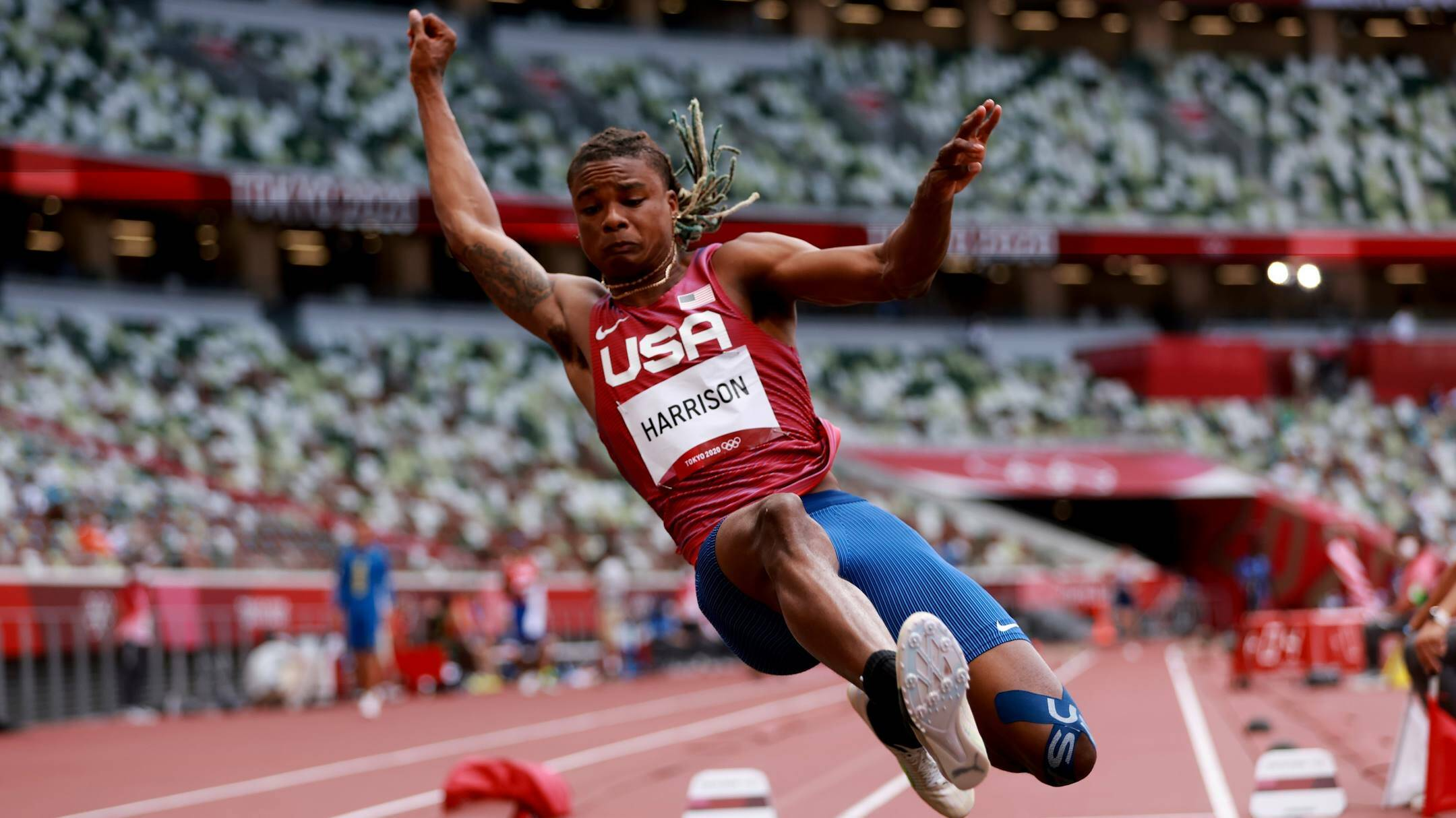 Tokyo, Japan – JuVaughn Harrison competed in two Olympic finals over the span of the last 17 hours and registered top-seven finishes in both events at Olympic Stadium in Tokyo.. He claimed seventh in the high jump (7’ 7.25”/2.33 meters) and fifth place in the long jump (26’ 9”/8.15 meters).

Struggling to find a good mark in his first two attempts, Harrison entered the third round in 10th place; the top eight competitors would earn three more jumps. Knowing the scenario, Harrison unleashed a jump of 26’ 1.50” (7.96 meters) to bump him up to seventh at the time after his third round attempt. At the conclusion of the first three rounds, Harrison wound up being bumped down to eighth, but rest assured, he earned himself three more attempts.

A fifth round jump of 26’ 9” (8.15 meters) moved Harrison up into bronze medal position, but that placing was short lived as two other competitors went out ahead of him in round five. He had one last attempt in round six but was unable to better his round five jump of 26’ 9”.

The start time for the men’s long jump was a mere 13 hours after the grueling high jump final that Harrison competed in on Sunday night in Tokyo.

In the most competitive high jump final in the history of the Olympics, LSU jumper JuVaughn Harrison took seventh with a final clearance of 7’ 7.25” (2.33 meters). The contest took place at Olympic Stadium on Sunday night in Japan, and Sunday morning in America.

It wasn’t the cleanest day for Harrison, but he sure showed some grit and heart in the competition. He opened with two clearances of 7’ 2.25” (2.19 meters) and 7’ 4.25” (2.24 meters) to start the event before he ran into a little trouble. He missed his first two attempts at the height of 7’ 5.25” (2.27 meters), but responded by clearing the bar on a must make third attempt to remain in the competition.

Harrison chose to pass at a height of 7’ 8.50” (2.35 meters). There was basically no reason for him to attempt the height if he wanted the best chance to medal with five of the previous competitors already clearing the height, and all five had the advantage over Harrison in regards to countback misses.

The bar then escalated to 7’ 9.25” (2.37 meters). Harrison took one attempt at that height, which would have been a personal best. He missed once at that height before passing to the final height of 7’ 10” (2.39 meters), which was the Olympic record. Five other men in the competition attempted the height of 7’ 10” as well, but no one was able to clear it. Harrison took two attempts at it but was unable to clear.

Harrison finished seventh due to countback misses. He now focuses his attention on earning his first career Olympic medal as he is set to compete in the final of the men’s long jump at 8:20 p.m. CT on Sunday evening. The event will take place in Japan on Monday morning.