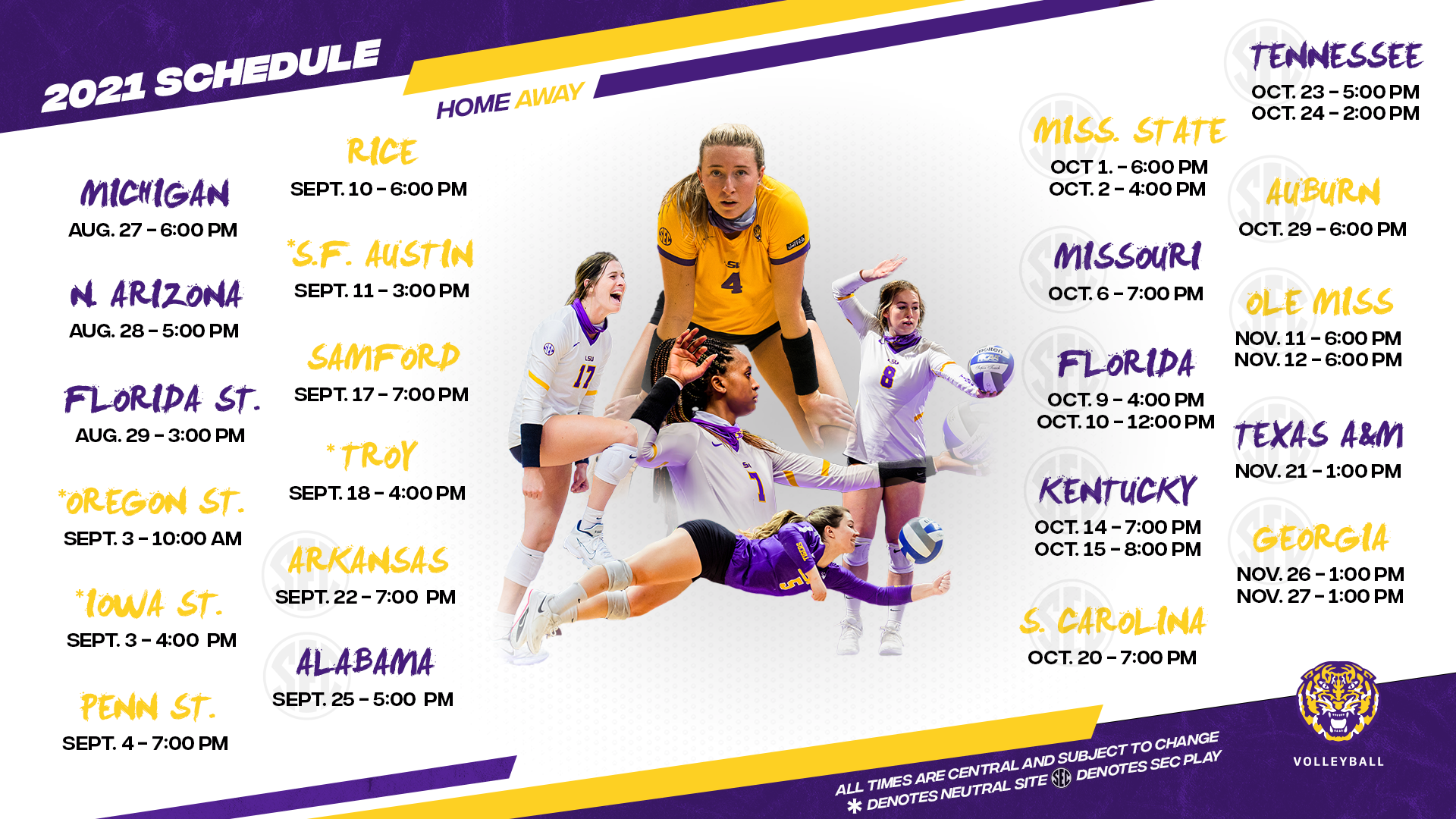 BATON ROUGE – The LSU Volleyball schedule for the fall has been finalized head coach Fran Flory announced Tuesday. The Tigers open their season on Friday, August 27 at home against Michigan.

Every player from last season’s roster is returning and the Tigers added three freshmen and two transfers. Three-time All-American Kylie Deberg from Missouri and Sanaa Dotson from Oklahoma will have the opportunity to make an immediate impact in Baton Rouge and will help bolster the Tigers’ roster to compete atop the SEC.

With the return of Taylor Bannister and addition of Deberg the Tigers will feature the SEC’s top-two leaders in kills, kills per set, points and points per set from last season. Bannister will have the opportunity to become LSU’s all-time leader in career kills this season as well.

The Tigers also return libero Raigen Cianciulli who became LSU’s all-time leader in career digs during the past season and is the only player in program history to eclipse the 1,700 dig mark.

The Tigers will look to set the tone of their season when they host Michigan on Friday, August 27. Over the next two days LSU will also play Northern Arizona and Florida State in Baton Rouge.

LSU will be on the road for the following three weeks prior to the start of SEC play. The Tigers will first travel to State College, Pennsylvania where they will have matches against Oregon State and Iowa State on Friday, September 3 followed by a match against Penn State, who finished ranked No. 12 last season, on Saturday.

The next weekend the Tigers will travel down I-10 to Houston to face Rice, a team who finished No. 23 last season, on Friday, September 9 followed by a matchup against Stephen F. Austin the following day.

For their final tune-up before SEC play begins LSU will travel to Birmingham, Alabama to play at Samford on Friday, September 17 and against Troy that Saturday.

The Tigers will begin SEC play on Wednesday, September 22 in Fayetteville, Arkansas to take on the Razorbacks. LSU and Arkansas split two matches in Baton Rouge earlier this year in February.

LSU will host Alabama on Saturday, September 25 for its home opener of SEC play.

The SEC schedule will feature some matches where two teams face each other on consecutive days, similar to the scheduling from last season. LSU’s first consecutive day matchup will be at Mississippi State on October 1 and 2.

Following those matches in Starkville, LSU will be home for its following five matches and seven of its next eight.

The Tigers will host Missouri on Wednesday, October 6 as Deberg will face her previous team where she was a three-time All-American.

A few days later Florida will come to Baton Rouge and the Tigers and Gators will go to battle twice on October 9 and 10 inside the PMAC. The Gators finished last season as the No. 5 team in the country.

On October 14 and 15, the defending National Champion Kentucky Wildcats will make their way to Baton Rouge. Kentucky became the first team from the SEC to win a volleyball national championship last season.

LSU’s home-stand will be broken up when the Tigers travel to Columbia, South Carolina for a match against the Gamecocks on Wednesday, October 20.

The Tigers will return back home right away though for two matches hosting Tennessee on October 23 and 24. The match on Sunday against the Volunteers will serve as the Tigers’ senior match.

LSU will finish its season with five of its final six matches on the road.

First up the Tigers will travel to Auburn for a match on Friday, October 29.

After nearly two weeks off, LSU will travel to Oxford, Mississippi on November 11 and 12 for two matches at Ole Miss.

The Tigers will host their final home match of the season against Texas A&M on Sunday, November 21.

To close out the regular season, LSU will travel to Athens, Georgia to face the Bulldogs twice on November 26 and 27.