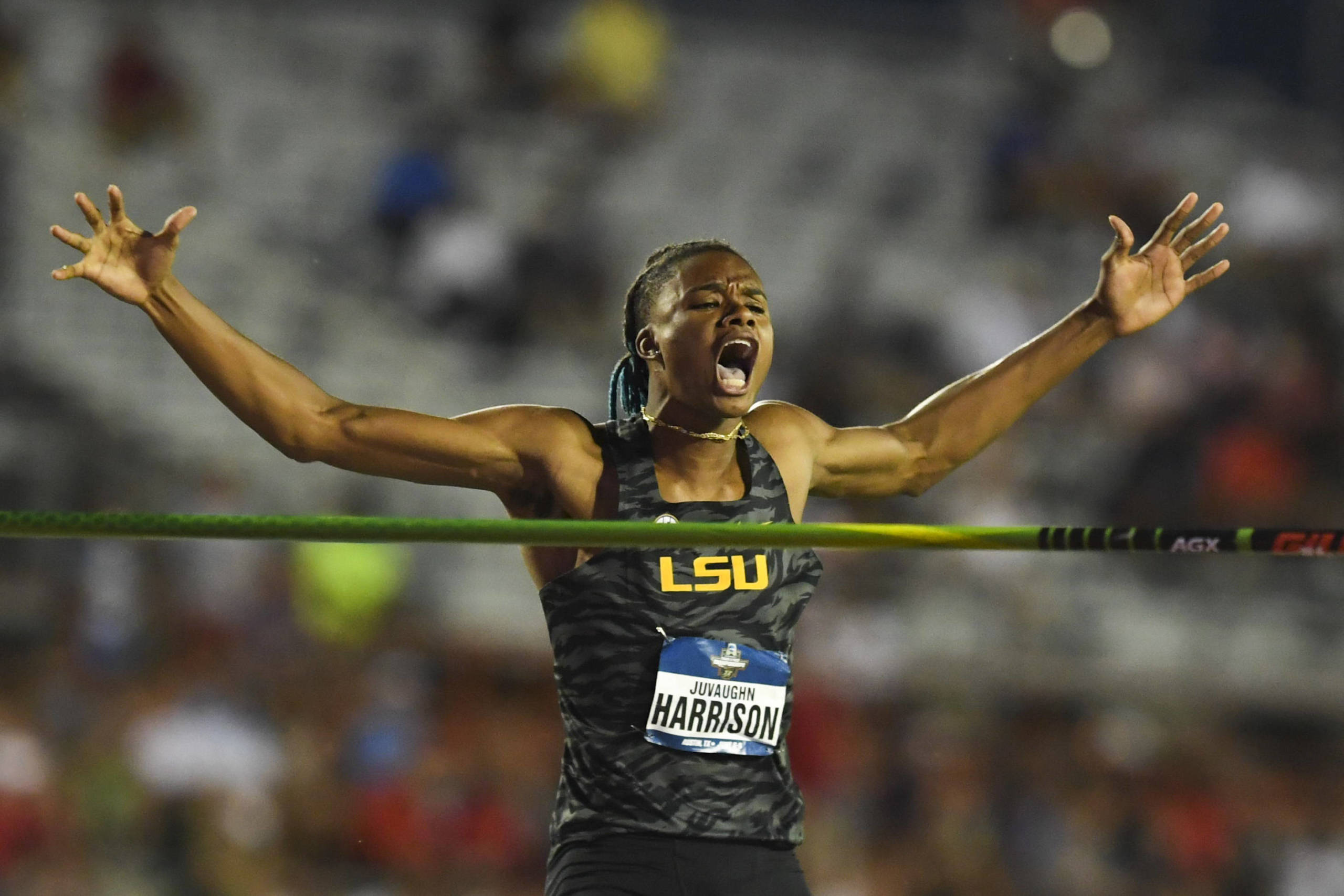 BATON ROUGE – What a run it’s been for LSU track and field’s JuVaughn Harrison. He’s accomplished everything he’s wanted to at the collegiate level – he won a team national title, he’s won six NCAA individual titles, and he owns four LSU school records. With those things accomplished, he announced Thursday afternoon that he will be turning pro.

He capped off his collegiate career by scoring 20 points at the 2021 NCAA Championships to lead LSU to its first men’s outdoor team national title since 2002. Not only did he sweep the outdoor long jump/high jump NCAA titles a few weeks back, but he did that at the 2021 indoor NCAA meet, and 2019 outdoor NCAA meet making him 6-0 in his last six NCAA competitions to close out his career.

You could say he made a name for himself at the 2019 NCAA outdoor meet when he became the first man in history to sweep NCAA titles in the long jump and high jump, but there was still room for improvement. Anybody can do it once. But how about two or three times? That’s when you know it’s real. He repeated the feat, that nobody else in NCAA history had accomplished, twice more in 2021 at the indoor and outdoor NCAA meets.

In addition to his four LSU school records, Harrison owns three all-time top-10 NCAA marks. His personal best high jump outdoors of 7’ 8.75” (2.36 meters) at the SEC Championships this May is the second best in collegiate history outdoors, his indoor personal best long jump of 27’ 8.75” (8.45 meters) ranks No. 3 in NCAA history, and his outdoor in collegiate action best long jump of 27’ 8.25” (8.44 meters) is the sixth best in NCAA history.

He owns the most NCAA individual titles in LSU history with six alongside fellow jumper Walter Davis from back in the early 2000s. He also captured six SEC event titles during his career including three straight in the indoor high jump from 2019 to 2021.

Going back to April 13th of 2019, JuVaughn has competed collegiately 32 times in an LSU uniform. He won 25 of those competitions and finished no worse than fourth place in any event that he took part in. He’s one of 10 semifinalists for The Bowerman currently and is the landslide favorite to take home collegiate track and field’s top honor after his performances this year.

And then most recently, he made more history. He swept the long jump/high jump competitions at the U.S. Olympic Trials on Sunday at Hayward Field to earn his first every Olympic berth for Team USA. Not only did he win with some very impressive marks – 7’ 7.75” (2.33m) in the high jump & 27’ 9.50” (8.47m) in the long jump – but he also became the first man to represent the United States at the Olympics in both events since Jim Thorpe did so in 1912.

His meteoric rise to the most prolific high jump & long jump combo jumper in history has been a treat to watch. His name will forever be etched in the LSU record books for a number of things, but none more so than his six straight NCAA titles in a pair of events that don’t often mesh. Mr. Jumps will take his name worldwide later this summer when he competes for Team USA at the Tokyo Olympics with a contending shot to win golds in both events.