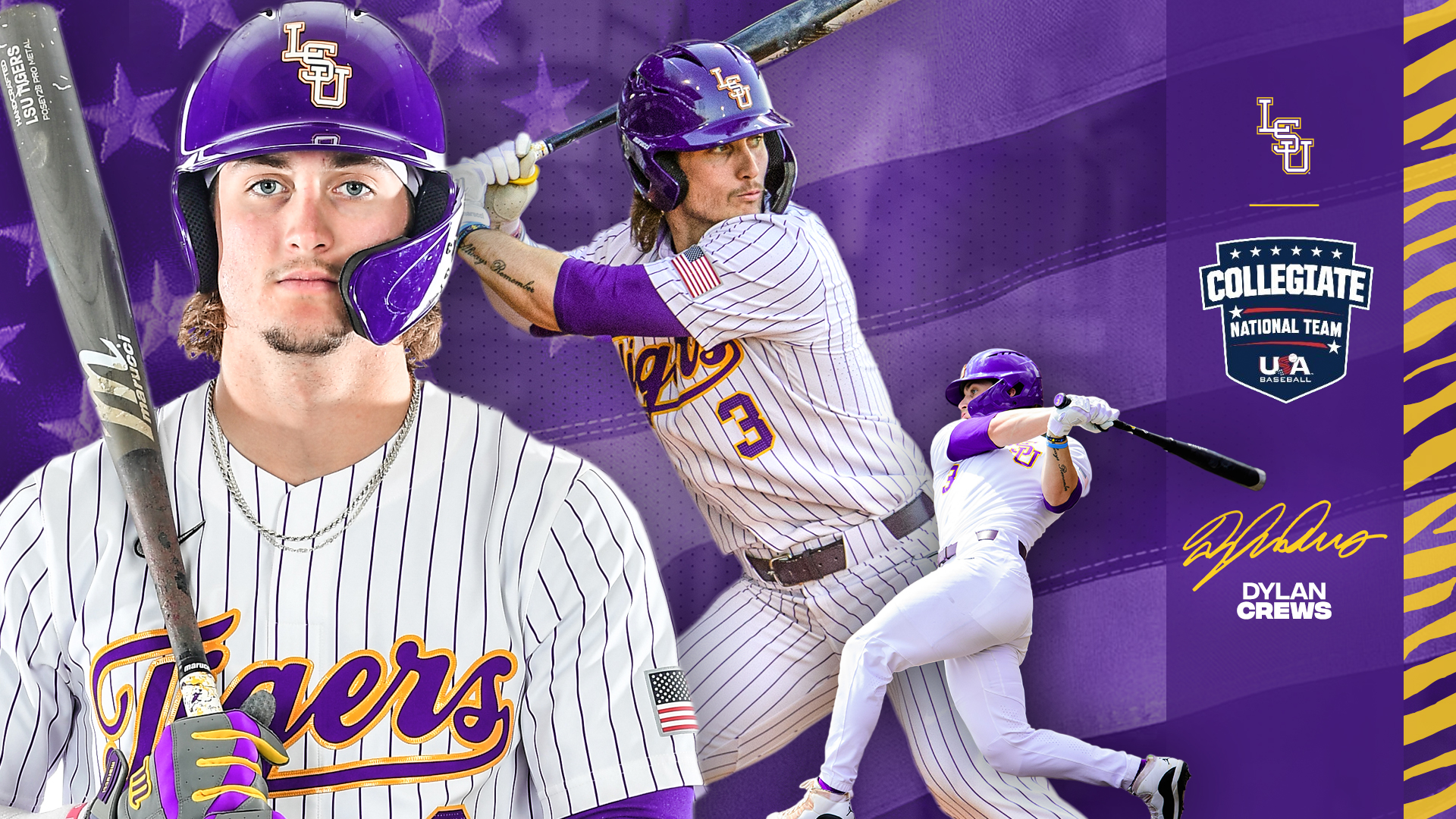 BATON ROUGE, La. — USA Baseball announced Thursday that LSU freshman outfielder Dylan Crews is part of the 45-man 2021 Collegiate National Team roster that will be split into two teams to compete in an 11-game Stars vs. Stripes intra-squad series starting on Friday.

Crews batted .362 this season at LSU with 16 doubles, two triples, 18 homers, 42 RBI, 64 runs and 12 steals, and he was named the Perfect Game National Collegiate Freshman of the Year.

“We are thrilled to have such a strong group representing the U.S. on the 2021 Collegiate National Team as we tour through the cities of the Appalachian League this summer,” said Eric Campbell, USA Baseball Collegiate National Team General Manager. “This year’s team offers a unique experience to play with, and against, some of the best collegiate baseball talent in the country in some of the best baseball communities, and we are looking forward to an incredible series.”

The U.S. roster is highlighted by eight USA Baseball alumni, including Crews and two other players that have competed for Team USA multiple times. Crews, Justin Campbell of Oklahoma State and Robert Moore of Arkansas have all suited up for the Red, White and Blue twice.

Campbell helped the 2013 12U National Team win the program’s first-ever gold medal at the International Baseball Federation “A” World Cup, and Moore will also reunite with his 2014 12U National Team teammate Paul Skenes of Air Force on the 2021 Collegiate National Team.

The Collegiate National Team will not play an international opponent in 2021; instead, the Stars and Stripes will play an intra-squad series with 10 of their 11 games in the cities of the Appalachian League which is currently in its first season as a summer collegiate league as part of the Prospect Development Pipeline (PDP). The Appalachian League also serves as a national team pathway and identification event for the Collegiate National Team and other USA Baseball national teams.

Team USA will kick-off its tour on Friday in Danville Va., and will finish the series on Thursday, July 15, in Bluefield, W. Va. The U.S. will also play on the Fourth of July at the USA Baseball National Training Complex in Cary, N.C.

The team will be led in 2021 by head coach Elliott Avent of North Carolina State. Avent, who just finished his 25th season as the head coach at NC State with an appearance in the 2021 College World Series, was named the manager of Team USA in April. He will be joined on staff by pitching coach Kevin O’Sullivan (Florida), as well as Bobby Austin (Mississippi State), Dan Hartleb (Illinois), Kobe Phillips (NC Central), Josh Pike (NC State), Alex Sogard (Wright State), Troy Tulowitzki (Texas) and Jerry Weinstein (Colorado Rockies).

The full 45-man 2021 Collegiate National Team Roster is as follows: