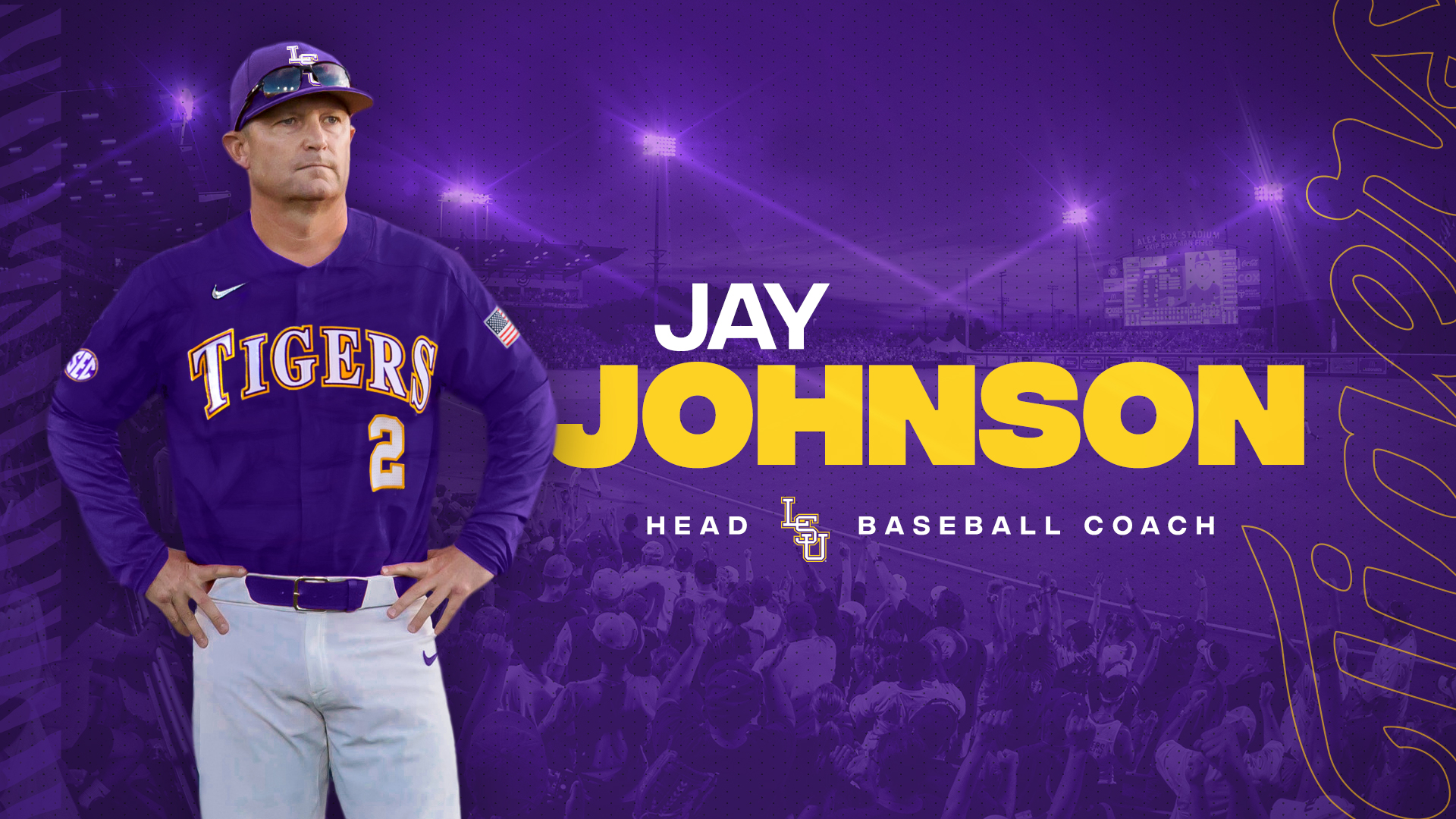 BATON ROUGE, La. — Jay Johnson, the reigning Pac-12 Baseball Coach of the Year who led Arizona to a conference championship and a berth in the College World Series in 2021, has been named the head coach of the six-time national champions LSU Tigers, director of athletics Scott Woodward announced Friday.

“LSU Baseball is the premier program in the nation, and the interest we received from great coaches across the country was significant,” Woodward said. “Ultimately, Jay’s track record of postseason success, explosive lineups, and highly-ranked recruiting classes set him apart from the field. He’s made an immediate impact at every program he’s led, and he’s one of the most energetic, innovative, and focused coaches in America. I am confident he is ready to add to our extensive championship tradition at LSU, and we welcome Jay and Maureen to Baton Rouge.”

“I am humbled and honored to be the head baseball coach at LSU and serve as the steward of the next generation of national champions,” Johnson said. “LSU is a phenomenal University and athletics department, and I am very thankful to Scott Woodward and Stephanie Rempe for entrusting me to lead this storied program into its next winning chapter. I view this as the opportunity of my lifetime and will do everything in my power to have our team playing a brand of baseball that makes everyone at LSU, the Baton Rouge community, and the entire state of Louisiana incredibly proud. Geaux Tigers!”

Johnson will be introduced at Alex Box Stadium, Skip Bertman Field on Monday, June 28, beginning with a press conference open to media only at 4:30 p.m. in the Champions Club. Fans are invited to watch a live stream of Johnson’s press conference on the video board inside the stadium and remain after for an on-field Q&A following his remarks to the media.

The architect of college baseball’s best offense in 2021, the 44-year-old Johnson led Arizona to two College World Series appearances – including a Championship Series berth in 2016 – over five full seasons, regularly producing the nation’s most potent lineups and signing top players from across the country.

After landing college baseball’s No. 4 recruiting class in the fall, Johnson’s 2021 Wildcats smashed their way to Omaha in the spring, leading the nation in hits and ranking first in the Pac-12 in runs, hits, doubles, triples, RBI, walks, batting average, on base percentage, slugging percentage, total bases, and extra base hits.

When he was hired by Arizona after the 2015 season, Johnson took the reins of a program with a rich tradition and instantly made it richer. When he arrived in Tucson, the Wildcats had won four national championships, recorded three national runners-up finishes (now four), made 16 CWS appearances (now 18), and made 37 NCAA Tournament appearances (now 40).

Johnson’s impact was immediate. In 2016, he became the fifth coach ever – and the first since 1994 – to lead his team to the College World Series finals in his first season. That team, which had finished 12-18 and 9-21 in the Pac-12 in its previous two seasons, slugged its way to Omaha, finishing fifth nationally in hits and leading the conference in walks, doubles, hits, runs, and stolen bases. The Wildcats returned to the NCAA Tournament in 2017 and finished first in the Pac-12 in batting average, doubles, hits, on base percentage, runs, scoring, and slugging percentage. In 2019, Johnson’s offense led all Power 5 teams and finished second nationally in runs per game, slugging percentage, and on base percentage, while finishing third in batting average and total runs.

In addition to his reputation for developing hitters, Johnson is also considered one of the top recruiters in college baseball. Both Baseball America and Collegiate Baseball ranked Johnson’s 2020 signing class No. 4 in the country – the highest ranking for a program west of the Mississippi River. The class featured 14 players from six states, including two players who ranked in Perfect Game’s Top 100 prep rankings. In 2018 and 2019, Johnson landed Collegiate Baseball’s No. 3 and No. 11 ranked classes, respectively.

Arizona was not the first program where Johnson’s impact was felt instantly. Prior to his success at Arizona, Johnson spent two seasons as head coach at the University of Nevada, earning Mountain West Coach of the Year honors in 2015 and leading the Wolfpack to their first ever conference championship in just his second season. That year, the Wolfpack finished 41-15 and ranked first in the country in on base percentage, second in slugging percentage, and third in batting average.

Johnson spent 2006 to 2013 as the associate head coach at the University of San Diego, where he spearheaded recruiting efforts and served as the hitting coach over eight seasons. There, Johnson helped sign the nation’s No. 1 class in 2008 and No. 2 class in 2010, and USD’s lineups topped the WCC in hitting six times. At USD, Johnson recruited and coached Kris Bryant, who won the Golden Spikes Award and the Dick Howser Award as the nation’s top player before the Cubs selected him No. 2 overall in the 2013 MLB Draft.

Johnson’s coaching career began at his alma mater, Point Loma Nazarene, where he served as an assistant coach from 2002 to 2004 before accepting the head coaching position in 2005 at 27 years old. He finished his playing career at Point Loma in 2001, hitting .326 as a senior and earning a Gold Glove as the team’s starting second baseman.

A native of Oroville, Calif., Johnson becomes the 26th head coach in LSU baseball history, succeeding Paul Mainieri, who retired after the 2021 season. Johnson and his wife Maureen, a former University of Arizona soccer player, were married in 2016.