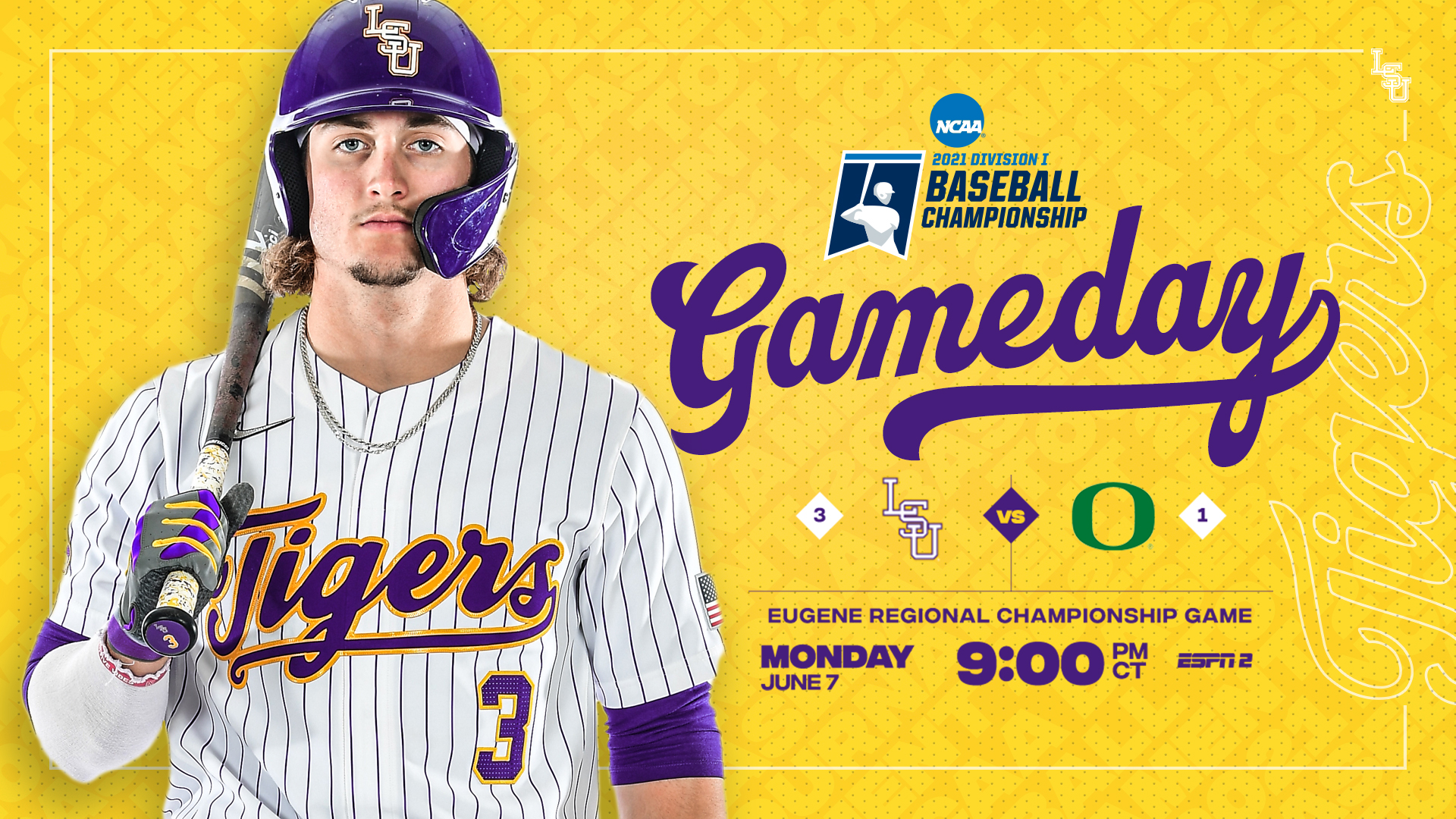 Earlier in the day, the Tigers eliminated Gonzaga from the regional with a 9-4 victory. LSU starting pitcher AJ Labas (4-2) led the Tigers to the win by firing eight innings and limited the Bulldogs to four runs on six hits with two walks and eight strikeouts.

LSU (37-23) will face Oregon (39-15) again at 9 p.m. CT Monday night in game that will determine the regional champion. The winner will advance to face Tennessee next weekend in an NCAA Super Regional in Knoxville.

Monday’s game will be televised on ESPN2, and it can be heard on affiliates of the LSU Sports Radio Network.

“It was obviously a long day at the ball park for our guys,” said LSU coach Paul Mainieri. “AJ Labas did a wonderful job and was able to save our bullpen for the second game. Javen Coleman was awesome, and it played out just as we had hoped. I couldn’t even have dreamt that Javen would do as well as he did.”

Coleman (3-1) limited Oregon to one run on three hits in six innings with three walks and six strikeouts. He relieved Trent Vietmeier, who started the game for LSU and pitched a scoreless first inning.

Oregon starter Brett Walker (6-3) was charged with the loss as he surrendered four runs – three earned – on nine hits in 7.2 innings with one walk and five strikeouts.

LSU closer Devin Fontenot blanked Oregon over the final two innings to earn his fifth save of the season. Fontenot did not allow a hit and recorded one walk and three strikeouts in his outing.

LSU grabbed a 1-0 lead in the top of the first inning against Walker when rightfielder Dylan Crews doubled, moved to third on second baseman Zach Arnold’s infield single and scored on a groundout by first baseman Tre’ Morgan.

Oregon tied the game in the third when second baseman Gavin Grant led off with a single and later scored on designated hitter Kenyon Yovan’s sacrifice fly.

LSU extended its lead to 3-1 in the sixth when Dugas blasted a triple off the centerfield wall and scored when Oregon leftfielder Tanner Smith bobbled the ball after trying to pick it up.

Crews led off the sixth inning by blasting his 16th homer of the year, increasing LSU’s advantage to 4-1.

“We had a tremendous victory against an outstanding ball club in Oregon,” Mainieri said, “and it sets the stage for one game, winner-take-all on Monday night. I just can’t tell you how proud I am of our guys, and we’re just not giving up.”

In LSU’s first game on Sunday, Gonzaga opened the scoring with two runs in the top of the first inning against Labas, as the Bulldogs loaded the bases with nobody out and scored on fielder’s choice grounders by first baseman Andrew Orzel and by rightfielder Grayson Sterling.

LSU responded with four runs in the bottom of the first as Morgan lined an RBI double, Dugas smashed a two-run triple and third baseman Cade Doughty contributed a sacrifice fly.

Gonzaga narrowed the gap to 6-3 in the third on Orzel’s RBI double, but LSU extended its lead to 8-3 in the bottom of the frame on fielder’s choice RBI grounders by shortstop Jordan Thompson and by catcher Alex Milazzo.

Second baseman Mason Marenco provided an RBI double for the Bulldogs in the sixth, but LSU designated hitter Zach Arnold launched a solo homer to extend the Tigers’ advantage to 9-4.

Gonzaga starter Alec Gomez (5-4) was charged with the loss, as he allowed six runs on six hits in one inning with one walk and no strikeouts.