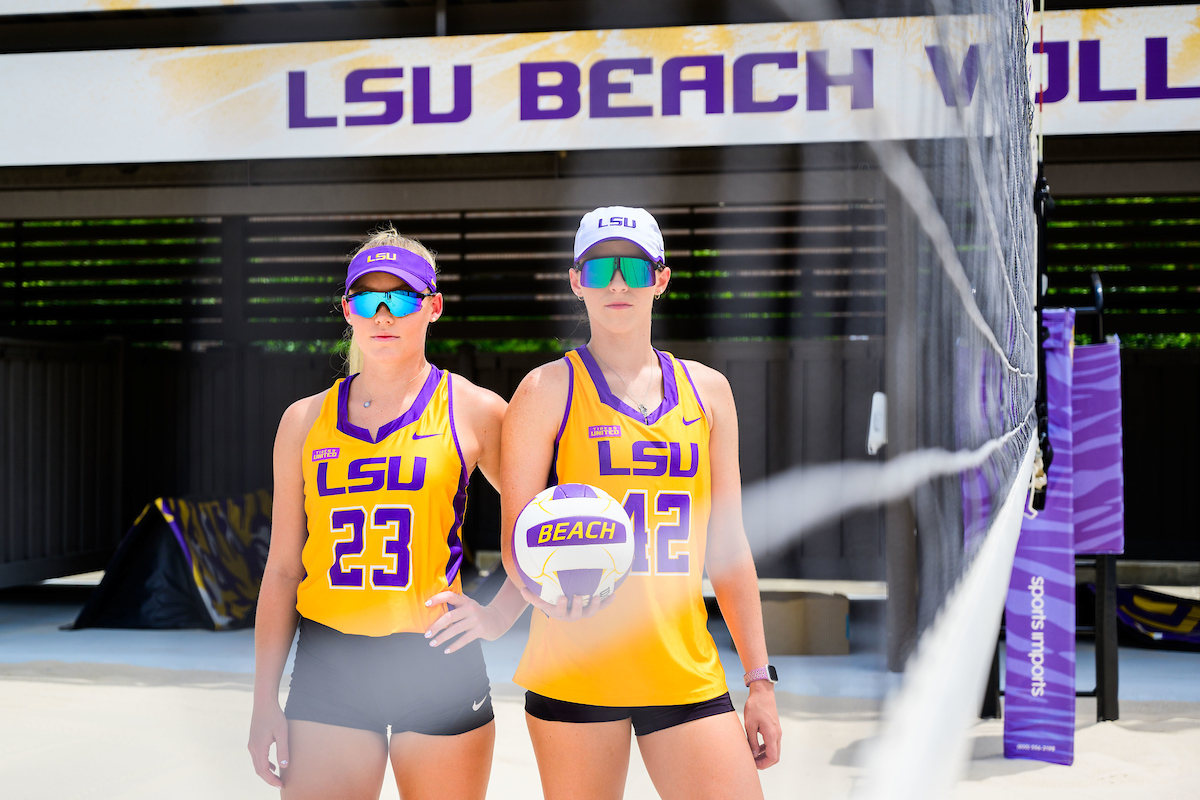 Great beach volleyball pairs feed off of each other. They find ways to make each other better. They elevate each other’s strengths and minimize their weaknesses and they trust one another’s game.

Partway through the 2019 season Ashlyn Rasnick-Pope and Toni Rodriguez were paired together. As two first-year college beach volleyball players, they were both coming off partnerships that were good, but together they wanted to prove that they were great.

When they first came together Rasnick-Pope was a freshman who had more beach experience than Rodriguez who had joined the team after an indoor career at LSU. They were both trying to find their footing within the beach program. Three years later, Rasnick-Pope is a junior with veteran experience and Rodriguez has spent enough time in the sand to become a refined beach volleyball player. They’ve grown together.

Rasnick-Pope and Rodriguez are the second winningest pair in program history. They have 44 wins together, have competed at a NCAA Championship as a pair in 2019 and have helped lead LSU to become a real national title contender.

It might be surprising to know then that it was two losses on the same day earlier this season that has helped define who this pair is heading into Gulf Shores. During LSU’s trip to California in early April, Rasnick-Pope and Rodriguez dropped two matches to UCLA’s Lindsey Sparks and Devon Newberry. Both of the matches were extremely close, each going three sets. But Rasnick-Pope and Rodrigiez lost on Court 3 and LSU lost both, nonetheless.

They did not have time to be upset though as the next day the Tigers had two more matches against USC. They got reassurance during an open and honest conversation with assistant coach Cati Leak where the pair realized what they needed from each other, specifically at the end of tight matches. They also realized that it was little mistakes on their side of the net that prevented them from winning.

“We don’t care who we’re playing,” Rodriguez said. “It was like that before, but in that game there were things we were doing that we could just clean up. That was the conversation. What do we need to do a little bit better tomorrow to beat USC?”

“Going into the next day,” Rasnick-Pope explained, “we were not going to be denied a win because we knew what we were capable of.”

The next day, Rasnick-Pope was on fire and Rodriguez was a menace to whoever the Trojans had on Court 3. It took them two sets to defeat USC’s Mollie Ebertin and Haley Hallgren in the first match. USC switched up the pair and put Paige Dreeuws with Hallgren for the second match, but it didn’t matter and the LSU duo took the match in three sets.

Rasnick-Pope and Rodriguez went 2-2 during the California trip and LSU went 1-3, the only victory coming in the first match against USC. As Rasnick-Pope and Rodrgiuez realized as a pair that these matches were coming down to little things that they had control over, much of the rest of the team was coming to the same realization.

The Tigers were good enough to win these matches against other top teams. They just needed to limit mistakes on their side of the net. It’s been a point of emphasis through the season since that point and is a main focus as the team is currently training for Gulf Shores.

The physical pairing of Rasnick-Pope and Rodriguez almost never had a chance to flourish though. Rodriguez was not always supposed to be here. The St. Amant, Louisiana native who grew up just a 30 minute drive from LSU’s campus did not originally intend to be a Tiger and she’s in rare territory as a seventh-year player after building her career from the ground up through injuries.

Before she was 6-1 beach blocker, Rodriguez was an accomplished outside-hitter at St. Amant High School. She had a full-ride scholarship offer to Tennessee and was fully prepared to be a Volunteer.

“It is what I thought the plan was,” Rodriguez simply stated.

The plan was going to change. A few games into her senior season – the season she says her team was supposed to win state – Rodriguez tore her ACL and Tennessee pulled her scholarship. She talked to LSU indoor coach Fran Flory, who happened to be in the process of starting LSU’s beach volleyball program, and Flory gave Rodriguez the opportunity to walk on at LSU. She would practice and train with the team, but throughout that first year would not travel with the team. The entire situation lit a fire under Rodriguez that might still be burning today.

“I wasn’t strong enough and looking back just coming off injury, there’s no way I could have played at that level,” Rodriguez reflected. “Now did I bust it in practice every single day and did I challenge the A-side? It fired me up and Cati Leak can attest to that. I played against her every day in practice. I tried to kick their butts.”

Her hard work paid off and the following season Rodriguez earned a starting spot for the Tigers. With 136 kills (third most on the team that year) and her career seemingly just getting off the ground, Rodriguez suffered another torn ACL.

She credits Alisha Tolbert who was the team’s athletic trainer then with getting her through rehab and ready to finish her indoor career as a leader for the Tigers.

“I wouldn’t take any of those surgeries back,” explained Rodriguez who also had shoulder surgery last spring. “They’ve built me as a player and they’ve shaped me into who I am today. I’ve been able to gain a really good mental toughness. I’ve been able to come back from all those injuries. It’s taught me how to fight and work harder and just do what I need to do every single day to get where I am.”

She’s put in the time and she’s put in the effort to be where she is today as a member of LSU’s Court 3 beach pair with Rasnick-Pope, leading the Tigers to the NCAA Championship Tournament where she will compete for LSU one final time.

From the moment she stepped on to campus, Rodriguez has always had a competitive spirit, but she has always strived to improve her confidence, something that is essential to being part of a great pair. The duo’s relationship has strengthened this year both on and off the court.

They exude confidence in the way they play physically and the way they communicate with each other. To be a great pair, each partner must be willing to take constructive feedback and put it to positive use. It’s something that Rasnick-Pope believes has allowed them to flourish this season. Going into Gulf Shores the pair 22-4.

Their four losses have come against Florida State and UCLA and all four of them have come down to a third set. They’ve had an opportunity to win all of them. In Gulf Shores it will be about closing and taking care of their side of the net.

Neither of them lack intensity and they have both refined their games tremendously since they first became a pair in 2019. The duo that originally was able to bulldoze lesser teams because of their physicality have meshed their games to play cohesively and create more opportunities for each other.

Rodriguez admits that her shoulder surgery has forced her to evolve in the type of shots she hits, but gets excited when talking about how hard the shorter Rasnick-Pope can drill them. Rodriguez has added hand-setting to her arsenal of skills, allowing her to place balls precisely for Rasnick-Pope to kill. Rodriguez is also long and can block or touch many balls at the net, giving Rasnick-Pope more opportunities to dig balls. Rasnick-Pope has added a jump serve to her repertoire that can force other teams out of system more and she’s also begun to understand the game better defensively, according to Coach Russell Brock.

The season shifted for them after the two losses at UCLA. That day also helped Rasnick-Pope remember why she originally fell in love with the sport of beach volleyball. She admits that amidst the competition, she felt joy playing against UCLA.

“I think a lot of us were just getting tense playing,” Rasnick-Pope explained. “I think those games reminded us to have fun. Now we’re able to go out in these bigger games and just relax and just play and I think that has been the biggest difference from the beginning to the end of the season.”

If they do what they are capable of doing – if they play like a great pair – Rasnick-Pope and Rodriguez can help LSU accomplish something it has never done before.

“I bleed purple and gold,” Rodriguez declared. “Every time I’m out there, I’m doing it for LSU.