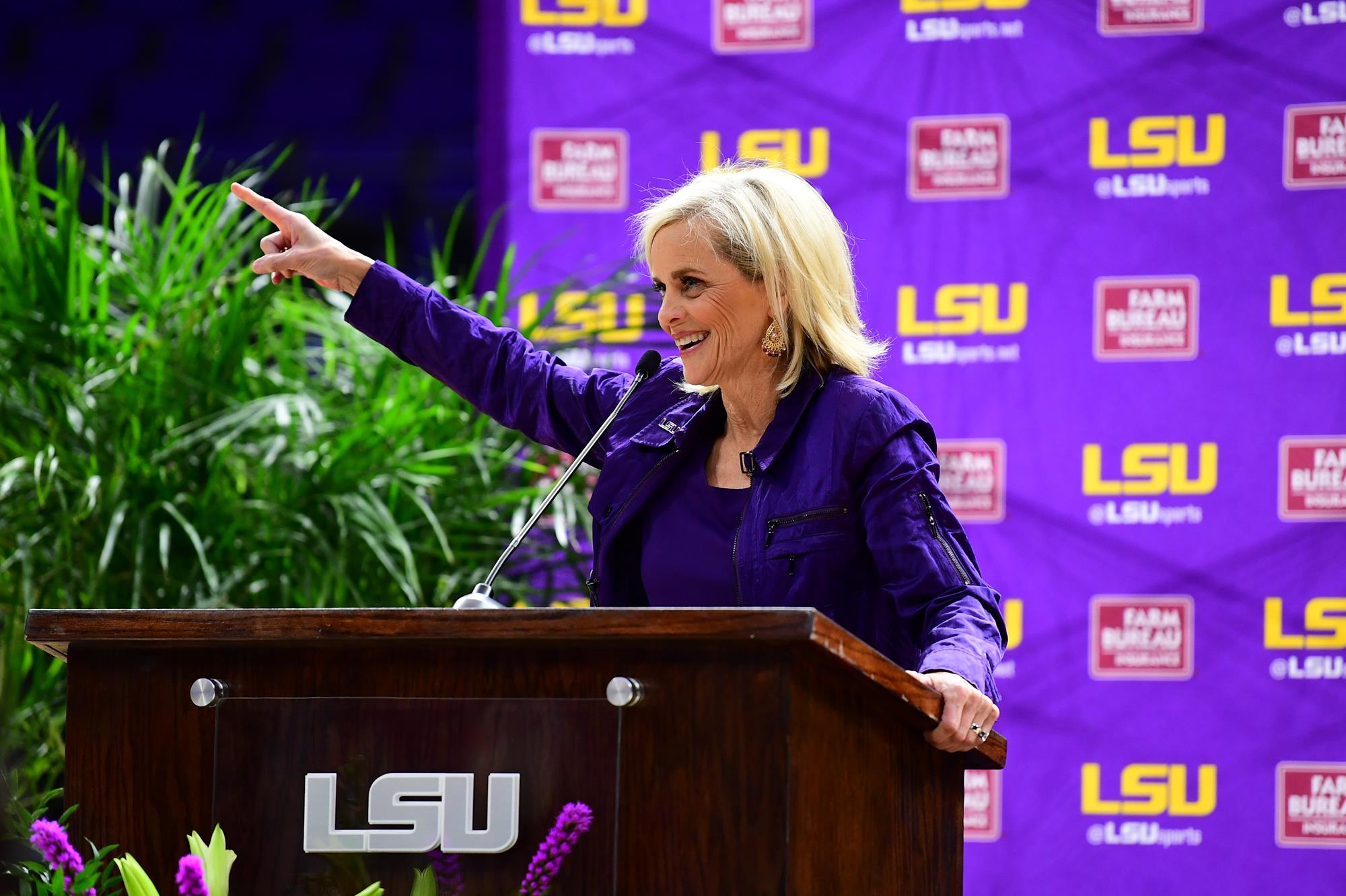 Wearing a purple jacket with an LSU pin, Kim Mulkey felt happy to be home.

Introduced on Monday as the eighth head coach in LSU women’s basketball history, Mulkey addressed the fans, and a handful of her current players at the Pete Maravich Assembly Center in her first day as leader of the Fighting Tigers.

It was a homecoming and an introductory press conference unlike any other, in front of friends and family, for a Tickfaw, Louisiana native who felt ‘unbelievably comfortable’ to come back to her roots.

She’s never forgotten where she comes from. She’s proud to be from Louisiana. And while Mulkey admitted her decision to return home wasn’t an easy one to make, causing many sleepless nights and many tears shed, it just felt right. It was a feeling in her gut. Life, she says, is about timing, and it felt like the right time to go home.

“I came back to my home state,” Mulkey said. “If you have followed my career, I’ve said it numerous times: No matter where I go to coach, no matter where my career takes me, Louisiana is my home.”

A big day for LSU Women’s Basketball. The future is bright. pic.twitter.com/GaJUQsT6cL

MULKEY IS A WINNER: She’s the only person in the sport to win a national championship as a player, assistant coach and head coach. She boasts the third-highest winning percentage in women’s basketball history (.859), and she’s a three-time national championship-winning coach.

The most accomplished head coaching hire in LSU history. The most successful player-turned-coach in college basketball history. A soon-to-be Naismith Basketball Hall of Fame inductee in May. The accomplishments are unprecedented — and she’s got plenty more to prove with the Tigers.

Most of all, she requires excellence. You can feel Mulkey’s passion and enthusiasm just by being in her presence. You don’t build a résumé like hers without those qualities. She’s going to be demanding. She’s going to bring a new intensity to the PMAC. It’s her personality that she feels embodies what it means to be from Louisiana.

“It’s not a secret: I do coach with passion,” Mulkey said. “I do coach with intensity. But I think I learned that from the great state of Louisiana. We’re fighters.”

When you’re hired to lead a team, Mulkey says, sometimes it’s to lead a program that’s never experienced winning. That’s not the case at LSU. The history is rich and filled with success. All you have to do is look up at the rafters. One crucial detail is missing from those banners, though, that she feels she can provide during her tenure in purple and gold.

See those five Final Four banners up there? Nowhere does it say national champion.

?? That Is What I Came Here To Do pic.twitter.com/ljnVeVrPVb

Although a new addition to the women’s basketball staff, Mulkey is no stranger to the Baton Rouge community or the LSU family. Yes, she’s Kramer Robertson’s mother; everybody knows that. She didn’t need to see the crowds at his baseball games to realize how special LSU was. When you’re from Louisiana — you already know that.

“I already knew how special of a place it could be,” said Mulkey. At those baseball games, never, ever did I think I would be at LSU. But I’ll say this: God works in mysterious ways.”

Mulkey has been a winner at every level of the sport. Her unparalleled résumé proves that. The focus now turns to getting LSU back to competing for championships again. It’s not going to happen overnight, a saying she repeated many times during her press conference, but it’s a winning culture she hopes she can expedite quicker than most.

“Be patient,” Mulkey said. “Understand that it will not happen overnight. I’m going to repeat that over and over. There’s a lot of things to do, and we’ll do it as quickly as we can, but we won’t do any shortcuts.”

Mulkey didn’t just come to LSU to win championships. She came here to make an impact at the right time. Her decision transcended basketball.

“I am proud and I am honored to be your next women’s basketball coach,” Mulkey said in closing. “Thank you for bringing me home. Thank you for trusting in my abilities. And as Coach O says, Geaux Tigers.”