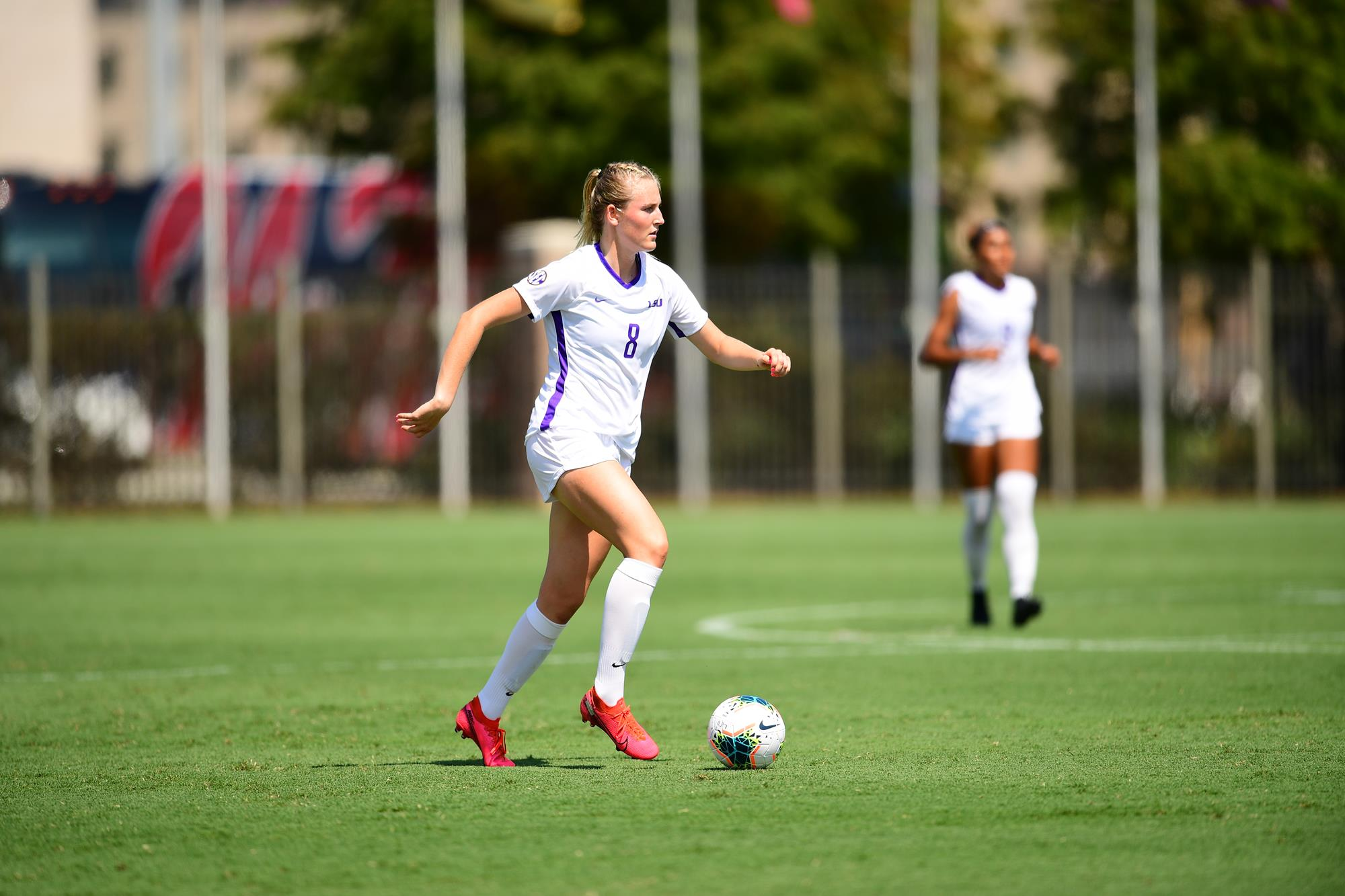 Baton Rouge, La. – The LSU soccer team fell 1-0 in a tight contest against the Ole Miss Rebels on Sunday afternoon at the LSU Soccer Stadium. The Rebels scored in the 58th minute with a header by Sadie Holland off a corner kick. The loss drops LSU to 0-2-0 on the season, and Ole Miss improved to 1-1-0.

“I thought we owned the game for the first 25 minutes with our control of possession and dangerous opportunities down our left side,” head coach Sian Hudson said. “We needed to capitalize on a few of those moments where we had momentum, but we didn’t.

“Ole Miss came into the game after that and began to get good looks in transition and was able to get the goal from the corner. We controlled large periods of the game and created opportunities, but now we just need to have more quality in the final third and put those chances away.”

LSU opened the match with an attacking front and controlled possession for most of the first half. The first solid chance for the Tigers came in the sixth minute, when sophomore Rammie Noel sent a ground cross from the right flank to freshman Taylor Dobles, whose first time shot sailed to the right of goal. The 13th minute saw the second big chance for the Tigers when junior Tinaya Alexander beat an Ole Miss defender in the box and shot from twelve yards out, with the ball going narrowly wide right.

Sophomore Mollee Swift was called into action for the first time in the 19th minute when she denied Channing Foster from eight yards out. Swift recorded her second save of the half in the 35th minute, comfortably collecting a shot from Haleigh Stackpole.

The Rebels started the second half quick, with a counterattack from an LSU corner leading to a three on two counterattack that was held up well by sophomore Maddie Moreau and junior Reese Moffatt before sophomore Maya Gordon deflected the shot for Swift to collect. Moments later, Noel shook off her defender in the box and had her shot saved by Rebels goalkeeper, Ashley Orkus.

Ole Miss scored the lone goal of the afternoon in the 58th minute. Haleigh Stackpole swung in a corner that was met by Holland at the far post and landed in the bottom right corner.

The Tigers had two big chances towards the end of the match. In the 82nd minute, Gordon attempted a curling shot for the far right corner that was collected by Orkus. The final opportunity for the Tigers came in the 87th minute, with Cooke’s shot from nine yards out deflecting into Orkus.

The Rebels narrowly outshot the Tigers by a margin of 13-12, with LSU earning six more corners than Ole Miss, 11-5. Freshman Jordan Johnson earned her first collegiate start, putting in 64 minutes from midfield. Senior Hannah Cuneo and sophomore Anna Rockett made their season debuts for the Purple & Gold, earning seven minutes as a substitute.

LSU will welcome Auburn to Baton Rouge for a Saturday night showdown (7 p.m.) on October 3 at LSU Soccer Stadium.