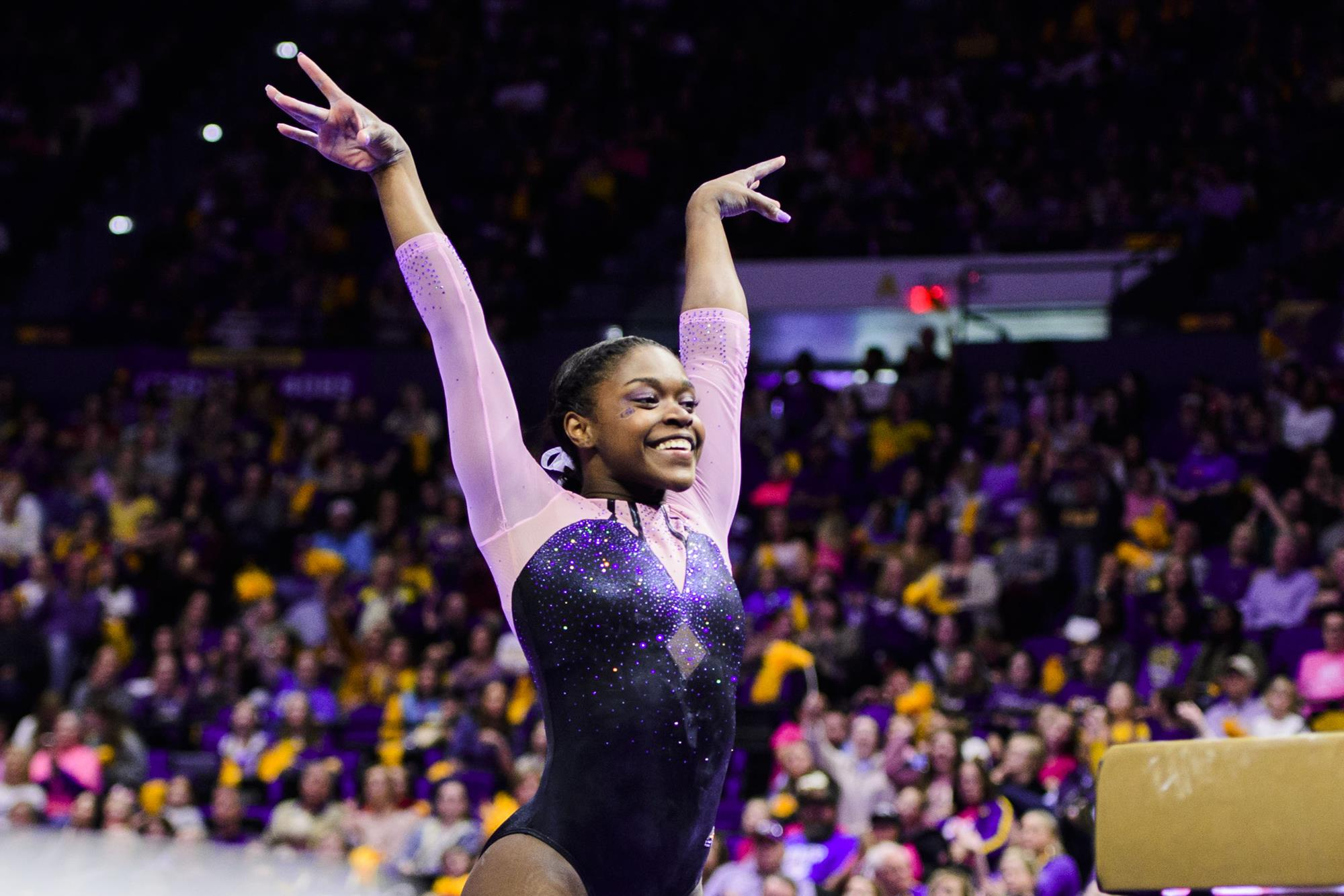 Some athletes walk in the door different than the rest. You can sense their greatness before it takes place. For LSU, freshman all-around gymnast Kiya Johnson is a prime example.

Committed to the Tigers since July of 2018, Johnson was captivated by the LSU gymnastics culture built under head coach D-D Breaux and couldn’t pass the opportunity up. In fact, Johnson was so eager to get to Baton Rouge that she graduated a year early at Coppell High School in her hometown of Dallas, Texas to enroll at LSU at just 17 years old.

“This was something that I wanted to do, coming to college early,” said Johnson. “I had to convince my parents. From the beginning, I was ready for it.”

The staff recognized the generational talent they were getting with Johnson’s pledge, but she has brought intangibles like self-confidence and maturity to campus that the coaches didn’t necessarily know she possessed at such a high level.

“We knew we were getting a special athlete,” said co-head coach Jay Clark of Johnson. “What we didn’t know was her maturity level, and the way she’s been able to be as consistent and conduct herself in such an even-keeled mindset, we had no way of knowing that. It’s been amazing so far to see her stay so steady in pressure packed situations.”

“I get my confidence from my teammates and my coaches,” Johnson said. “I see that they believe in me, so I try to believe in myself.”

Understandably, Clark says Johnson has yet to fully develop into a vocal leader, but she’s leading with her actions, which have been loud and clear so far this season.

“She’s leading by example. As we go, that role will increase,” Clark said. “To this point, she’s not our big vocal leader, but Kiya has definitely set the pace with the way she trains. She’s consistent with everything she does. There’s no doubt that everybody in the room would say they look to her in terms of the example to follow.”

For Johnson, the former two-time Junior Olympics national champion, it was the combination of many aspects that attracted her to LSU.

“It’s close to home. The family aspect. The coaches, the facilities, the team … everything about it,” said Johnson on her decision to come to LSU. “[Coach Breaux] was really nice on my visit.”

Johnson’s routines have become must-watch television, already earning SEC Freshman of the Week and SEC Gymnast of the Week honors in the month of January. Against Florida on Jan. 24, Johnson scored her first career perfect 10 on beam and a career-high 39.725 in the all-around. She remains the only freshman in the SEC to score a 10 this year. On floor, she’s matched her career-high of 9.975 for three consecutive meets. On Friday vs. Alabama, Johnson claimed another all-around title with a score of 39.600. For the season, Johnson’s all-around average of 39.49 ranks fifth nationally and first regionally. She also ranks second nationally in floor (9.96) and vault (9.92).

Freshman Kiya Johnson matched her career high with a 9.975! pic.twitter.com/C8EVKR8n0r

She’s been special, and there can never be too many reminders that she’s just 17 years old.

Given her youth and the unprecedented success she’s had so far, most of the tweets and headlines concerning Johnson begin with the cliché ‘freshman phenom’ catch phrase. She’s appreciative of the kind words, but Johnson is trying to block that out and not make it a distraction. Johnson prides herself on being a team player who’s always hungry for ways to improve.

“I look at [the praise on social media], obviously, and it’s really a big compliment and I appreciate that,” said Johnson. “But I try to not focus on that. I try to focus on being me and what I can do for my team because it’s not about me.”

The term ‘phenom’ often gets tossed around loosely, but through four weeks of the season, she’s lived up to every bit of that title, instantly becoming the face of attention at each meet.

Like many around the program know, the interest surrounding LSU gymnastics is unlike any other in the nation. The fanbase is fiercely loyal and passionate, and it shows in the attendance with each meet at the Maravich Center. Friday’s meet vs. Alabama marked the fifth-largest crowd in program history, and Johnson is still getting used to stepping out in front of 12,000 strong.

“Every time I run out there and see that many people, I’m like ‘Oh my god, there’s so many people looking,’ but I mean, it’s really fun,” Johnson said with a smile.

One of the main things that lured Johnson to Baton Rouge was the family atmosphere instilled within the program. As the future of LSU gymnastics, Johnson often relies on alumni and former greats like McKenna Kelley, Miya Hambrick and Sarah Finnegan for words of wisdom.

“I’m really close with a lot of the alumni. They are all so nice and willing to give advice, even when you don’t ask for it,” she said. “Committing here immediately puts you in this family.”

When Johnson goes through practice, there’s no nonsense. In fact, coach D-D Breaux compared Johnson’s focus and control to the qualities of Finnegan, who many consider to be the greatest gymnast in LSU history. Although she’s honored by the comparison, Johnson is just trying to be herself and not add any extra pressure.

For LSU, it’s time to hit the reset button after a tough month of January. But for Johnson, a new month means a new opportunity to elevate her craft to new heights.