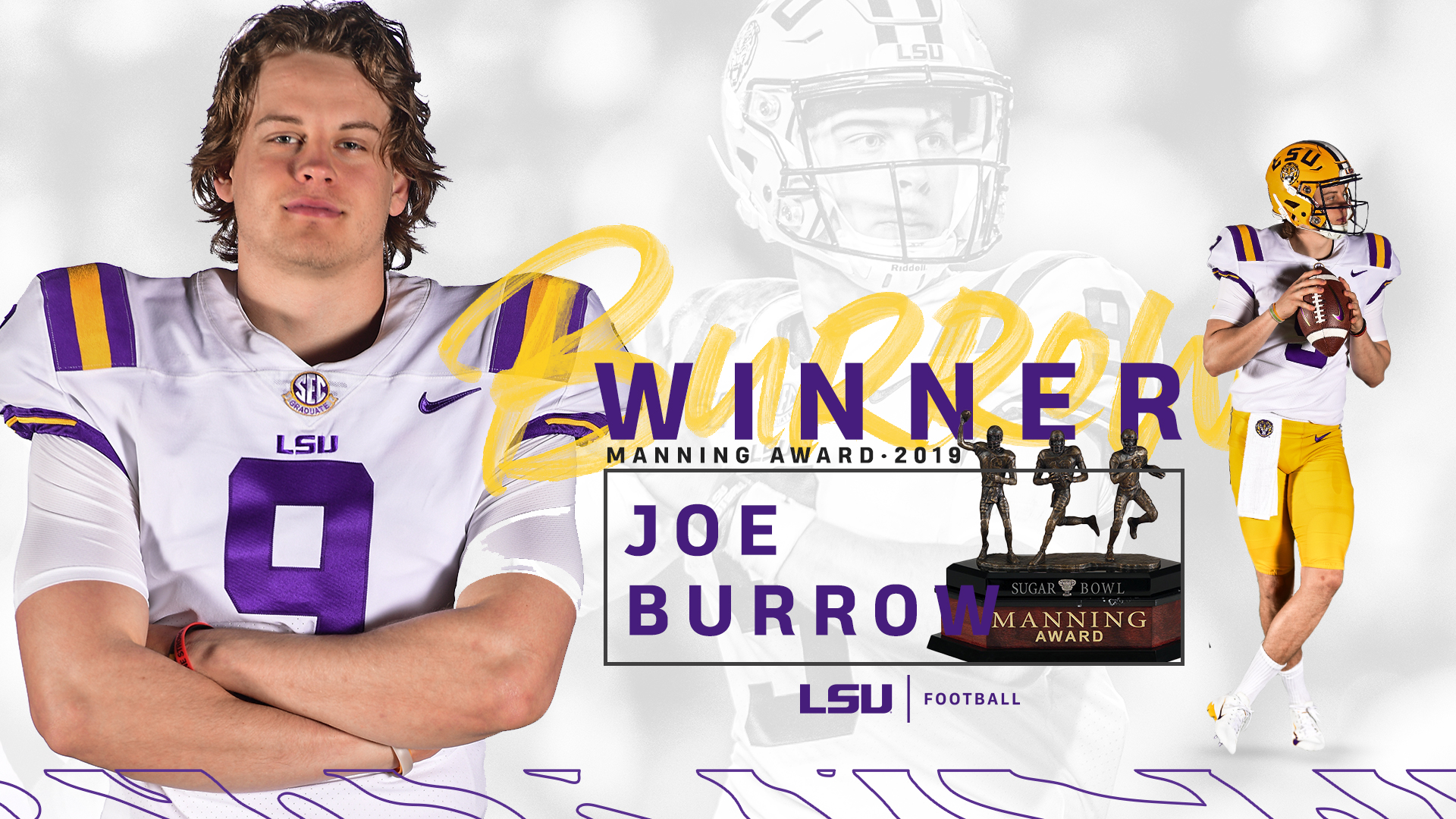 NEW ORLEANS – LSU star Joe Burrow has been selected as the 2019 winner of the Manning Award, presented by the Allstate Sugar Bowl to the top quarterback in the nation.

The Manning honor caps one of the most impressive seasons by a quarterback in college football history. The Manning Award, now in its 16th year, was created by the Allstate Sugar Bowl to honor the college football accomplishments of Archie, Peyton and Eli Manning. It is the only quarterback award that takes into consideration the candidates’ bowl performances in its balloting. The award is voted on by a panel of local and national media, as well as each of the Mannings.

“I’ve not sure we’ve ever seen a quarterback have the high level of sustained and consistent excellence against a very challenging schedule that Joe Burrow had this season,” said Archie Manning. “Week-in and week-out, he played elite-level football while leading his team to victory. He simply didn’t have an off-day all season-long, which is amazing. And then in the postseason, he managed to take his game to another level. It’s been a pleasure to watch Joe this year.

“On behalf of the entire Manning family, we would like to thank the Sugar Bowl Committee for its generous and ongoing support of the Manning Award. The Bowl’s role in making this award possible each year is greatly appreciated.”

Burrow, a native of Athens, Ohio, turned in what is arguably the best season ever for a collegiate quarterback in 2019. The senior set the NCAA FBS record with 60 touchdown passes while leading the nation with 5,671 passing yards and narrowly missing setting the FBS record for completion percentage – he finished at 76.3 percent as he completed 402 of 527 passes. More impressively, he led the Tigers to a perfect 15-0 season including a dominant 42-25 College Football Playoff (CFP) National Championship victory over defending champion Clemson. Burrow was named the Most Outstanding Player of the championship game after throwing for 463 yards and five touchdowns.

“The Allstate Sugar Bowl is proud to have the opportunity to recognize Joe Burrow as the winner of the 16th Manning Award,” said Judge Monique Morial, the president of the Sugar Bowl Committee. “He had one of the greatest seasons in college football history and it was with great pleasure that we watched him complete that season by winning the national championship right here in New Orleans. We look forward to welcoming him back to town later this spring for the official presentation of the Manning Award.”

In addition to the Manning Award, Burrow earned nearly every national honor possible – he won the Heisman Trophy, the AP National Player of the Year award, the Maxwell Award, the Walter Camp Award, the Davey O’Brien Award and the Johnny Unitas Award as well as being a unanimous First-Team All-American and the SEC Offensive Player of the Year.

Despite only playing two seasons at LSU after transferring from Ohio State, Burrow completely re-wrote the Tiger record books. He owns school career records for total yards (9,332), touchdown passes (76), completion percentage (.685), passing yards per game (305.9), 300-yard passing games (15), 400-yard passing games (4) and touchdowns responsible for (88: 12 rush, 76 pass). He finished his career having thrown for 300 yards in nine consecutive games and having completed 20 or more passes in 18 straight games, two more LSU records. His 5,671 passing yards this season are an LSU and an SEC record and are tied for the third-most in NCAA FBS history.

He also recorded one of the greatest postseason efforts in history while leading LSU to a 63-28 Playoff Semifinal win over Oklahoma and the championship game victory over Clemson. In the Playoff Semifinal, Burrow completed 29-of-39 passes for 493 yards and an SEC-record tying seven touchdowns while adding a rushing TD. His combined numbers for the two CFP games were 60-of-88 (.682) for 956 yards and 12 touchdowns, as well as a pair of rushing scores.

In its first 16 years, the Manning Award has recognized the top names in college football. It has honored quarterbacks from 12 different schools and from four different conferences. The Big 12 Conference (Kyler Murray, Baker Mayfield, Vince Young, Colt McCoy and Robert Griffin III) and the Southeastern Conference (Burrow, Johnny Manziel, Cam Newton, JaMarcus Russell and Tim Tebow) lead the way with five Manning Award honorees each, while and the Atlantic Coast Conference (Deshaun Watson twice, Matt Ryan and Jameis Winston) has had four Manning Award winners. LSU (Burrow and Russell) joins Oklahoma (Murray and Mayfield) and Texas (McCoy and Young) as the only schools with two different winners.

Statistically, the Manning Award has seen a wide-range of quarterbacks. Thirteen of the Manning Award men threw for over 3,000 yards in their winning campaign, including 4,000-yard seasons from Burrow, Griffin III, Marcus Mariota, Mayfield, Murray, Ryan, Watson (twice) and Winston. On the other hand, Manziel, Murray, Newton, Watson (in 2015) and Young were all 1,000-yard rushers during their Manning years.

Perhaps most impressive among the statistics of the quarterbacks recognized by the Manning Award is touchdowns scored. Eleven of the winners accounted for over 40 touchdowns during their successful seasons – Burrow’s 65 touchdowns (60 passing, five rushing) broke Mariota’s record (58 in 2014) for touchdowns by a Manning Award winner.

One of the more unique aspects of the Manning Award is the fact that it takes account of the quarterbacks’ bowl performances, in addition to the regular season. Thirteen of the 16 Manning Award winners won bowl games during the season they won the honor. Eleven Manning Award honorees led their teams to the CFP Semifinals or a BCS Championship game appearance (Burrow, Matt Leinart, Mariota, Mayfield, McCoy, Murray, Newton, Tebow, Watson, Winston and Young). Seven won national championships (Burrow, Leinart, Newton, Tebow, Watson, Winston and Young).

Previous Manning Award winners have also factored prominently in the NFL Draft as they all heard their names called on Draft Day. Five honorees were selected No. 1 overall (Mayfield, Murray, Newton, Russell and Winston), while four others went No. 2 or No. 3 (Griffin, Mariota, Ryan and Young). Burrow is expected to be a top pick in the 2020 NFL Draft.

All the Manning Award winners follow in the footsteps of the Mannings themselves. In college, Archie, Peyton and Eli Manning combined for over 25,000 passing yards and 201 touchdowns while playing in 10 bowl games and earning four bowl MVP awards. Archie was the No. 2 pick in the NFL Draft, while both Peyton and Eli were selected No. 1 overall.

In addition to the Manning Award’s yearly honor, each week during the regular season, eight quarterbacks are recognized as Manning Quarterbacks of the Week. Seventy-one players from 65 different schools were honored during the 2019 season.