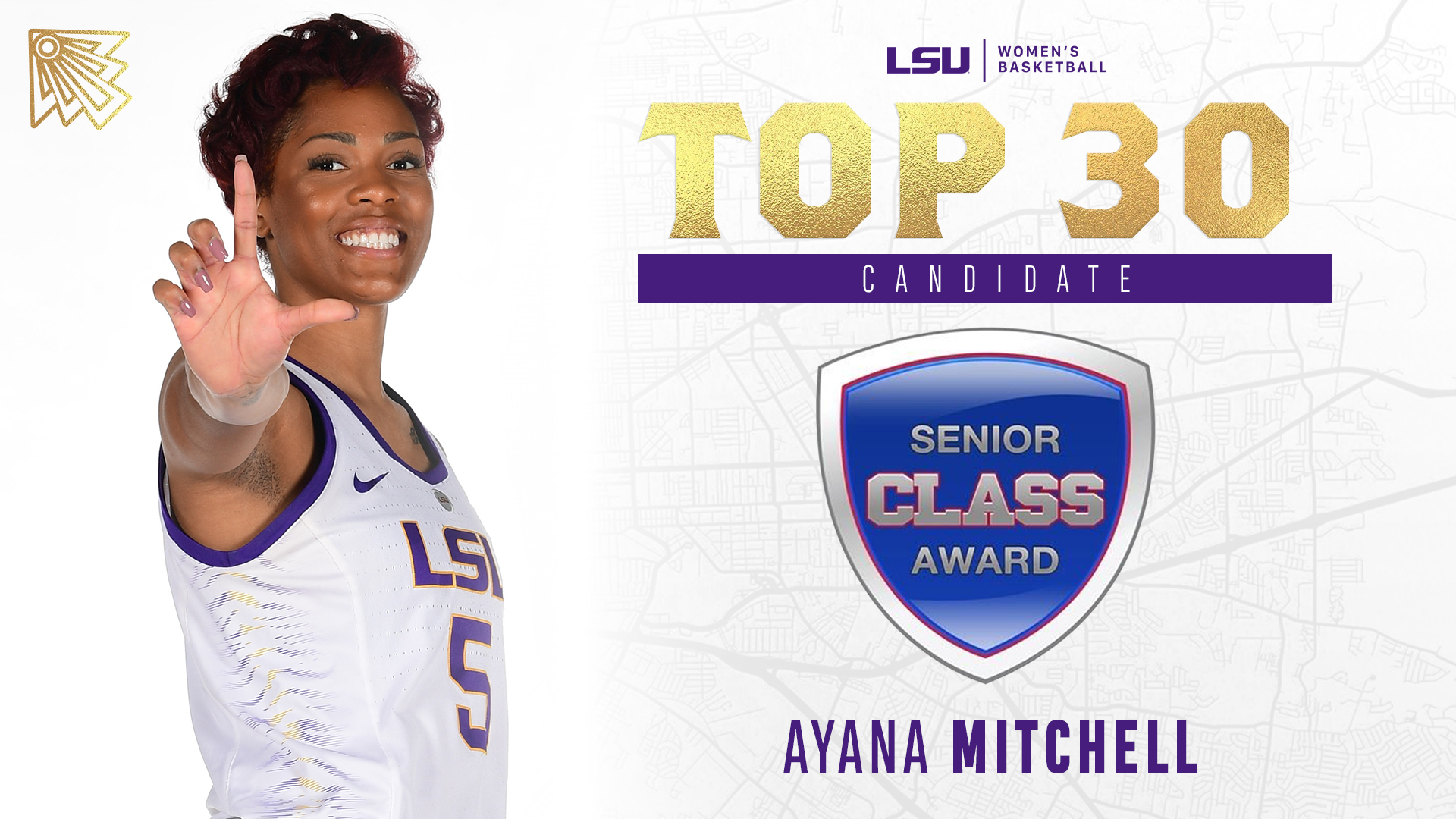 BATON ROUGE — LSU women’s basketball forward Ayana Mitchell has been announces as one of 30 candidates for the 2019-20 Senior CLASS Award®. The award honors student-athletes who excel both on and off the court, are seniors and have notable achievements in four areas of excellence: community, classroom, character and competition. Mitchell is the only SEC player on the list.

An acronym for Celebrating Loyalty and Achievement for Staying in School®, the Senior CLASS Award focuses on the total student-athlete and encourages students to use their platform in athletics to make a positive impact as leaders in their communities.

Mitchell currently leads the nation with a 72.1 field goal percentage and is 18th in the nation in double-doubles this season with eight, following last night’s 22 points and 12 rebounds performance against No. 10 Mississippi State. She is currently averaging 14.4 points and 9.2 rebounds per game and is on track to become just the fourth LSU Tiger to score 1,000 career points (1,232) and grab 1,000 career rebounds (881).

As a part of her leadership on the team, Mitchell has become very involved in the Baton Rouge community as well as back home in Conyers, Georgia. Over the past year she has worked with youth at Gardere Elementary School, Lighthouse Christian Fellowship Church and Brusly Middle School.  She also served as a counselor for the Pre-Scholars Academy, a three-week program in the summer that introduces incoming LSU students to the campus. She has also volunteered with the team at the Knock Knock Children’s Museum and the Greater Baton Rouge Food Bank.

Mitchell, in her second season as a team captain, was recognized in the Fall as one of the most improved student-athletes in the classroom by the staff of the Cox Communications Academic Center for Student-Athletes. She was also named to the athletics department’s 3.0 Honor Roll.

The list of candidates will be narrowed to a field of 10 finalists in February, and those names will be placed on the official ballot. Ballots will be distributed through a nationwide voting system to media, coaches and fans, who will select the honoree who best exemplifies excellence in the four C’s of community, classroom, character and competition. The Senior CLASS Award winner will be announced during the 2020 NCAA Women’s Final Four in New Orleans. For more information on each of the candidates, visit seniorCLASSaward.com.

LSU is one of four schools to have both men’s and women’s candidates as LSU’s Skylar Mays was named to the men’s Top 30 list earlier today. The other three schools are Lehigh, Seton Hall and Miami (Fla.).