For LSU, It's a Perfect Ending, and a Perfect Beginning, Too 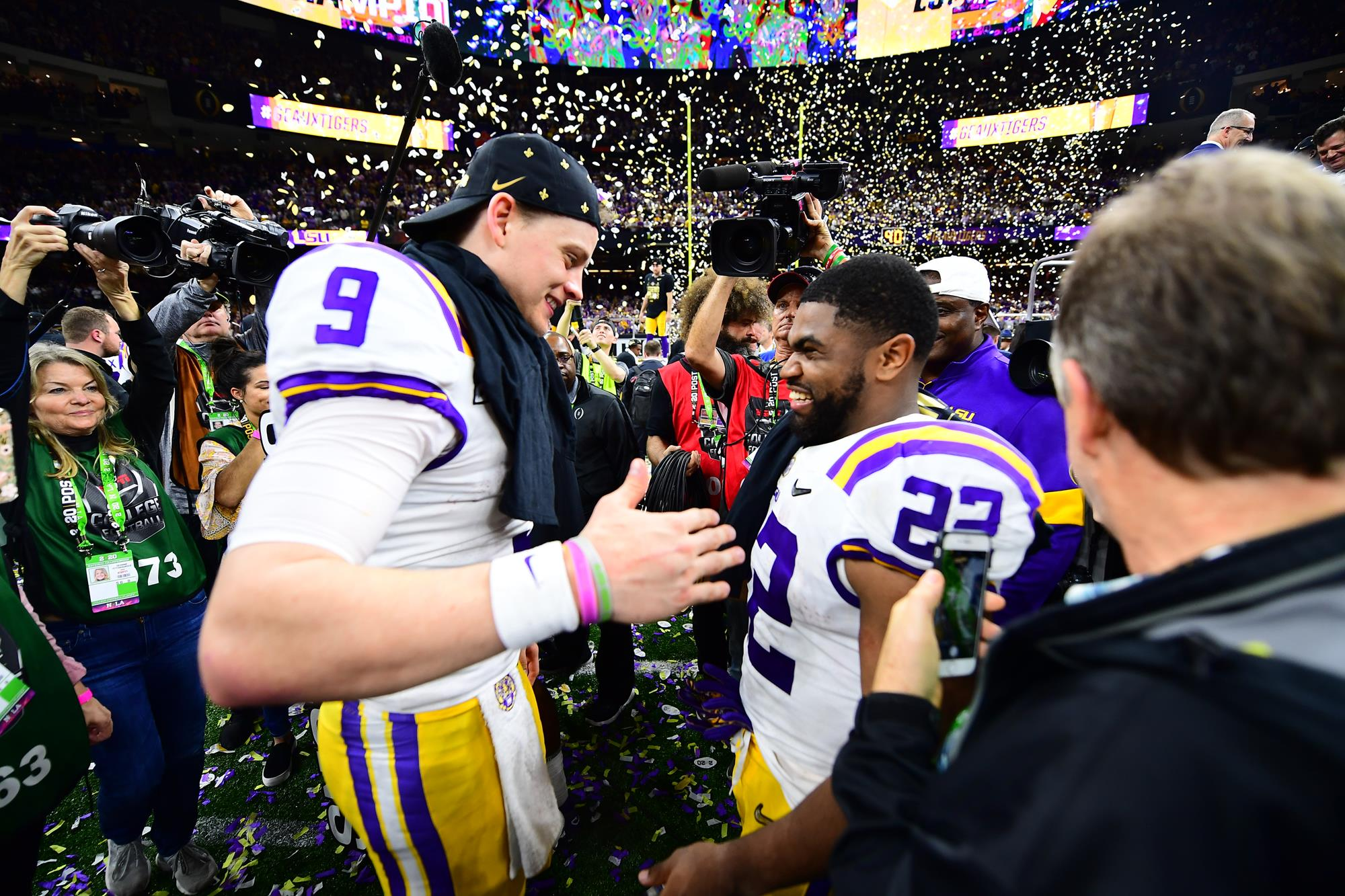 NEW ORLEANS – Joe Burrow smoked a victory cigar with a complementary victory dance. His teammates danced on the field, in the locker room, and in the end zone. His head coach sported a grin that stretched from Larose to Lake Charles, the pride of a state – his state – reflected on his face.

There’s only one way to complete a perfect season.

Give it a perfect ending.

LSU’s 42-25 win over Clemson Monday Night in the Superdome was a microcosm of its entire 2019 campaign: a team of blue-chip talents with chips on their shoulders fusing together to be better than the sum of its already-excellent parts.

It starts with Ed Orgeron, the tone-setter of the program who laid out a bold vision three years ago when he took the job and executed it to perfection. He learned from his mistakes. He surrounded himself with a talented staff. He recruited relentlessly, inspired constantly, and delivered undoubtedly.

There’s no denying Orgeron’s natural talent as a coach, just as there’s no doubting the talent of his team. Of course, that’s easy to say in hindsight, as he hoists the national championship trophy over his head, but the charisma, work ethic, and football knowledge were always there for Orgeron, even at previous head coaching stops that didn’t end in championship glory.

“You don’t know until you go through it, but adversity makes you stronger,” Orgeron says. “You may wonder what has happened; it don’t feel good. But when you look at, you figure it out, you know what, through that adversity, I grew. I changed. I got better here. I got better there.”

Through his 5-for-10, 37 yards, and zero touchdown opening Monday night, he looked more like the quarterback naysayers believed him to be when he failed to win the starting job at Ohio State in 2017 and the spring of 2018. Clemson defensive coordinator Brent Venables threw unexpected blitzes and coverages LSU’s way, and the entire offense struggled early to adjust.

Sometimes, it takes a hit to spark Burrow. Sometimes, a mistake.

Other times, the stage demands it, and Burrow complies.

He complied Monday, finishing 31-of-49 for 463 yards and five touchdowns passing, while adding another 58 yards and a score on the ground.

“We feel like you can’t hold us down forever,” Burrow says. “I think we’re too explosive. Our coaches are too good, our players are too good, our O-line is too good. They had a great plan coming in, like I said. Coach Venables is great at what he does, it just took us a while to get it figured out.

Like Orgeron as a coach, it took Burrow a while to figure it out as a player. Maybe each needed the other – Orgeron, a program-defining quarterback with relentless tenacity, endless work ethic, and linebacker toughness; Burrow, a coach with the trust to give him the keys to an offense and the humility and foresight to make that offense as modern and unstoppable as possible.

In some ways, they couldn’t be more different – Burrow, a Midwestern introvert who prefers grilled chicken salads and video games, and Orgeron, a bayou-bred south Louisianan who likes boiled eggs in his gumbo and could recruit a house cat into a cold tub.

In other ways, they’re mirror images of each other.

That shared mentality became contagious with the team, which was already full of willing recipients. Clyde Edwards-Helaire and Burrow bonded instantly – and not over their hobbies.

“I have no idea,” Edwards-Helaire says of his fast friendship with Burrow. “It was this big instant connection which is very, very unusual as far as us not having the same background at all. We don’t do the same things. I go hunt, and Joe does his little thing that he does. When he got on campus man, it was just an instant bond, instant connection. And when you have a connection with somebody off the field, once you get on the field, it’s like second nature.”

The same could be said of Justin Jefferson – like Edwards-Helaire, an overlooked high school recruit who became a legendary LSU Tiger – or Lloyd Cushenberry and Damien Lewis on the line. On defense, look no further than JaCoby Stevens, a five-star who fell out of love with football after multiple position changes but stuck around to regain his passion for the sport. Stevens, who predicted to his dad as a high school senior that he would win a national championship as a junior at LSU, stuck it out, in part because of his coaches’ inspiration.

“I was in love with football. I mean, football was my everything,” he says. “My low point was when I fell out of love football, I was ready to give it up. But I couldn’t. I found my love again. And I’m here now.”

Rashard Lawrence overcame multiple injuries in his career to fulfil a promise Orgeron made to him as a recruit. Then, Orgeron was LSU’s defensive line coach, and he promised Lawrence would be a team captain on a national championship team.

“I think about multiple ankle injuries, a knee surgery, not being able to be out there with my brothers grinding in the spring and just in time getting ready for the season,” he says. “Man it was tough. But I kept working. We kept working.”

Kristian Fulton, too, felt rock bottom after his freshman season, when the NCAA suspended him for two years for tampering with a drug test. Fulton stuck it out, eventually had his suspension reduced to a single season, and, after an All-American junior season, came back to finish his career with a title in his hometown.

“To be honest, the day that I met with Coach O about returning to school last season, I was walking through the hallways and I just saw pictures of the team that took pictures in New Orleans in the Superdome,” Fulton says. “And that’s what I realized, that’s what I was coming back for.”

A team with a head coach who works his tail off and executes a bold vision has a shot. A team with a quarterback exactly like that has a really good shot. But a team whose roster is filled with overlooked underdogs with something to prove?

It’s a recipe for perfection.

Consider it proven. LSU will surely go down as one of the best teams of all-time, and many will argue none is better. Those arguments are for another day, and it’s not like Orgeron doesn’t plan to return to this stage as soon as possible.

“Honestly, I don’t feel like Coach O is satisfied,” Stevens says. “Of course he’s happy he just won a national championship. He went 15-0, he’s the head coach of the number one team, but I think deep down inside Coach O wants more. I don’t think he’s done.”

Orgeron finished his press conference by reflecting on the past and projecting to the future. He laughs about how the things he used to get made fun of for – his unique accent, his motivational self-punches to the jaw, his fire and his fight – are now things people love about it.

He’s not joking, however, about what’s next. Monday night was about victory cigars and celebratory dances, and the days to come will contain much internal joy over the win and external conjecture over its impact on LSU’s legacy.

But even with a title, a trophy, and a place in history, the Tigers are still coming.

And they have no plans to back down any time soon.

“Everything fell into place, and we’re just getting started,” Orgeorn says. “This is not the finish. I want to be here at LSU for a long time and win many a championships at LSU, and this is just the beginning.”