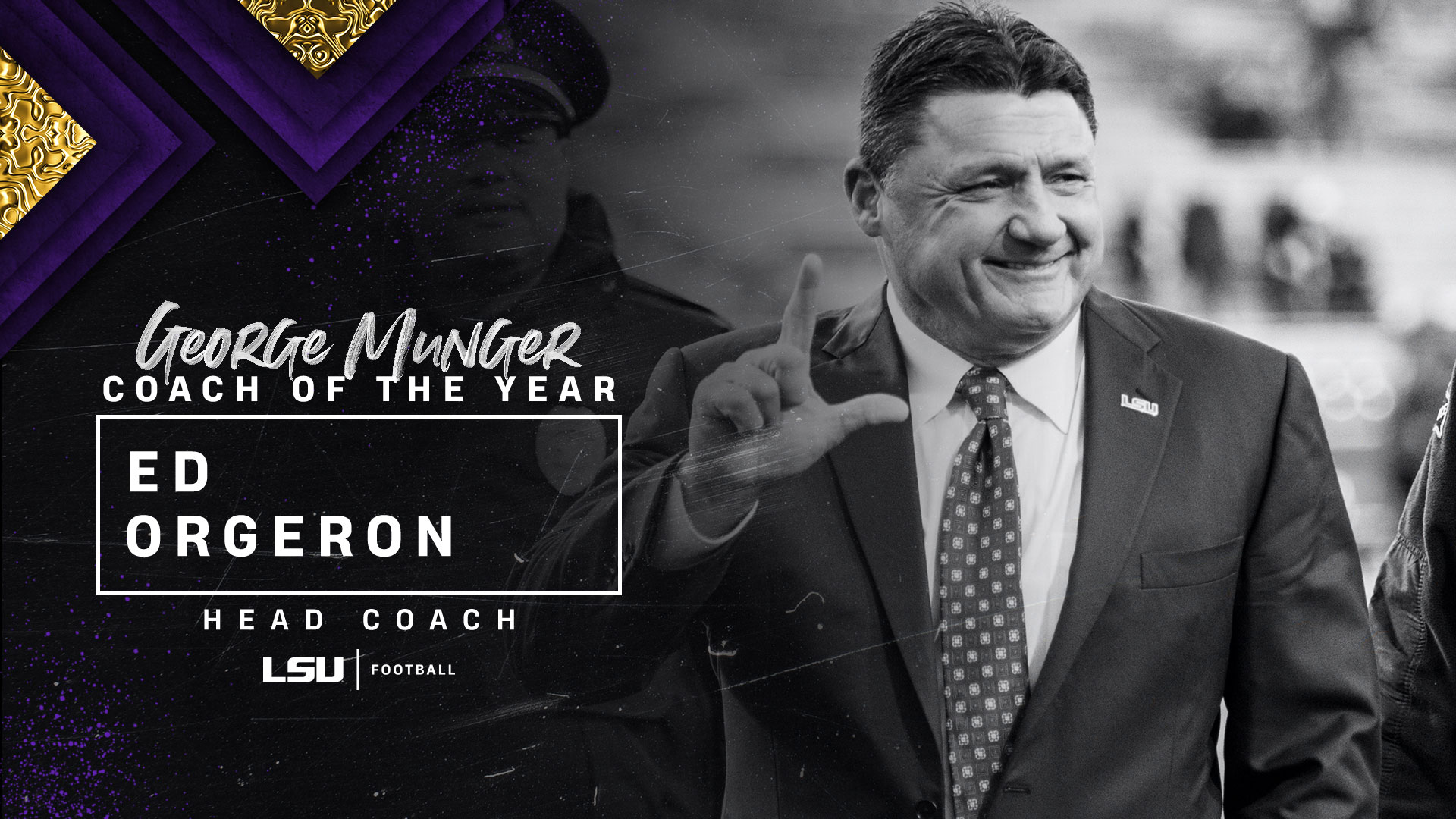 The Maxwell Football Club announced that LSU’s Ed Orgeron has been selected as the 2019 George Munger Collegiate Coach of the Year Award winner. Orgeron has led LSU to a 14-0 record, a College Football Playoff berth and the SEC Championship. The No. 1 Tigers defeated No. 4 Oklahoma, 63-28, in the playoff semifinal and will face off with Clemson in the National Championship game on Jan. 13.

In his four years, as an interim coach first and three years as the head coach, Orgeron has posted a 38-9 record with the Tigers, including an astonishing 9-1 record against Top 10 opponents over the last two years.

Maxwell Football Club Executive Director Mark Wolpert commented, “Coach Orgeron has engineered a historic season for the LSU football program. The team’s record-setting 14-0 mark is a great testament to the hard work of Coach and his staff, and also to the dedication shown by the student-athletes involved in the program.”

Orgeron will be honored Friday, March 6, 2020 at the 83rd Maxwell Club National Awards Gala which will be held at the Tropicana Casino Resort in Atlantic City, N.J. Also receiving awards at this event will be LSU’s Joe Burrow (Maxwell Award) and Ohio State’s Chase Young (Chuck Bednarik Award), The Club will be announcing additional winners of professional awards and special awards during the upcoming weeks.

Tickets for the Maxwell Football Club National Awards Gala are available for purchase on the Club’s website or by calling 215-643-3833.

About the Maxwell Football Club
The Maxwell Football Club (MFC) was founded in 1935 and is a registered 501c3 Non-Profit Corporation. The MFC promotes and recognizes excellence at all levels of football from youth leagues through the professional ranks. Each year the MFC offers programs which focus on player and coach development, safety, and player wellness. The Club also presents many of the premiere awards in the football world each year. Membership is open and additional information on the Club can be found at www.maxwellfootballclub.org.

The Maxwell, Bednarik and Munger Awards are members of the National College Football Awards Association (NCFAA), which encompasses the most prestigious awards in college football. Founded in 1997, the NCFAA and its 25 awards now boast over 800 recipients, dating to 1935. Visit ncfaa.org to learn more about the association.