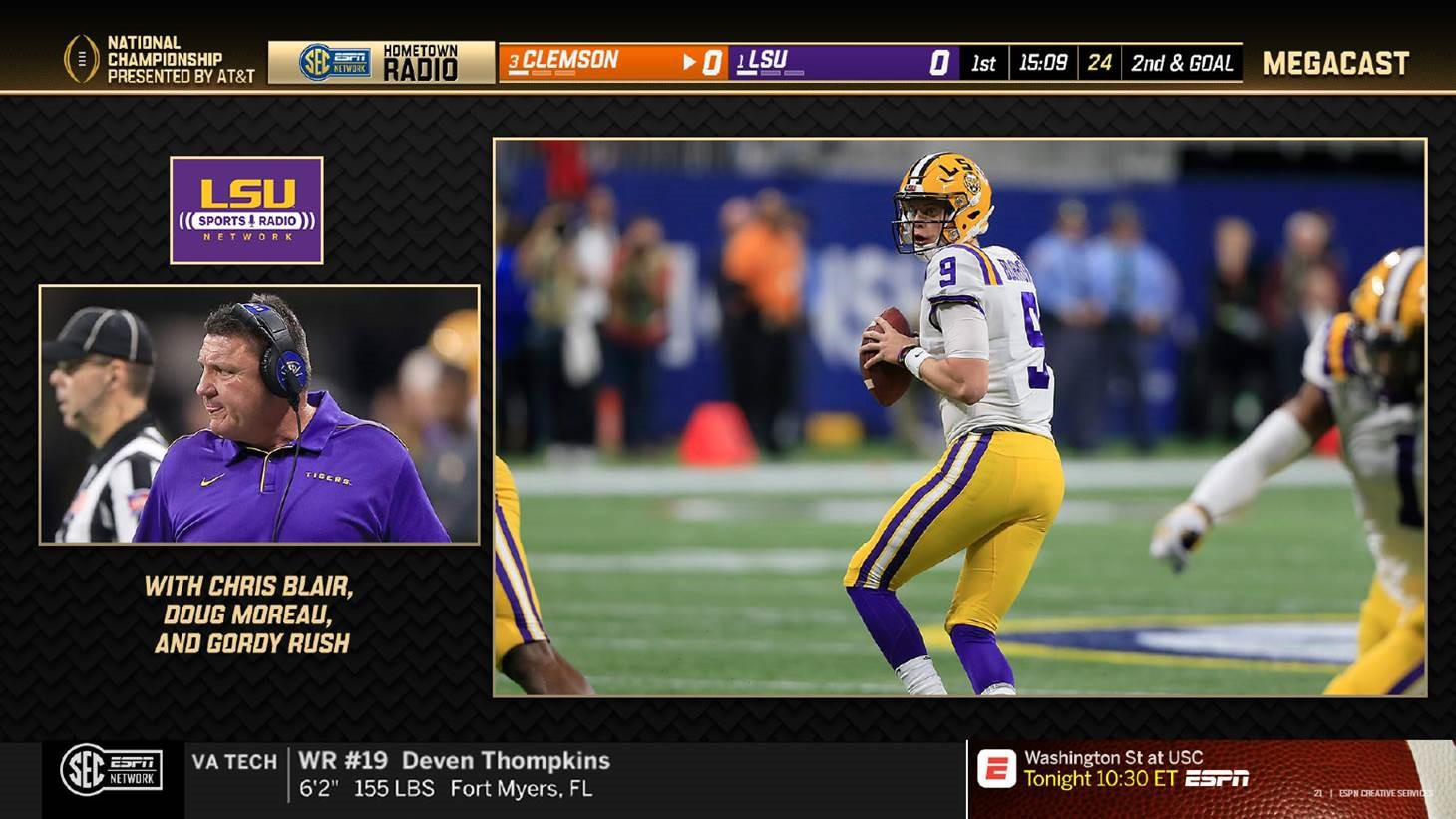 For the sixth consecutive year, the College Football Playoff National Championship will be showcased through state-of-the-art technology on ESPN, with the network’s best innovation deployed for the presentation of No. 1 LSU vs. No. 3 Clemson on Monday, Jan. 13, at 7:15 p.m. CT.

ESPN’s main telecast will headline the MegaCast production, as ESPN offers 15 total presentations of the CFP National Championship across its television networks and the ESPN App. College football’s dramatic finale from the Mercedes-Benz Superdome in New Orleans will be available in more than 160 countries via ESPN’s networks and streaming platforms.

ESPN’s Main Telecast is a Showcase of Innovation
The Superdome will be the hub of ESPN’s innovation on Championship Monday, including approximately 100 cameras providing every angle of college football’s biggest night. State-of-the-art technology includes:

ESPN’s camera arsenal will include dedicated cameras on LSU head coach Ed Orgeron and Clemson head coach Dabo Swinney at all times, as well as unique camera placements providing views of the teams as enter the playing field.  The Goodyear Blimp will provide aerial shots of New Orleans and the Superdome.

More than 100 microphones will be placed throughout the Superdome, capturing the sounds of the game and atmosphere of the crowd, enhancing the game telecast.

“The College Football Playoff National Championship is the pinnacle of our college football season,” said senior vice president of production Lee Fitting. “This one telecast is a blend of our best technology and innovation, providing viewers an experience that is befitting to the magnitude of the game. I couldn’t be more proud of our entire team’s work, from commentators to reporters, producers, technical staff, operations and more, in preparing to showcase the game to the world.”

Chris Fowler and Kirk Herbstreit Call Sixth National Championship as Duo; Tom Rinaldi Reports on LSU, Maria Taylor on Clemson
Chris Fowler and Kirk Herbstreit will call their sixth CFP National Championship as a duo, as their 24th college football season together rises to a crescendo. Intrepid reporters Tom Rinaldi (LSU) and Maria Taylor (Clemson) will provide news and insight from the sidelines, as Rinaldi works his sixth CFP National Championship and Taylor adds a third national championship to her growing portfolio of work. Current ESPN rules analyst Bill Lemonnier will be in the booth with Herbstreit and Fowler. The former Big Ten referee is a veteran of several marquee assignments, including a number of prestigious bowl games.

For Herbstreit, who has been honored with a Sports Emmy for Outstanding Event Analyst, this CFP marks his 11th overall college football national championship.

Field Pass
Free-flowing commentary of the game, anchored by Adam Amin and Steve Levy, who will roam the sidelines of the Superdome. Multiple guests will join Amin and Levy throughout the telecast, including college football analysts Pat McAfee and Dan Orlovsky. Field Pass will once again be offered as an alternate pregame show, also on ESPN2.  Thanks to Samsung QLED, Field Pass will be available in 4K on DIRECTV, Comcast and Altice.

Coaches Film Room
Follow every play of LSU-Clemson through the minds of those who live and breathe the game every day. Participating coaches will be announced later this week

Command Center
Multi-angle presentation, which includes up to four different vantage points at any one time, with statistics and real-time drive charts supplementing the game action.

This MegaCast feed is presented in conjunction with the LSU Sports Radio Network and the Clemson Tigers Network.

Sounds of the Game
Allows viewers to imagine themselves inside the Superdome, as the game presentation will feature all the natural audio from the stadium, including the band performances.

Skycast
The popular view from above the action and behind the offense on most plays. New this year, replays will be shown regularly throughout the presentation.
Similar to Field Pass, the Skycam viewing option will also be available in 4K thanks to Samsung QLED

All-22
Watch the game the same way players and coaches study film, with a vantage point high above the field of play. The angle allows for the 22 players on the field to be seen at all times, providing the ability to distinguish how plays develop.

Techcast
An array of ESPN camera angles all on one screen, as viewers can enjoy as many as 12 angles of game play simultaneously.

Spanish-Language Call
The Spanish-language call of the game will be available on ESPN Deportes, with Eduardo Varela, Pablo Viruega, and Raul Allegre.

ESPN Blankets the Big Easy
ESPN will begin live productions from New Orleans on Friday, Jan. 10, with shows originating from multiple sets inside Jax Brewery before shifting to the Superdome prior to the game on Monday, Jan. 13.