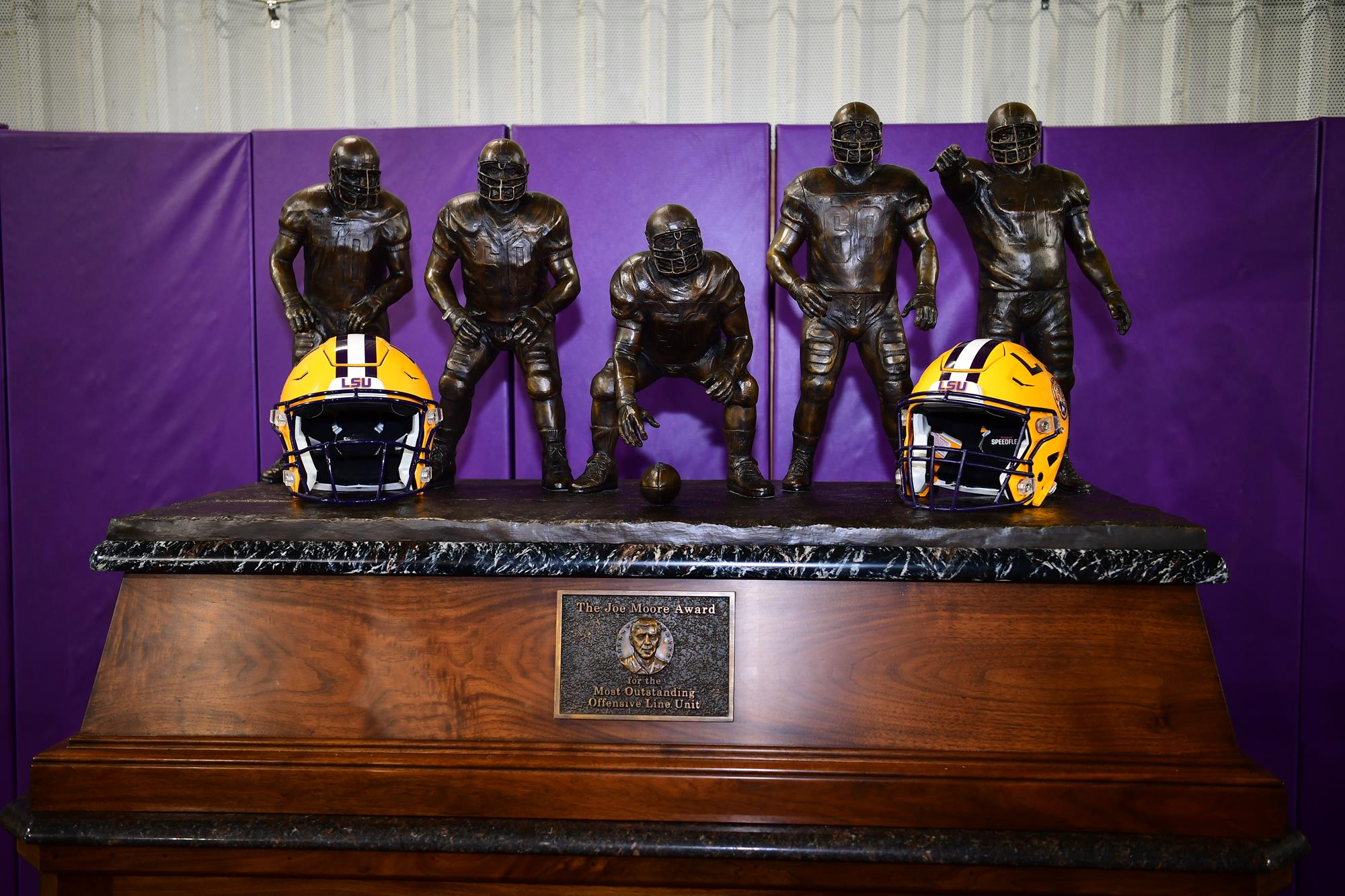 BATON ROUGE – LSU’s offensive line, anchored by junior Lloyd Cushenberry and senior Damien Lewis and coached by James Cregg, has been named the winner of the 2019 Joe Moore Award as the most outstanding offensive line unit in college football, the organization announced on Thursday.

Aaron Taylor, co-founder of the award and CBS Sports analyst, along with SEC Network analyst Cole Cubelic presented the trophy to the Tigers following practice on Thursday morning.

LSU is the second team from the Southeastern Conference to win the award since its inception in 2015.

The Joe Moore Award trophy, crafted by award winning sports sculptor Jerry McKenna, is the largest trophy in college football, standing at a height of almost seven feet and weighing in at over 800 pounds. It will be displayed on the LSU campus until the conclusion of the 2020 college football season.

“In an unprecedented recognition of physicality in pass protection, Coach Cregg’s unit separated itself in the eyes of the voters by their effort and strain in the run game, and by how consistently they demonstrated that pass protection is not passive,” said Taylor, who played guard and tackle at the University of Notre Dame for the Award’s namesake, the legendary offensive line coach Joe Moore.

“All of this year’s finalists displayed the award criteria in impressive fashion, but LSU made a statement by how well they played together as a group and brought physicality to everything they did,” said Randy Cross, three-time All-Pro with the San Francisco 49ers, College Football Hall of Famer, CBS college football analyst, and JMA voting committee member. “LSU showed a tone-setting attitude in both pass protection and in their run blocking that really caught the attention of the 200 plus member voting body that has collectively played and coached this position for well over 800 years.”

“The O-line position is extremely difficult to evaluate, especially when doing so for entire units with different offenses and styles of play,” said Cubelic, Chairman of the Joe Moore Award voting committee.

“That’s why we thoroughly go through each of the finalists’ season-long highlight reels and multiple back-to-back quarters of game film. The focus on the film study is the only way the voting body can properly and credibly evaluate the nuances of the award criteria that would otherwise be difficult to see.”

What Voters Said
“There is a tendency to hyper-focus on the rushing attacks and the run-blocking of these units, but LSU forced us to really alter our filters and do a deeper dive. They were solid against the run, but their ability to handle protection duties against SEC rushers with so many receivers out in routes was really impressive and one of the reasons QB Joe Burrow won the Heisman. It’s not THE reason, but it’s definitely one of them.”

“It’s incredible how often and how well they pass block in “empty” protection (no TE or RB help). There are plays all season, including the SEC Championship game where they are blocking 6, 7, 8, 10 seconds while Burrow looks to throw downfield. Great awareness in pass pro and often look for work and pick up delayed rushers. Appear willing to happily serve up some “full slabs” by rearranging an unsuspecting D-lineman’s rib cage in slide protection. Very physical bunch.”

“Passing as much as this offense did this year puts a unique strain on the group up front and boy did they respond. Sitting and watching these guys on film, the number of pass protection reps that I wrote down ‘Teach Tape Worthy’ next to in my notes was remarkable. Pass pro is definitely not passive for these guys.”

“They define what the teamwork criteria is about. They really worked well together in their combination blocks and in pass pro. Always a lot of [defenders] on the ground when the play was over. Played to the echo of the whistle on a regular.”

“Very efficient in both run game and protection. I thought they played with the most physicality. Borderline violent at times. All of the finalists were tough and physical, but it seemed like LSU was particularly prickly when given the chance.”

Evaluations were made through weekly review of actual game film and offensive line coach-provided cut-ups on the DragonFly Division I Network. In addition, Stats Perform, the industry’s leader in sports data analytics, provides advanced O-line data and analytics to give context and clarity, and to help streamline the film evaluation process. The voting committee also went through each of the finalists’ season-long highlight reels and multiple back-to-back quarters of game film.

The 13-member Joe Moore Award voting committee selected a midseason honor roll in October 2019, followed by selection of semifinalists in November and finalists in early December. After the regular season, a voting body of 200-plus members selected the 2019 winner of the Joe Moore Award. This voting body includes all of the current offensive line coaches at the Division I/FBS level, as well as former players, coaches, colleagues of Coach Joe Moore, select and qualified media members, and the Joe Moore Award voting committee. (Note: In an effort to avoid conflicts of interest, Chairman of the voting committee, Cole Cubelic, and co-founder, Aaron Taylor, abstain from voting).

Voting Committee
The Joe Moore Award voting committee comprises individuals who are highly knowledgeable about offensive line play, including former linemen, coaches, talent evaluators and media analysts. This group conducts in-depth analysis by reviewing game tape every week of the season to assess both the fundamentals and subtleties of overall O-line performance.

About the Joe Moore Award
The Joe Moore Award is the only accolade in college football to honor a position group. It is named after Joe Moore, widely regarded as one of the best offensive line coaches in college football history, most notably for his work at Notre Dame and the University of Pittsburgh. Coach Moore sent 52 players on to the NFL, including Bill Fralic, Mark May, Russ Grimm, Jimbo Covert and others.

Joe Moore Award Credo
Teamwork. It’s what defines football as a sport and it is displayed in its greatest glory – in its most profound necessity – in the play of the offensive line. For it is there that individual achievement only matters if the entire unit is performing. When we execute together, great things happen. But if one player missteps, the rest of the team pays the price. That idea – along with hard work and the willingness to strive to be your best – embodies what Coach Joe Moore instilled in his players.
But it’s about more than just football. It’s about how we live our lives, how we contribute to society, how we participate in the realization of great things. Teamwork is a bond. It’s a promise. And it’s a commitment to put the greater good above ourselves. It’s the greatest form of individual achievement because it requires total sacrifice – of focus, of effort, of ego. The road to success requires a universal commitment to purpose that creates an unbreakable bond between each of us. And it makes that success one of the greatest achievements on the planet.