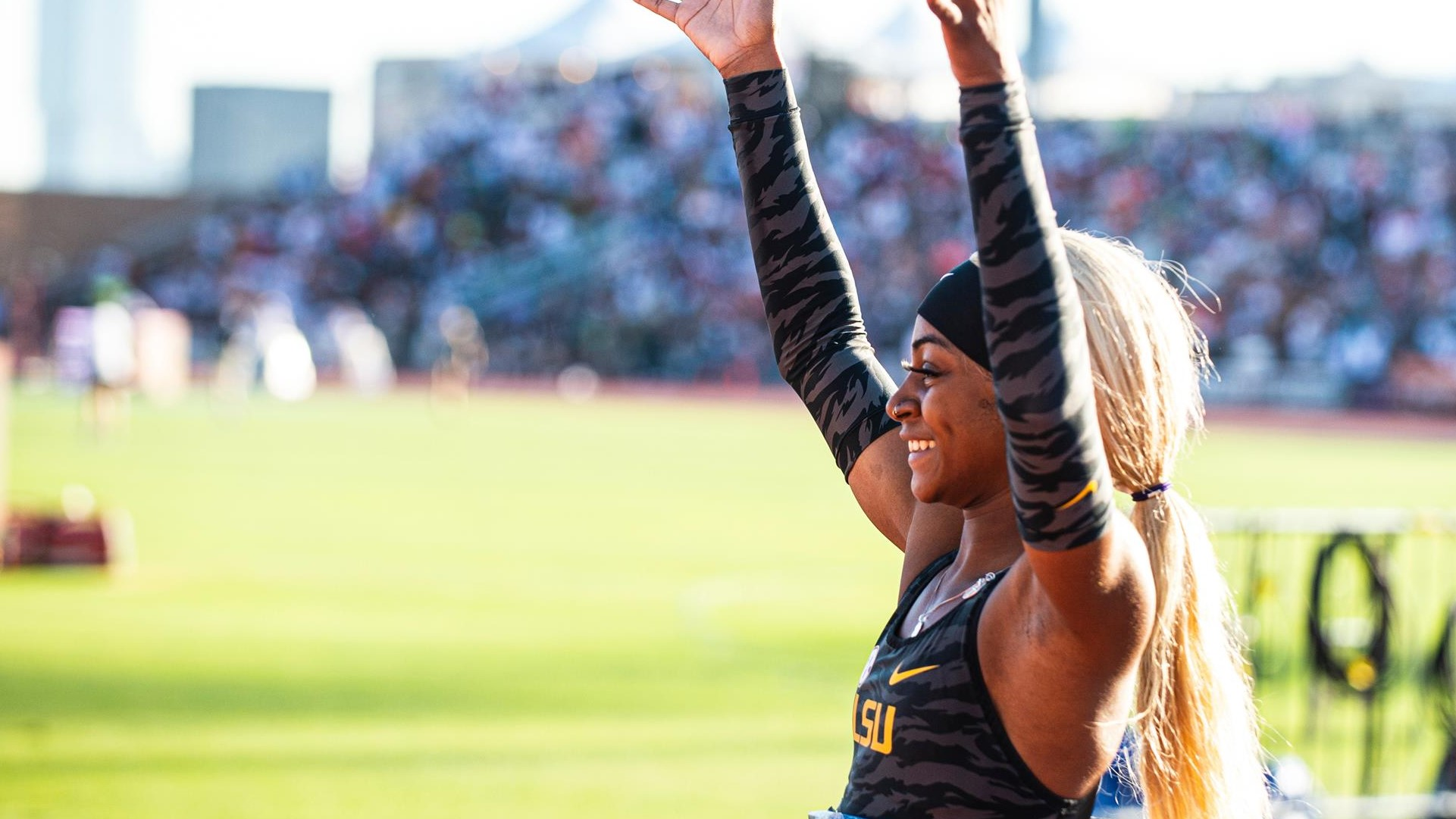 Richardson took the track and field world by storm with her awe-inspiring performances throughout the season that culminated with her running a 10.75 in the 100 meters to claim an NCAA title and set the collegiate record in her home state of Texas in June. Richardson, the U20 world record holder in the 100 meters and 200 meters, led the LSU women to a third-place team finish at the 2019 NCAA Outdoor Championships by accumulating 20 points (10 in the 100, 8 in the 200, and 2 in the 4×100 meter relay) to earn High Point Scorer of the Meet honors. She became the first freshman runner in SEC history to sweep the 100 meters, the 200 meters, and run on a winning 4×100 meter relay squad at the conference outdoor meet. Richardson is a finalist alongside Yanis David (Florida) and Janeek Brown (Arkansas).

She opened up the season with a win in the 60 meters at her first collegiate meet, the UAB Vulcan Invitational (Jan. 12), clocking a PR of 7.23 seconds to rank just outside of the LSU top 10 all-time.

Welcome to the SHOW @itskerrii ??

Richardson clocks an NCAA leading 7.23 in the 60 meters to win her first collegiate title!

It was two weeks later when Richardson ran a career best of 7.20 seconds in the 60 meter dash to etch her name in the LSU record books at the No. 9 slot. Richardson continued performances in the 7.2s in the 60 throughout the rest of the indoor season and she qualified for both the 60 meters and 200 meters at the NCAA Indoor Championships. She placed seventh in the finals of the 60 meters with a time of 7.27 and took ninth in the 200 meters (23.27).

She eased into outdoor season by anchoring LSU’s 4×100 meter relay to a win at the Louisiana Classics on March 16, and then she had an unforgettable showing at the Texas Relays. Running in her home state, Richardson won the 100 meters with a wind-aided time of 10.91 (+4.3) and she took home the 4×100 meter relay title for LSU with a chase down of epic fashion on the back straightaway.

From there, she won two titles at the Miami Hurricane Invitational in the 200 meters and 4×100 meter relay before competing at the LSU Alumni Gold (April 20) and the LSU Invitational (April 27). Her performance at the LSU Invitational, wins in the 100, 200 and 4×1, mirrored exactly what she would do two weeks later at the SEC Championships. In Fayetteville, she had an action-packed Saturday that required her to be at peak performance. First, she chased down Arkansas’ anchor to help LSU win its fourth-straight SEC title in the 4×100 meter relay with a time of 42.93. A little over an hour later she ran a windy time of 11.00 in the 100 meters to win her first ever SEC individual title in convincing fashion, and to cap off her night, she ran a PR of 22.57 in the 200 meters an hour later to complete the sweep. She became the first freshman in SEC history to win the 100 meters, 200 meters and run on a winning 4×100 relay squad.

Sha’Carri becomes the third freshman in LSU history to win the SEC 100 meter title! She joins Peta-Gaye Dowdie (1997) and Muna Lee (2001) as the three LSU women to achieve the feat!#GeauxTigers pic.twitter.com/YXh3wLjxI2

At the national meet, she scored 20 of LSU’s 43 points with a win in the 100 meters and silver in the 200  and 4×100 meter relay to claim High Point Scorer of the Meet honors. Richardson set the collegiate record in the finals of the 100 meters at the NCAA Championships when she ran 10.75. In the 200 meters, she clocked a 22.17 to take silver. Both of those times are U20 world records  and the 10.75 was the ninth fastest in world history. She went a perfect 10-0 in her 100-meter races in 2019 against collegians including an unblemished 5-0 in finals.

Richardson turned professional on June 12 and signed a contract with Nike. She made her pro debut on June 30 at the Prefontaine Classic and finished fourth in the 100 meters. She made the finals of the 100 meters at the USA Championships in late July to close out her 2019 season.