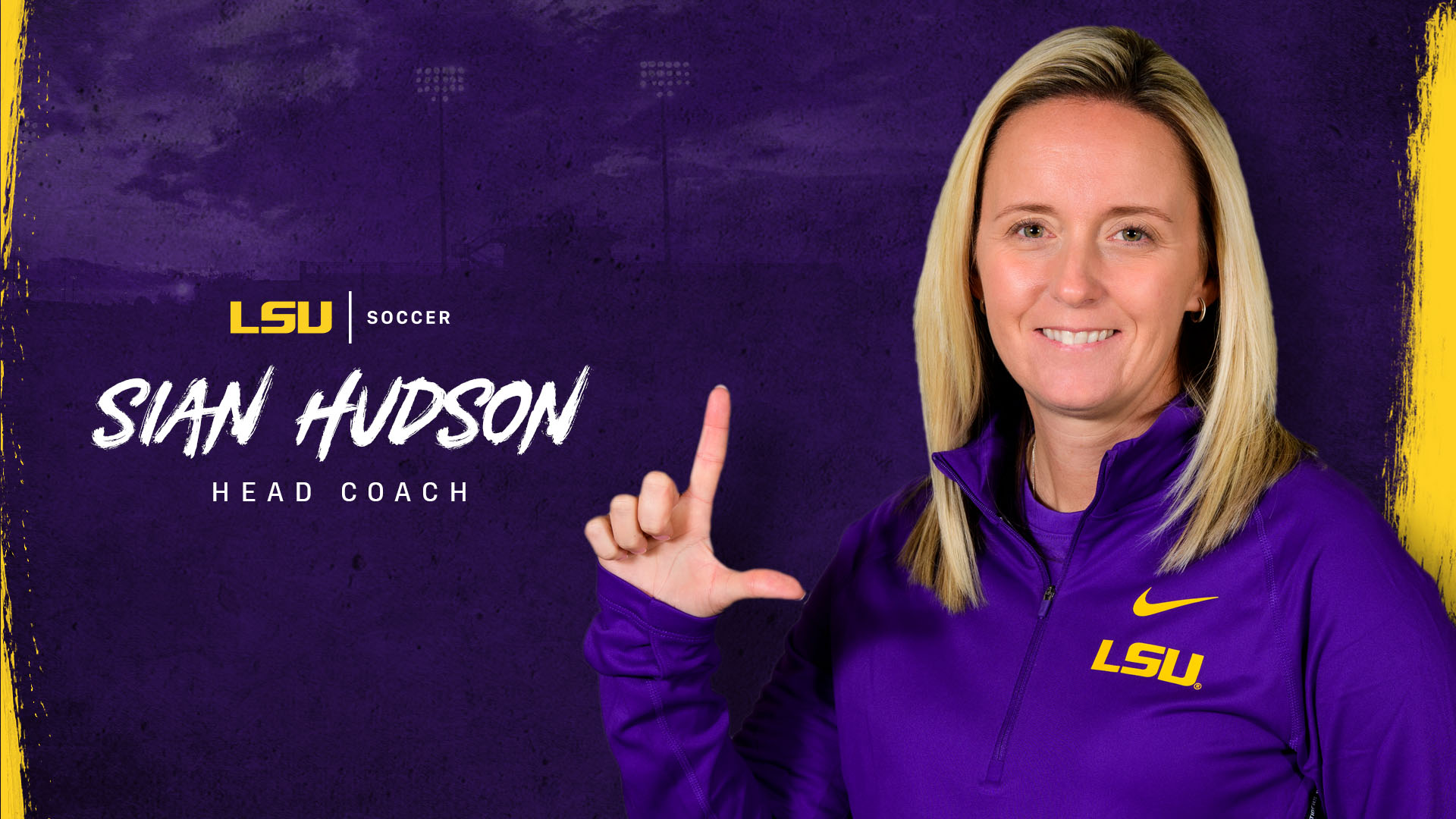 “We are very excited to welcome Sian to LSU,” said Woodward. “She brings with her tremendous success as a head coach and a reputation for recruiting top talent from across the country. She’s going to build a culture of excellence on and off the pitch here at LSU.”

A coach with nearly 20 years of coaching experience, Hudson comes to Baton Rouge after serving as the head coach at the University of Colorado at Colorado Springs for the past three seasons. During her time as head coach, Hudson led the Mountain Lions to a 52-10-4 record. Each of those three seasons saw UCCS qualify for the NCAA Tournament, the first three appearances in school history, including a run to the national semifinals in 2017. Her win totals in each of the three seasons – 17 in 2017, 16 in 2018, and 19 in 2019 – were the three winningest seasons in program history.

“I’m incredibly thankful to Scott Woodward, Dan Gaston, and the entire LSU athletic department for the opportunity to lead the LSU soccer program,” Hudson said. “From my first steps on campus, it was highly evident to me that LSU is a special place. With its rich athletic traditions and the passionate support that the fans, alumni and local community have for this University and its student-athletes, all of the core elements are in place for sustained success.

“I will work tirelessly to make the entire LSU family proud of our team and student-athletes. I look forward to reshaping the future of this prestigious program. My family and I are truly honored and humbled to join the LSU family, and the Baton Rouge community.”

Hudson, the 2019 Rocky Mountain Athletic Conference Coach of the Year, led UCCS to a No. 1 national ranking for the first time in program history in 2019 as the Mountain Lions marched to a record of 19-2 and a NCAA South Central Region No. 1 seed in the NCAA Tournament. Five of her players earned United Soccer Coaches All-South Central region honors and Shanade Hopcroft was named the South Central Region Player of the Year and RMAC Player of the Year. Aleesa Muir, a defender on Hudson’s 2019 team, was named to the CoSIDA Academic All-America Women’s Soccer First Team, and teammate Ella Fischer received the 2019 Summit Award from the RMAC which is given to the student-athlete with the highest cumulative GPA in the conference. Hudson’s 2019 squad was an offensive juggernaut ranked in the top 10 nationally in scoring offense (3.19 avg./NCAA No. 4), goals scored (67/No. 6) and total points (187/No. 5), all of which were program records.

Hudson and her staff at UCCS earned South Central Region Staff of the year honors in their debut season in 2017. That campaign saw the Mountain Lions go 17-5-1, make a run to the semifinals of the NCAA Tournament, and win the first ever Rocky Mountain Athletic Conference title in program history.

During her three years at UCCS, she coached Tarah Patterson (2017) and Anna Gregg (2018) to All-America honors as they became the first two student-athletes in program history to achieve the feat. All in all, Hudson coached two RMAC players of the year, two RMAC goalkeepers of the year, and two RMAC freshmen of the year. Ten of her players racked up a total of 15 all-conference awards from 2017-19 at UCCS.

Prior to taking the head job at UCCS, Hudson spent two seasons as an assistant coach at NCAA Division I program Colorado College in Colorado Springs. In her two-year stint, she assisted in every aspect of the program and helped Colorado College reach the semifinals of the 2015 Mountain West Tournament.

Hudson was the general manager for the Colorado Pride W-League Team during the team’s first two seasons in 2014 and 2015. She also served as the assistant coach for the 2014 season and took the reigns as the head coach for the 2015 campaign. Hudson led the team to the conference championship in 2015 and had four players drafted into the National Women’s Soccer League between the drafts in 2014 and 2015, four who played professionally overseas, and four who were named to the National Team in Australia and the United States for the 2016 Olympic Games and 2016 FIFA Under-20 World Cup.

Before entering the collegiate coaching ranks, Hudson spent 2002 to 2015 serving as the director of the Pride Soccer Club in Colorado Springs. She was the head coach of the Pride Predator teams and won 11 state championships, one regional crown, and helped the Pride Predators 99 team advance to the national semifinals in 2014. She oversaw the implementation of the college placement program beginning in 2010 that educated Pride Soccer Club athletes and parents on the collegiate recruiting process.

A solid player in her own right, Hudson played on the Wales National Team and was at one point the youngest international player on the squad at the age of 16. She earned three caps on the senior level at the European Championships from 1997 to 1999, and she made 10 appearances at the UEFA Championships as a captain for the U19 squad. Hudson captured five senior league championships, three league cups and the Welsh Cup for Newport County Ladies squad from 1995-2000.

Hudson earned her bachelor’s in Sports Coaching Science, majoring in sport psychology from Cardiff Metropolitan University in 2002. She’s currently pursuing her master’s degree in sports coaching from the University of Denver and is set to finish in May of 2020. She holds her U.S. Soccer Federation B License, and the UEFA C License and Goalkeepers Award.