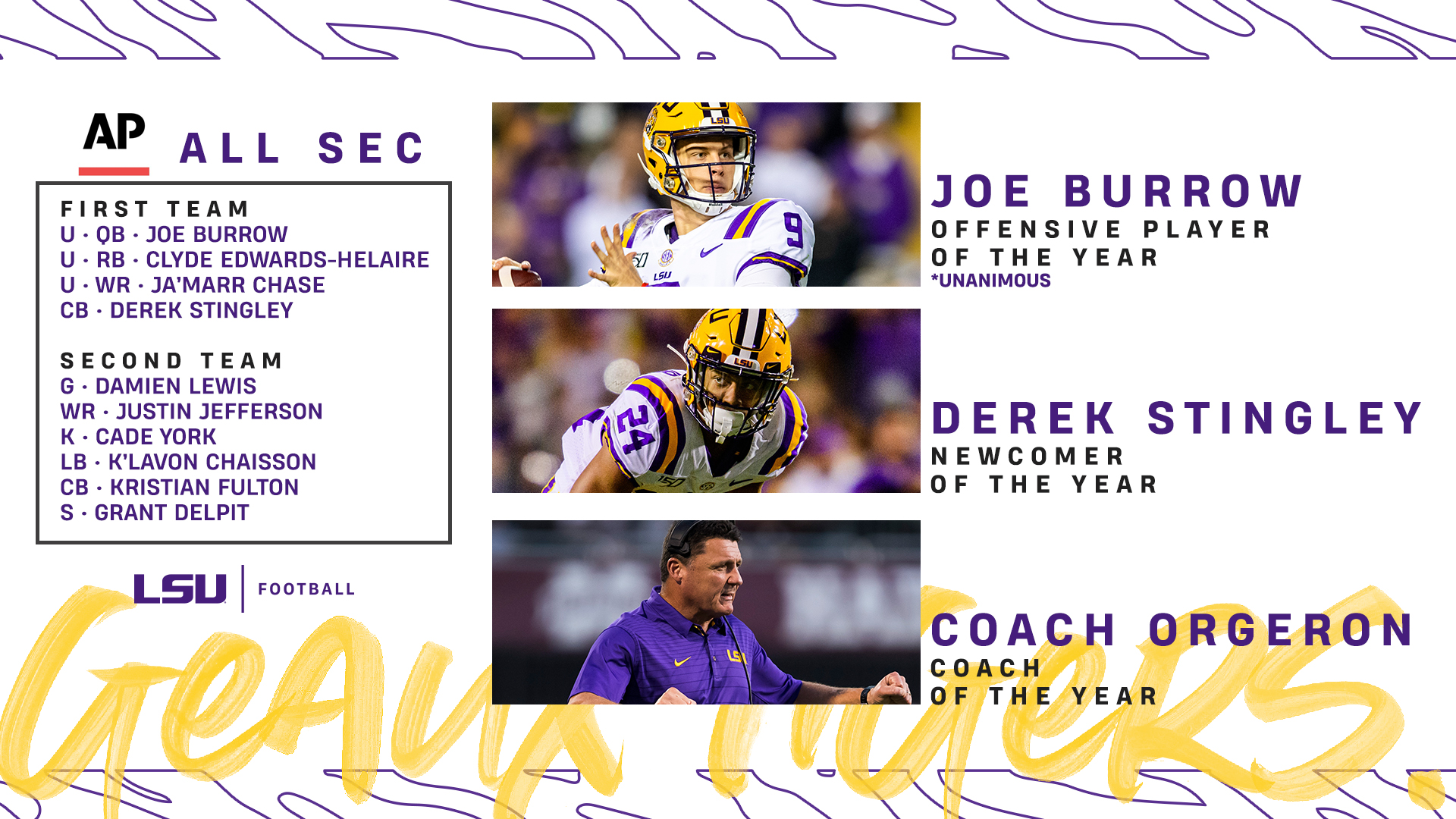 BATON ROUGE – Ed Orgeron has been named the Southeastern Conference Coach of the Year by the Associated Press, while quarterback Joe Burrow is the SEC Offensive Player of the Year and cornerback Derek Stingley Jr., is the league’s newcomer of the year, the organization announced on Monday.

Burrow was the unanimous SEC Offensive Player of the Year selection becoming the first LSU Tiger to earn the league’s offensive player of the year honor since wide receiver Wendell Davis in 1987.

Orgeron, in his fourth year with the Tigers, has led LSU to a 13-0 overall mark and the No. 1 ranking in the College Football Playoff poll. The top-ranked Tigers, which won their first SEC Championship since 2011 on Saturday, will face Oklahoma in the CFP National Semifinals at the Chick-fil-A Peach Bowl on Dec. 28 in Atlanta.

LSU goes into the CFP National Semifinal contest against Oklahoma riding a 14-game winning streak and having a school-record five wins over Top 10 teams in 2019. Orgeron has led LSU to a 9-1 mark in its last 10 games against Top 10 opponents.

Burrow, the Heisman Trophy frontrunner, re-wrote both the LSU and SEC record books this season, breaking both the conference and school marks for passing yards (4,715) and passing touchdowns (48). He’s the first quarterback in SEC history to throw for 4,000 yards and 40 touchdowns in the same season.

In 13 games, the senior from Athens, Ohio, has completed a school-record 342 passes on 439 attempts with only six interceptions. Burrow’s completion percentage of 77.9 percent in on pace to break the all-time NCAA single-season mark of 76.7 held by Colt McCoy of Texas in 2008.

Stingley, a freshman from Baton Rouge, has started all 13 games for the Tigers and he leads the SEC in interceptions (6) and passes defended (21). Stingley, the only true freshman to start every game for LSU in 2019, has 34 tackles.

In LSU’s win over Georgia in the SEC Championship Game, Stingley intercepted two passes in helping the Tigers to a 37-10 win over the Bulldogs.