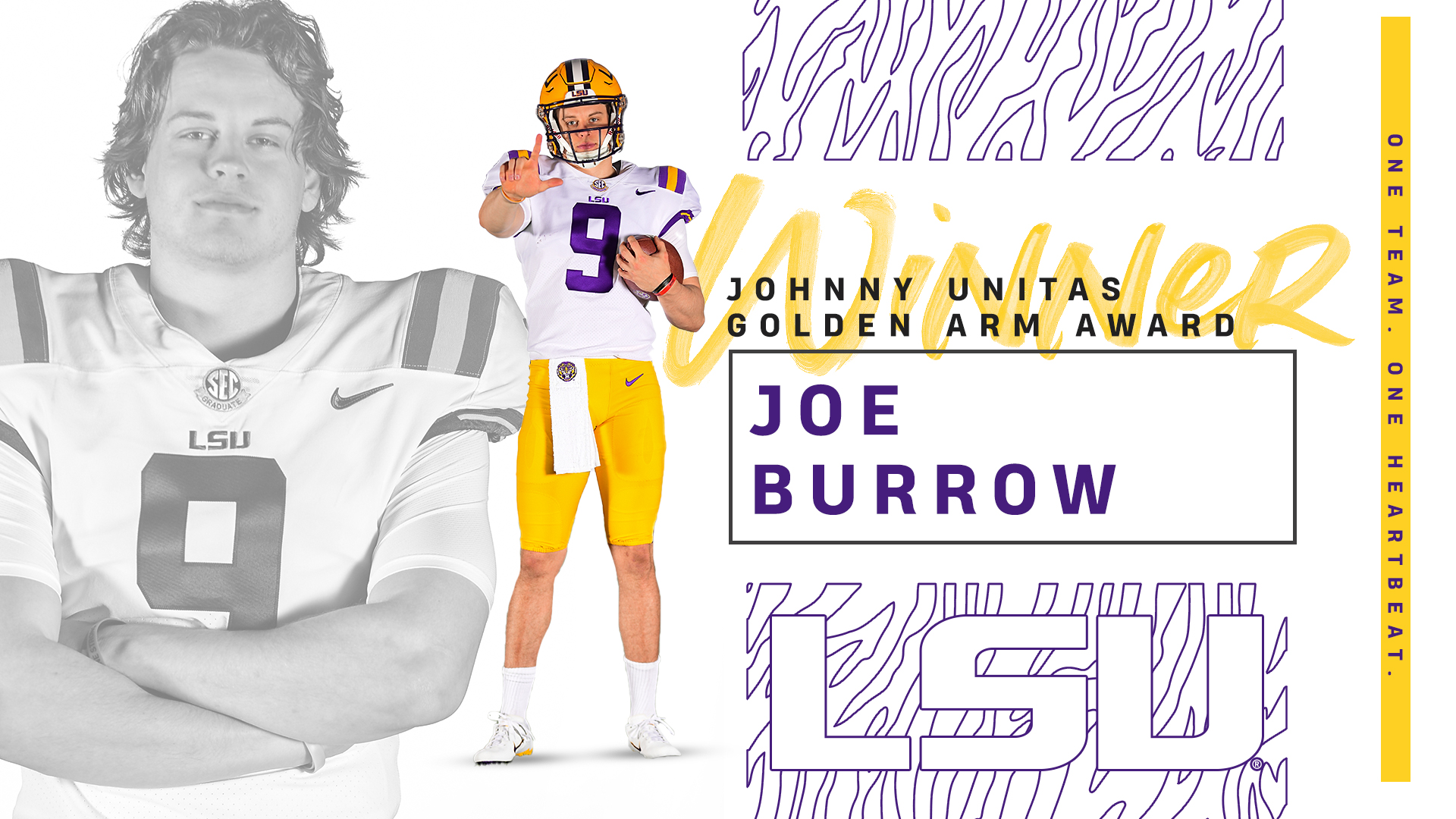 The Johnny Unitas Golden Arm Award is presented annually to the nation’s top quarterback that best exemplifies character, scholastic and athletic achievement. Burrow is the first LSU Tiger to win this prestigious award.

On the field, Burrow has set nearly every LSU single-season passing record in leading the Tigers to a 12-0 overall mark and a No. 1 national ranking. Burrow and the Tigers will face fourth-ranked Georgia on Saturday in the SEC Championship Game in Atlanta.

Some of the greatest quarterbacks in college football have been honored with the @GoldenArmAward. @Joe_Burrow10 is now on that list pic.twitter.com/9XdK4H8qOE

In the classroom, Burrow will graduate later this month with a Master’s degree in Liberal Arts. He earned his Bachelor’s degree from Ohio State University in the spring of 2018 with a degree in Consumer and Family Financial Services.

Burrow is the first player in SEC history to throw for 4,000 yards and 40 TDs in the same season. Last week against Texas A&M, he set the SEC record for passing yards in a season with 4,366 and he’s currently tied for the most passing touchdowns in a season with 44.

In 12 games, Burrow has completed a school-record 314 passes on a school-record 401 attempts. He’s thrown at least one TD pass in a school-record 16 consecutive games and he’s gone over the 300-yard mark in 12 of LSU’s last 15 contests, including six straight games – also a school-record. Burrow holds the LSU record for 300-yard passing games in a season (10) and career (12).

The SEC Offensive Player of the Week five times this year and seven during his two years with the Tigers, Burrow ranks No. 2 in LSU history in career passing yards (7,260) and passing TDs (60). His completion percentage of 78.3 in 2019 is on pace to break the all-time NCAA mark of 76.7 held by Colt McCoy of Texas in 2008.

Burrow’s achievements will be honored on Wednesday, December 11, in Baltimore at the Four Seasons Hotel. The 2012 Golden Arm Award recipient, Collin Klein, will deliver the keynote remarks at the event.

Candidates for the Golden Arm Award – which has been presented at the end of each college football season since 1987 – must be college seniors or fourth-year juniors on schedule to graduate with their class. In addition to the accomplishments on the field, candidates are judged on their character, citizenship, scholastic achievement, teamwork and leadership qualities.