Here Come the Tigers, Who Always Knew They'd Be Here 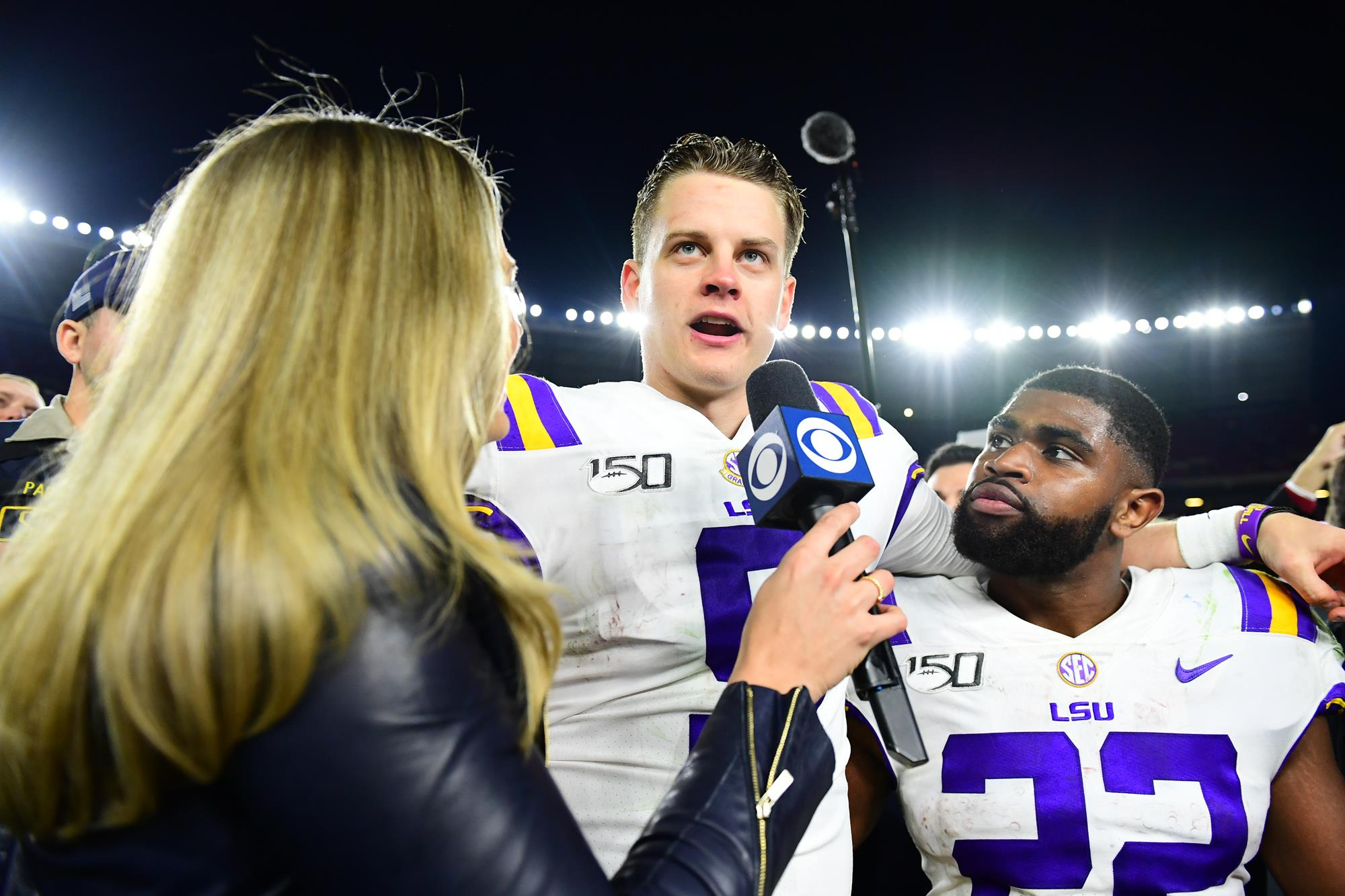 TUSCALOOSA – Here, on one side of the field, is Clyde Edwards-Helaire, embracing his father and weeping tears of joy.

Here, on the other side of the field, is Joe Burrow, carried off on his teammates’ shoulders after putting them on his for explosive stretches all season long.

And here, in the middle is Ed Orgeron, smiling in between screams, screaming in between smiles, full of appreciation and awe and, yes, some tears of his own.

None of them were supposed to be here, for one reason or another, according to one critic or another.

Not them, these underdogs, each of a different breed: the interim coach, the transfer quarterback, the undersized running back.

Not here, in the middle of a post-game celebration of a No.1 LSU win over No. 2 Alabama.

Yet here they are. It’s right where they always expected to be.

It’s right where they belong.

What a moment for Clyde Edwards-Helaire pic.twitter.com/0SyA4Qyx7j

There are a thousand stories to tell about No. 1 LSU’s 46-41 win over Alabama on Saturday in Bryant-Denny Stadium. There’s the history – it was the first matchup of the AP No. 1 team and the Coaches Poll No. 1 team in 50 years. There’s the revenge – it was LSU’s first win over Alabama since the Tide knocked off the Tigers in the 2012 BCS National Championship Game. There’s the game itself, a high-scoring, record-setting affair that resembled very little LSU’s last win over Alabama, a 9-6 slobber-knocker eight years ago on this very field.

Then, there’s the story that’s still being told, the one that started long before Saturday and will continue long after, the one in which this win serves as a single chapter of a larger narrative.

LSU is coming, like Orgeron promised. And they aren’t backing down.

Every story needs a hero, and LSU’s has a bunch tied together by a similar theme.

There’s Burrow, the Ohio State castaway turned Heisman favorite, the Athens, Ohio transport turned unofficial Governor of Louisiana. He was, on Saturday, as he has been all season: undeniably tough, impeccably accurate, and totally unstoppable, completing 31-of-39 passes for 393 yards and 3 touchdowns. He also picked up another 91 yards on 12 carries (not accounting for sack yardage).

If there were any doubts about who the Heisman favorite was, they’re gone, now.

“I always thought I would be on this stage,” Burrow said after the game, “but I didn’t think I would be in this jersey. It’s been a bumpy road and a long one, but I couldn’t be in a better place.”

The Tigers are Home! pic.twitter.com/obkumiD2Ua

There’s Edwards-Helaire, the two-star, too-short scat back who might be listed at 5-foot-8, 200 pounds, but believes himself to be, in the words of his head coach, 6-foot-4 and 270 pounds. On Saturday, he was a giant, picking up 103 rushing yards and 77 receiving yards and scoring four touchdowns – or, to put it another way, as many touchdowns as LSU had scored as a program against Alabama in its previous five matchups.

As he held his father after the game, they talked about it all. The ups. The downs. The heartbreak and the doubt and the failures.

All the things that made this moment special.

“You showed them!” his father yelled. “They said you weren’t an SEC running back. That’s what I’m talking about.”

“Always a proud moment for me to make my dad happy, my family happy,” Edwards-Helaire said.

The proudest moment of the night might’ve been the biggest play of the game. It’s third and 10 at the Alabama 36, and the Tide has cut the LSU lead from 33-13 to 33-27. They have all the momentum.

But they don’t have Clyde.

Burrow drops, and just before he’s pummeled by an Alabama defender, he dumps off his ninth and final target to Edwards-Helaire. It’s low, but Edwards-Helaire bends, scoops it from just above the turf, and looks up.

In the eight yards that separate him from the first down, there’s an Alabama defender.

“Get the first,” he recalls thinking. “Make the catch, get the first. It’s as simple as that. If you think too much, you play slow. I saw the ball, caught it, I knew where the chains were.”

He plants, he plows, and, despite being hit five yards short of the sticks, he makes it a yard past them. Two plays later, he’s spinning past a would-be tackler and walking into the endzone for the game-clinching touchdown.

Every time LSU needed him to get the yard, he got it – and then some.

“I proved I’m an every down back,” he said tonight. “I’m an SEC back. I had doubts coming into LSU: he’s not big enough, he’s not going to be fast enough. You can measure the things they see. But they can’t measure your heart.” pic.twitter.com/Vc1jDK6PMS

“Throw your heart across the line, and your body will follow,” Edwards-Helaire says. “I live by that motto.”

Then, there’s Orgeron. You want to talk about heart? Here’s the interim coach who almost no one believed could re-establish LSU as a championship program.

Most importantly, his team believes. They believed all week. The staff he hired, the players he recruited – together, they were better than their ninth opponent of the season, just as they had been better than the eight that came before.

“The look in everybody’s eye, this was a goal we all had,” says safety JaCoby Stevens. “We knew we had to come to this place to achieve our goal. It’s the hard work we put in. We worked different. At LSU, we’re built different. That’s why we had real confidence instead of empty threats.”

They’ve got the head coach, too.

Look up and down LSU’s roster and staff, and you’ll find others just like Burrow, Edwards-Helaire, and Orgeron – underdogs with chips on their shoulders.

Look at Justin Jefferson, who signed so late and arrived to LSU so skinny some of his teammates thought he was a walk-on. Tonight, he’s catching 7 passes for 79 yards, including a massive third-down conversion to set up Edwards-Helaire’s touchdown.

Or look at Lloyd Cushenberry, another late addition to the signing class who scouts considered a marginal SEC prospect. Now, he’s one of the best centers in the conference, the anchor of a line that racked up 166 rushing yards Saturday.

Offensive coordinator Steve Ensminger hadn’t called plays in two decades before Orgeron hired him before the 2018 season. He’s now calling plays for the best offense in the country and preparing a game plan that netted 559 yards, 29 first downs, and 7.1 yards per play against the No. 2 team in the country.

“We have a lot of guys on this roster who were overlooked,” Burrow says. “Clyde being 5-8, not everybody wanted him. Justin Jefferson being a two-star recruit. Thad Moss, transfer. Me, transfer. I think guys like that are mentally tough.”

“It shows that people in the media and recruiting rankings, it doesn’t really matter,” Cushenberry says. “When you step on campus, all the stars are gone, all the opinions are gone. You just have to work. It just goes to show the character we have on this team.”

For the state of Louisiana.
For everyone who bleeds Purple and Gold.
For the future of this program. #ForeverLSU pic.twitter.com/uiM7RucTLT

Characters with character, underdogs with something to prove.

Makes for one hell of a story.

Now, Orgeron says, it’s time to move on to the next chapter.