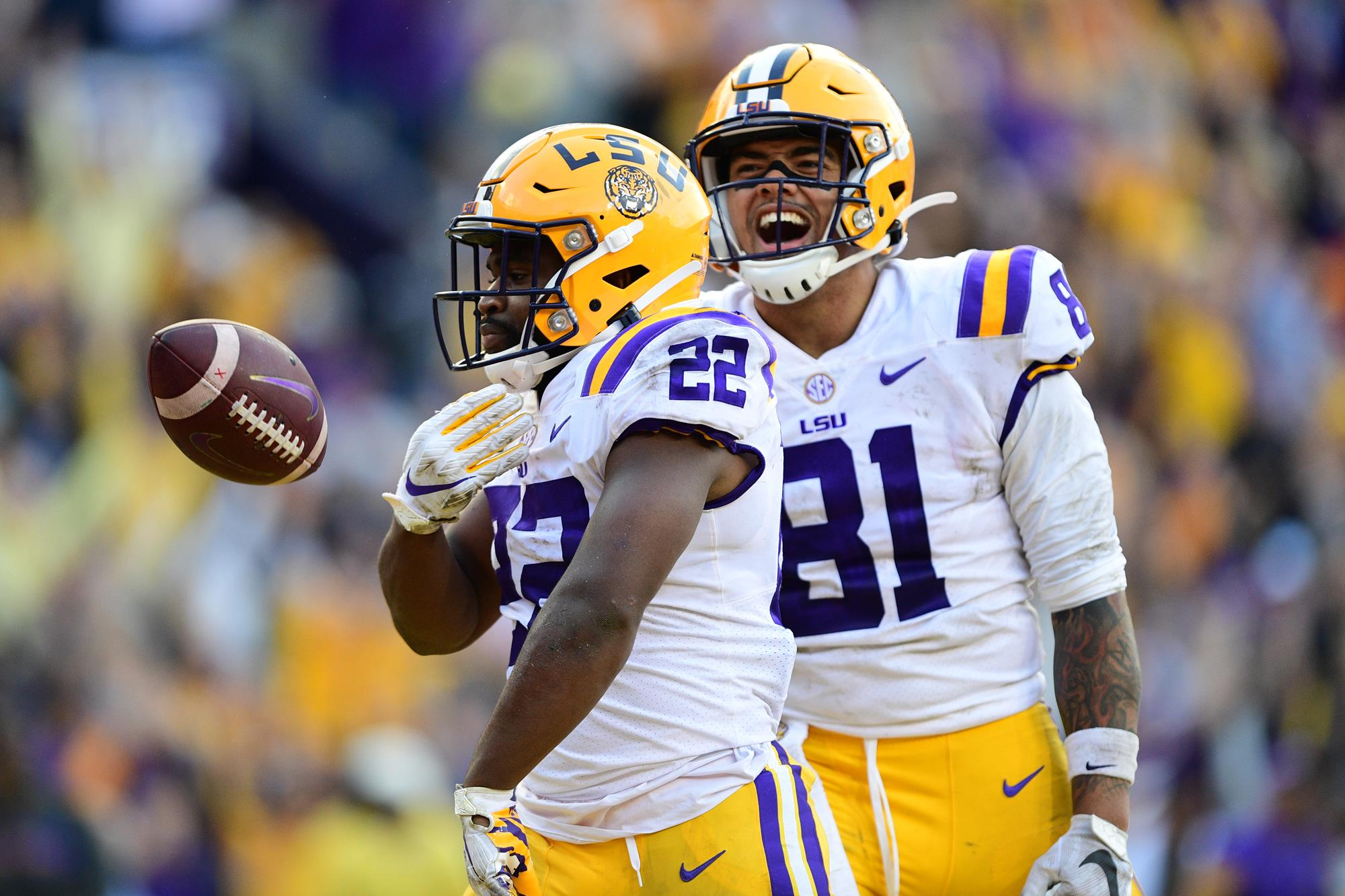 After a hard-fought win on a cool October night, Clyde Edwards-Helaire was thinking about the heat of August.

If you want to find the roots of LSU’s 23-20 victory over Auburn – a slugfest of a win in a season full of shootouts – that’s where Edwards-Helaire goes. If you want to figure out how LSU overcame some sloppy play, sloppy conditions, and some self-inflicted wounds, go with Edwards-Helaire not to the stat sheet, which shows his 136 rushing yards – 110 of which came after halftime – but to the summer.

That’s when LSU’s preparation for Saturday night began, in his mind. That’s when his head coach rewarded a long camp run by the Tigers’ offense by making them turn around after a big gain and drive the other way. That’s when Edwards-Helaire got a taste of adversity he’d get mouthfuls of Saturday afternoon.

“We’d run it to the 15, and all of a sudden, we’re at the negative-15,” Edwards-Helaire remembers. “That’s unreal, and it prepares you for games like tonight.”

For all the electrifying feats and gobsmacking stats LSU put up in its first seven wins of the season, there was something intangibly gratifying for the Tigers in grinding out number eight on Saturday.

For LSU, Saturday’s was certainly the latter. By the game’s end, Tiger Stadium’s turf was a chewed up mass of muck and mire. After 60 minutes of battle, it looked as a battlefield should: when the skirmish ends, blood and mud in the places where grass once stood.

“We definitely showed toughness today,” said quarterback Joe Burrow, who seemed, somehow, to grind his way to a 32-of-42, 321 yard performance in the effort, with a touchdown on the ground and another in the air. “It wasn’t pretty by any means. But SEC games aren’t going to be pretty. When you can come out on top against a top 10 team and still feel like you could play better, it’s always a good feeling.”

Statistically, the homestanding Tigers dominated almost everywhere but the scoreboard. The offense rolled up 508 yards and 30 first downs. The defense held Auburn to just 287 and 16. Four of Burrow’s receivers caught at least eight balls, led by Ja’Marr Chase’s 123 yards on 8 grabs. Auburn had one player with four catches and another with three; the rest, one or two apiece. LSU went three and out once before two clock-milking drives late in the fourth; Auburn went three and out six times, including four straight possessions in the third and fourth quarters.

But stats only tell part of the story. LSU, who had trailed for just 10:32 all season, was behind for more than 20 minutes against Auburn. The visiting Tigers used a new, previously-unseen defensive scheme – two stacked linebackers behind three down linemen – to slow down LSU early. Then, the visitors took advantage of LSU penalties and a muffed punt to score 10 points on drives that needed just 64 yards combined.

Add in just 29 first half rushing yards, two stuffed fourth down attempts, and the first scoreless red zone trip of the season for LSU, and the odds seemed intent on stacking in Auburn’s favor. It wasn’t the first time LSU was on the ropes all season, but it was the most wobble their knees had shown.

“I think a lesser team would not have won that game tonight,” said Orgeron. “Adversity hit us. We weren’t playing very well in the first half. They got up ahead, but our guys kept on fighting.”

Adversity wasn’t the only thing that hit LSU. Somewhere near the 25-yard line closest to the south end zone, there may remain bits of Burrow’s helmet where an Auburn defender’s shoulder collided with the quarterback’s head in the first half.

As ever, Burrow popped up from the hit like a bop bag, connecting on five of his next six passes for 78 yards and a touchdown to retake the lead.

“If your quarterback shows toughness like that, it can get a team going,” Burrow said. “It’s what I try to do every day: in the weight room, on the field, taking hits, getting right back up. If you lay down on the field and don’t hop right back up, it shows your team you’re not into it.”

On the other side of the ball, LSU’s defense laid plenty of licks of their own. Dave Aranda‘s defense harassed freshman quarterback Bo Nix into a 15-of-35 for 153 yard night, intercepting him once and sacking him three times. Auburn entered the game averaging 240 yard per game on the ground. They managed just 130 against LSU, 111 of which came on the final run of the first half and the first run of the second half.

“When our defense plays like that,” Burrow said, “no one is going to beat us.”

As the defense stacked three-and-outs in the third and fourth quarters, the offense took to the ground, picking up 158 rushing yards in the second half, including a four-play, four-run, 45-yard drive to re-take the lead with less than five minutes left in the third quarter.

“They were daring us to run the ball,” said center Lloyd Cushenberry. “We felt like we needed to get it going.”

“Everybody talks about our pass game, but I think our run game really opens up the rest of our offense,” Burrow added. “We start running the ball like we did in the second half, people play us honest, and our play action starts opening up. They have to play more vanilla defenses. They can’t give us the stuff they gave us in the first half.”

In a season marked by a new-school offensive approach, LSU won Saturday with an old-school mentality. Sure, the modernity was still there – the bunch sets and the check-with-mes and Burrow slinging the rock all over the field (his 32 completions and 42 attempts were both the most by an LSU quarterback in Orgeron’s tenure).

But underlying it all was a lumberjack mentality tight end Thad Moss hammered on in the postgame locker room.

“It was a fight today,” said Moss, who added a heavy dose of run blocking to his seven catches and 45 yards receiving. “A four quarter fight….We know how to win a gritty game. We know how to keep chopping wood.”

If Edwards-Helaire goes back to the summer to find that mentality’s origin, Burrow goes back further. He remembers beating Auburn 21-19 in Jordan-Hare. He remembers losing to Florida in Gainesville, a game-ending pick six that still haunts him, or falling to Texas A&M after seven overtimes in College Station. The fires of those defeats forged something in him, something in this team, something they showed at times this year, in between the fireworks and flash, but something they put on full, mud-coated display Saturday.

“We’ve faced a lot of adversity as a team the last two years,” Burrow said. “That was the starting point for this team, building that comradery, building that toughness it takes to win in these SEC games. I think it started last year.”

This year, it means 8-0. It means three wins over top-10 teams in eight weeks, a first in SEC history. It means a No. 2 ranking in the polls that could be even higher come Sunday.

All that means nothing to Orgeron. All Saturday means to him is he’s got a gritty team. He’s got a group that’s turned pain – whether it’s from last season or last summer – into eight wins, and, just maybe, a few more to come.

“It was a gut check tonight,” Orgeron said. “Our guys have grit. Our guys have character. Those guys stick together. They didn’t want to be denied tonight.”