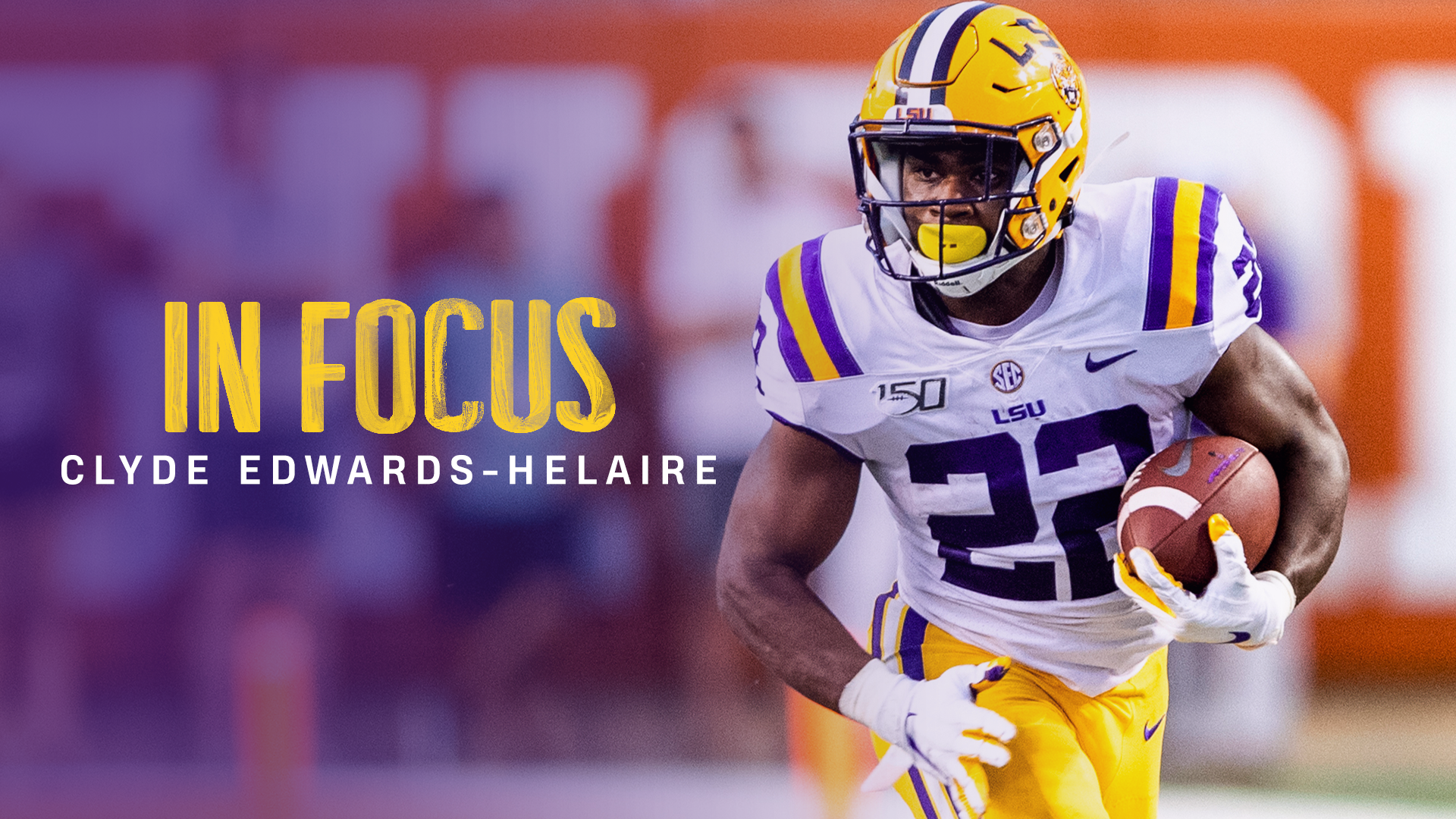 It’s among the chief benefits of having a stepfather who works as a narcotics cop – especially when that stepfather doesn’t mind letting you tinker with his toys.

“They had all those special gadgets,” Edwards-Helaire says. “Just cool police equipment, things you don’t see normal cops having.”

His favorite device: a pair of binoculars. Pressed against his inherently ordinary pupils, they granted Edwards-Helaire superhuman sight, turning his eager eyes into eagle eyes.

The first @LSUfootball preseason game is in the books. We break down the action from Tiger Stadium, then @Clydro_22 talks new offense, young RBs, growing up with military discipline, and getting the extra yard.

“They had a basketball court down the street from my house,” he says. “I could get those binoculars – the court was some ways down – and I could literally see everybody on the court with those.”

It doesn’t take extraordinary eyesight to see Edwards-Helaire could be set for a breakout season for LSU in 2019. Despite all the incoming and returning talent at tailback for the Tigers, the junior from Baton Rouge remains the starter, because he learned from his love of his stepfather’s gear.

Be a useful gadget, and you’ll get put to use.

PERHAPS NO ONE in the Tiger backfield offers the versatility of Edwards-Helaire, LSU’s back-of-all-trades and master of many. It’s why this preseason, he landed a spot on the Paul Hornung watch list, given annually to the nation’s most versatile player. It’s why he draws comparisons to Alvin Kamara, the New Orleans Saints superstar equally comfortable lowering his shoulder into the A gap as he is catching a swing pass in the flat or lining up in the slot. It’s why, in a new passing game coordinated by former Saints’ staffer and current Tiger assistant Joe Brady, Edwards-Helaire looks to be a featured weapon.

“He fits this offense so well,” says Jacob Hester, former LSU running back and national champion. “He can do so many different things. He’s a guy who can pass protect, he can catch the ball out of the backfield, and he can be a weapon in the run game.”

Last season, Edwards-Helaire flashed those abilities, but his role was quite different. He and Nick Brossette served as complementary pieces in a two-pronged running game and were asked to protect the quarterback as much as they were asked to catch passes from him.

The flashes were fantastic, though. Just ask Georgia, who entered Tiger Stadium on October 13 ranked No. 2 in the country and left with a 36-16 defeat. Edwards-Helaire inflicted most of the damage, rushing for 145 yards on 19 carries. No other back eclipsed the 100-yard mark against Georgia for the rest of the season.

“There were times where I got to display pass pro, and I didn’t really get to catch the ball a lot in last year’s offense,” Edwards-Helaire says. “As far as me running the ball, that was displayed. Georgia, they were great, and that was a big thing for me.”

All week before Georgia, offensive coordinator Steve Ensminger‘s message to Edwards-Helaire was succinct: get that extra yard.

By season’s end, Edwards-Helaire was LSU’s leader in all-purpose yardage (1,170 yards), its second-leading touchdown scorer (7), and the SEC’s highest-graded red zone back (86.4, per Pro Football Focus).

He might be 5-foot-8 on a good day and in his highest spikes, but as far as Ed Orgeron is concerned, Edwards-Helaire is a giant.

Striving for better this year! https://t.co/vKarFYh7Dm

Edwards-Helaire jokes his parents, both of whom served in the military, gave him everything he needed to be a star football player – athleticism, discipline, and intelligence – but height.

But Devin White thinks Edwards-Helaire’s frame is perfect for his game. Speaking with Hester last season, the All-American linebacker and top-five NFL Draft pick said Edwards-Helaire often sneaks up on defenders, especially from the shotgun, where he can stay behind his blockers, remaining relatively undetected.

Until it’s too late.

“He has a tendency to get lost,” White told Hester. “When Clyde’s in there, you can’t find him. He hides extremely well, and when he gets on you, he’s so strong that it’s already too late.”

One area LSU struggled to find Edwards-Helaire last season was in the passing game. He caught just 11 balls all year for 111 yards, but he made the most of his limited opportunities.

According to Pro Football Focus, Edwards-Helaire was the fifth-highest graded running back in the passing game in all of college foootball last season. Of his 111 yards, 104 came after the catch. He didn’t drop a single one of his 13 targets, gained 53 yards after contact on receptions, and forced a team-high six missed tackles after catches, despite having fewer grabs than eight other Tigers.

“It’s tough to cover Clyde out of the backfield,” says quarterback Joe Burrow. “We’re looking to get him matched up on some linebacker this year.”

It’s a key feature in Brady’s reenvisioning of the LSU passing game. He’s bringing concepts from New Orleans that have kept the Saints atop the NFL’s passing charts for a decade, a style that prioritizes running backs as more than mere Checkdown Charlies.

They’ll line up in the slot, they’ll split out wide, and while they’ll still pass protect – Edwards-Helaire had a pass block efficiency of 98.5% last season, fourth among SEC running backs – that’s not their primary focus.

“Running backs are here to run the ball and catch passes,” Brady said this summer. “They’re not signed to play at LSU because they’re dynamic blockers. That’s what offensive linemen are for.”

THE FIRST GLIMPSE Edwards-Helaire got of his new role was this spring, when Brady began installing the passing game. After four catches in the spring game and 77 yards on the ground, his appetite for more passes only increased.

“I took that to heart,” Edwards-Helaire says. “Seeing this offense, I got excited about it, and what do I need to do in order to excel in this offense? I need to run routes, and I need to catch balls.”

A summer of Saturdays throwing with Burrow at 8:30 a.m. followed, as the two developed even more chemistry and Edwards-Helaire perfected the details of his craft. He’d played in the slot in high school, but he had to fine-tune every branch of the route tree to be ready for this fall.

“If I didn’t feel comfortable with something or Joe wanted me to run it a certain way because he felt it’s better for timing once pads came on, then that’s what we did,” Edwards-Helaire says. “We worked on timing, we worked on catching. I hopped on the jugs machine and caught a lot of balls.

This fall, those thoughts are manifesting themselves in reality. Through two games, he already has eight catches in the passing game, while picking up 132 yards and two scores on the ground at a 5.5 yard per carry clip. He’s also avoided 11 tackles on 24 carries, the best ratio in the SEC among qualified backs.

Edwards-Helaire’s primary concern this season, though, is entirely collective. He wants to win, and he’ll do whatever it takes to help the team do that. Block or run, catch a touchdown or – as he did against Texas A&M last season – throw for one. If it means a win, Edwards-Helaire means to do it.

The boy who looked great distances through his stepfather’s binoculars has become a man with a more specific vision: do whatever it takes to win.

“I do what needs to be done in order for the team to win the game,” Edwards-Helaire says. “I was brought up like that: do what you need to do for the team, and everything else will fall in place.”

He’s happy to be a useful gadget. But he’d prefer to be a victorious one, most of all. And if the two concepts overlap?

Edwards-Helaire can envision that just fine – no assistance needed.