Third and 17: An Oral History 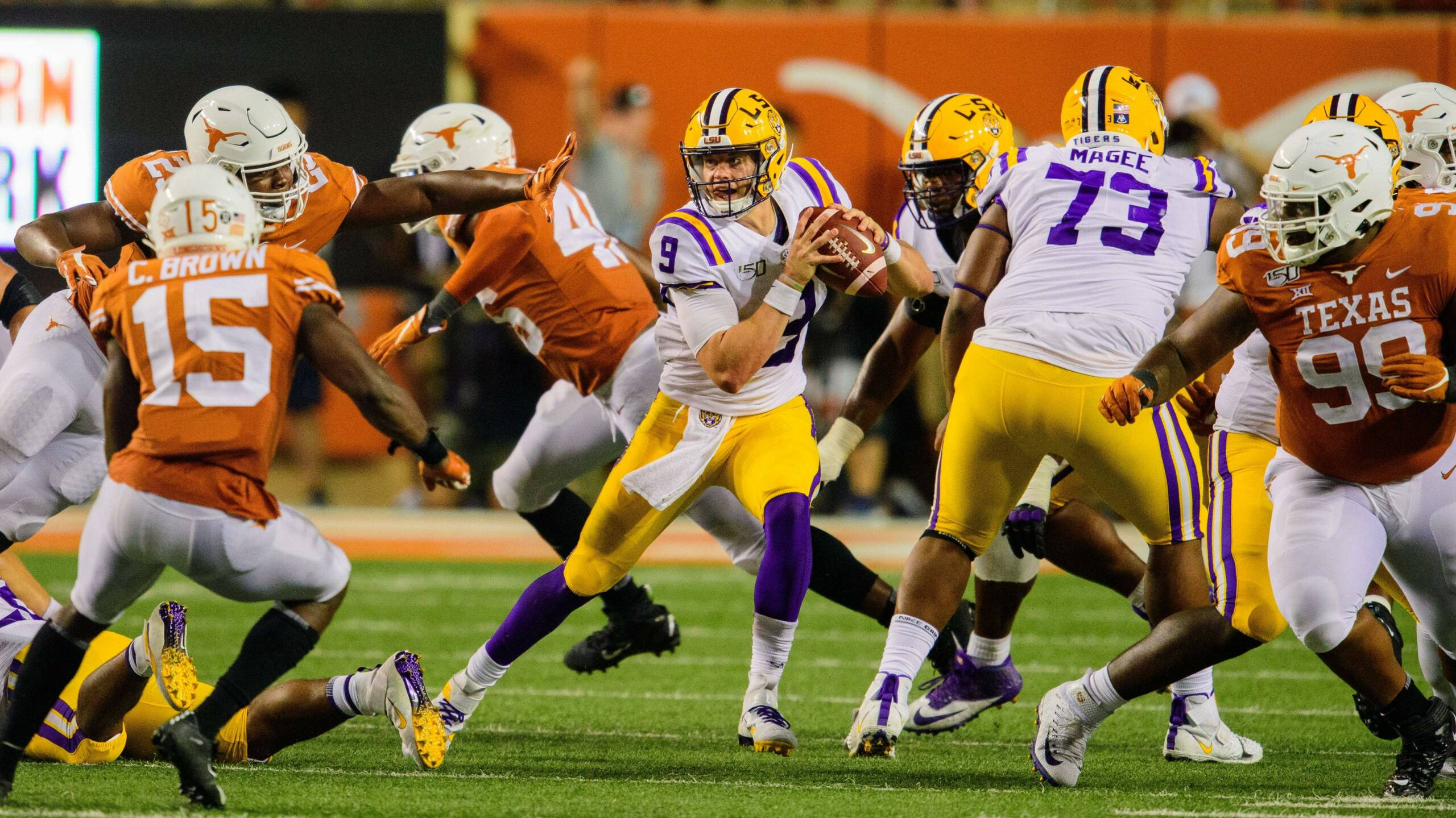 With 3:59 left in No. 6 LSU’s matchup with No. 9 Texas in Austin on Saturday, September 7, 2019, the Tigers took over at their own 25 with a 37-31 lead. While LSU’s offense was rolling – behind the magnificent play of senior quarterback Joe Burrow, the Tigers had tallied 500 yards and scored four touchdowns already on the night – Texas’ attack was firing on all cylinders, too. Behind the passing of junior quarterback Sam Ehlinger, the Longhorns had scored 24 second half points to trim the Tiger lead from 13 points to just six. As Texas’ kickoff went into the endzone for a touchback, LSU head coach Ed Orgeron began chatting with offensive coordinator Steve Ensminger on the head set and asked if he wanted to go into the four-minute offense, a conservative tactic designed to run the clock out.

Justin Jefferson, junior wide receiver: “(Burrow’s) confidence. The way he carries himself. The way he puts the team on his back. It’s crazy, the way he feels so comfortable in situations like that.”

Lloyd Cushenberry, junior center: “On the sideline, we weren’t nervous at all. We knew we were going to come down and seal the game up and get the job done.”

Kirk Hebrstreit, ABC color commentator: “What I want to know is: do you run the ball? Do you work clock? Do you force them to use timeouts? Texas has got to pin their ears and come after Burrow and anticipate the run. They have to sell out here, which means they’ve got to leave their corners in man-to-man coverage, which has been a problem all night.

Orgeron: “We were going to go four minute (offense). Steve said, ‘We can pass the ball and make some first downs.’ I said, ‘Go get it.’”

Burrow: “It’s definitely different from what we did last year. I think (last year) we would have tried to pound the run game and eat up that clock. You saw it last year against Texas A&M. We didn’t get the job done. And they ended up scoring. We wanted to go in that drive being aggressive, and it paid off.”

Herbstreit: “I love it. This is LSU we’re talking about, the king of conservative, and they’re out here throwing it with Burrow with the lead.”

Rece Davis, ABC play-by-play: “I think they’ve abdicated that throne of being king of conservative.”

After a pair of first downs, LSU stalled near midfield. Burrow fired incomplete to Jefferson on first down and was dragged down for a sack on second, forcing third and 17 from the LSU 39. Texas called timeout to set up its defense, leaving the Longhorns with just one final timeout to stop the clock.

Tom Herman, Texas head coach:  “We wanted to pressure him to obviously get a sack or incompletion.”

Burrow: “I knew they were coming. They were blitzing one more than we had to block, and they had a spy on me in the middle. I knew if I bought time, my guys were going to be open.”

Orgeron: “When you blitz, there’s going to be holes in the coverage. We had to protect for some time. We didn’t protect (the entire game), but when we did protect, there were big holes there.”

Burrow: “They were playing cover zero. I knew I was gonna have to take a shot.”

Herbstreit: “The linebackers are coming. They’re trying to bring the pressure.”

Burrow: “Clyde (Edwards-Helaire, junior running back) did a great job of picking up the blitzing linebacker right through the middle, he cut him.”

Blair: “…Burrow steps away from it….”

Burrow: “I knew Justin, I was waiting for his stick on his last foot before I made the ball leave my hands.”

Jefferson: “I’d been killing the safeties the whole game. We’ve been going over the deep overs all week. Joe trusted me to make the play,”

Burrow: “I was able to buy just enough time for Justin to get open over the middle. I saw Justin open. His body language was telling me when he was going to break, so I just jumped.”

Cushenberry: “I just felt Joe, he was literally on my back as he was throwing it.  I was just trying to just finish the block. He jumped and he was right on my back. I just saw Jets wide open in the middle of the field.”

Herman: “We brought pressure, and they did a good job getting open and getting the ball off before the pressure could get there.”

Burrow: “That was one of the best throws I’ve made. I was pretty proud of myself after that one, I’m not going to lie.”

Davis: “Over the middle. Complete to Jefferson.”

Cushenberry: “I knew he was going to take it to the house.”

Orgeron: “(Jefferson) wants the ball in his hands. He’s got ice in his veins. He doesn’t panic.”

Jefferson: “Joe trusted me to make the play, and I just scored the touchdown.”

Matthew McConaughey, star of “How to Lose a Guy in 10 Days” and Texas fan: *Expletive*

“We’re going to pass the ball and go down there and score.”

The touchdown did, in fact, serve as the knockout punch. Texas would add one final touchdown, but it was Burrow’s 61-yard third-and-17 strike to Jefferson that ended up being the difference in the ball game.

In some ways, though, it was worth more than the six points it put on the board (plus two more after the two-point conversion). It was the culmination of both a historic single-game performance and a three-year overhaul of an entire offensive scheme. Burrow would finish the night with 471 yards passing, the second-most in a single game in LSU history, while Jefferson, Ja’Marr Chase, and Terrace Marshall became the first trio of Tigers to eclipse 100 yards receiving in the same contest.

The play, the call, and the execution completed the transition of LSU’s offense into the modern, explosive attack Orgeron once envisioned and now sees clearly in front of his eyes. The nation sees it, too.

Herbstreit: “That is the difference in LSU. Even me up here, I’m thinking, You’ve got the lead. Run the ball. Make them use their last timeout. But this is 2019 LSU. This is Joe Burrow. Forget that. ‘We’re here to win. We’re here to play for championships.’”

Orgeron: “Man, he was so fired up. The kid is a baller. He lives for that moment.”

Burrow: “But we know it’s a long season. And we’re still not even in SEC play yet. So there’s a lot of room to improve.”

Jefferson: “We all are capable of having 100-yard games. We made history having three receivers going over 100 yards. We’re having that mentality every game. We want to set records, we want to make history.”

Cushenberry: “The confidence, the poise, he’s always cool, calm, collected, man, and it rubs off. It’s contagious for the rest of the offense.”

Edwards-Helaire: “It’s a throw that I’ll remember for the rest of my life. Joe was getting hit and threw a ball off one leg side-armed to Justin Jefferson. That’s something I’ll take to my grave. A guy with arm talent like that and being so composed, that’s hard to find, and we have it.”

Burrow: “I knew I was good enough to do this. Still, at the end of the day it’s Week 2. Not into SEC play yet, so we’re still focused on getting better every day.

Orgeron: “What a great play. I’m always going to remember that play.”