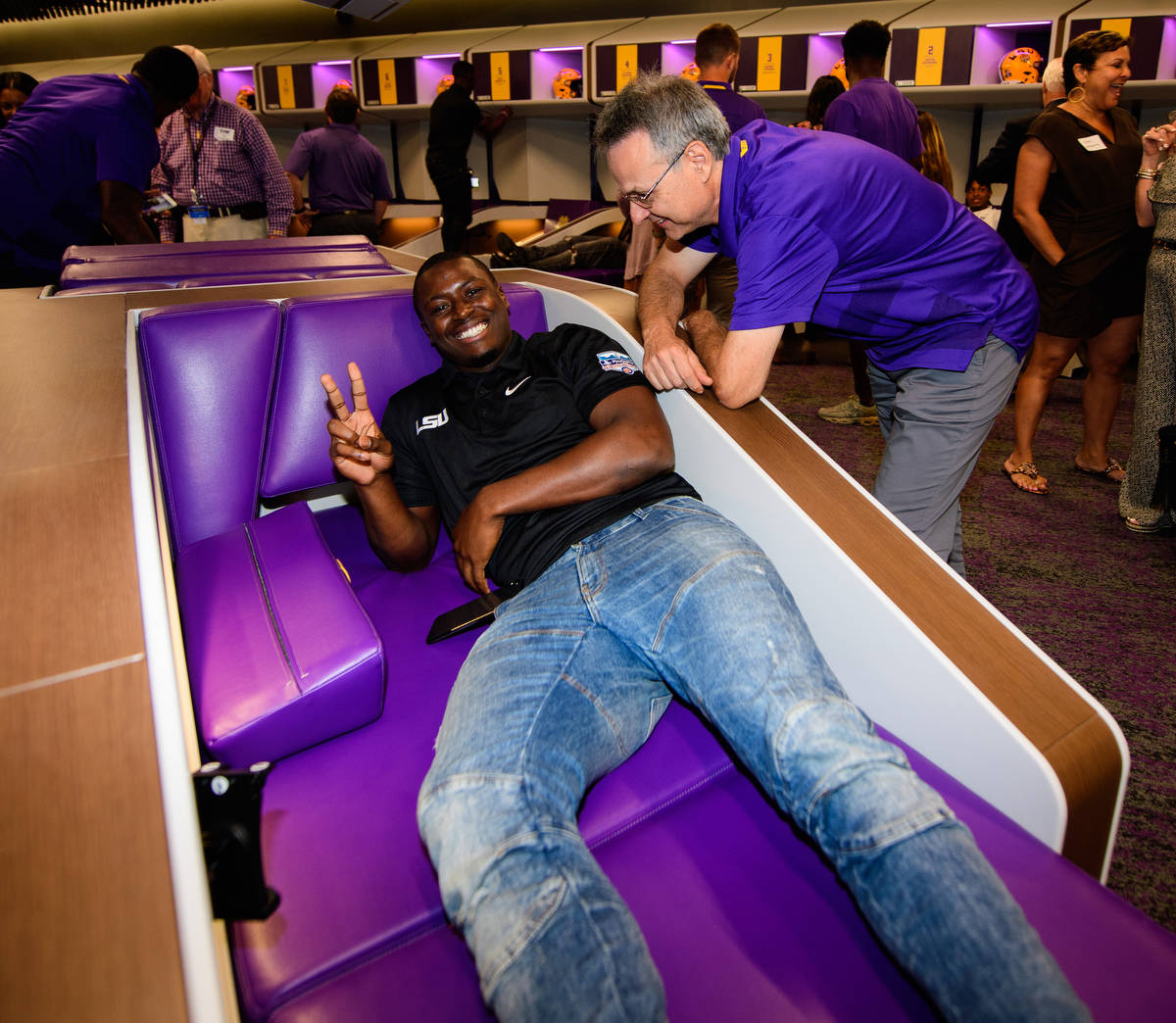 It’s noon, and Damien Lewis is ready for his nap.

LSU’s senior guard is happy to answer any questions reporters have for him this Sunday afternoon, the third day of fall camp for the Tigers.

But as soon as he’s done, he’s heading back to LSU’s brand new locker room – “the space shuttle,” he calls it – and reclining in his pod for a quick snooze before practice in the afternoon.

For Lewis, the very thought of his upcoming siesta inspires poetry.

“That’s our space shuttle,” he says. “We go back there and cuddle.”

Lewis laughs at his unintentional rhyme, and he clarifies: cuddling isn’t precisely what’s happening in the Phillips-Bordelon Locker Room every day after lunch and before practice.

But plenty of Tigers are taking the time – and the specifically-designed space – to get critical rest at a time of year where rest is invaluable.

All because they’re learning how to tap into the power of the power nap.

THE SCIENCE IS clear. And Jack Marucci loves clear science.

Four years ago, Marucci, LSU’s director of athletic training and experimenter-in-chief, began partnering with a sleep doctor to study the effects of rest on football players.

What they found was both obvious and often overlooked: the Tigers needed more rest. Their brains needed it, and their bodies needed it, too.

“The benefits have been well-documented,” Marucci says, “from focus and concentration and mood behavior. The number one thing is, that’s when you release a lot of your growth hormones for body repair and recovery.”

More than any time of year, fall camp – the four weeks before school starts where LSU’s players are in football-mode 24/7 – puts a premium on repair and recovery, because it puts unusual stresses on the body.

During camp, players wake around 6:45 a.m. and don’t finish meetings until 9:45 p.m. For those 15 hours, they tax their minds with complex playbooks and complicated schemes, and they tax their bodies with grueling practices in sweltering heat.

In times of great stress emerges a paradox: rest is never more important, and it’s never more difficult to accumulate. Studies have shown athletes in camp environments get lower quality sleep than in home environments, and unlike professionals, who are more or less done developing physically and mentally, college athletes are in the final stages of brain development, when body and mind crave as much sleep as it can get.

That’s because sleep is powerful, both as a recovery tool and a performance enhancer.

“It’s probably the most unsexy piece about performance,” Marucci says. “Because you’re not putting supplements in them. You’re not hooking up anybody to machines. It’s sleep.”

As powerful as sleep is with performance enhancement, it’s just as critical in injury prevention. Athletes who sleep less than 8 hours are 1.7 times more likely to get hurt than athletes who sleep more than 8 hours, according to research from The Institute for Scholastic Sport Science and Medicine, and 65% of athletes who averaged less than eight hours of sleep over a 21-month period suffered an injury during that time. And 95 percent of the body’s daily production of growth hormone is released from the pituitary gland during the third and deepest stage of sleep, non-rapid eye movement (NREM).

ROWS OF BODIES scattered across the floor signified the losers in previous camps.

Those who curled up on smelly carpets were those who failed to win the race to the training tables, the first choice of past players in need of a nap.

After the training tables filled up, the remainder found a spot on the floor, or else wasted time driving back to their apartments. There, they’d sleep for a few anxious minutes, worried they’d be late for afternoon meetings. By the time they’d napped, woken up, driven back to the facility, and found a parking spot, they’d wasted valuable time.

Or, in the worst case scenarios: they simply didn’t rest at all.

Driven by that knowledge, Marucci wanted each player to have a dedicated sleeping space in the facility. He first imagined a locker with a Murphy bed, sketching out his idea and handing it over to the renovation’s architects. That was inefficient, though, both with space and money.

The second solution was better. On a flight back from Lambeau Field in 2016, LSU director of equipment Greg Stringfellow was inspired by a first-class airplane pod, the way it maximized minimal space and offered comfort without clutter.

Turns out, designing a first-class pod on the ground is far more cost-efficient than one in the air. Stripped of FAA regulations and concerns over aerial hazards, LSU was able to team up with its architects to design its one-of-a-kind performance pods, revealed to the public and players just a few weeks ago.

“Why would I need to leave? I got everything I need right here.”

Since they first laid their eyes – and their bodies – on them, the Tigers haven’t wanted to leave.

After two days of comfy camp naps, several were considering asking their head coach if they could sleep overnight in their pods.

No one has wasted time making himself at home in his pod. Junior running back Lanard Fournette set up an industrial fan near his. Lewis brought two comforters: one to cover up with, and one to create a tent-like cover overhead.

The specialists, meanwhile, took a group trip to Wal-Mart, loading up on sheets, pillowcases, and blankets.

Cost efficiency, it seems, is contagious.

“I went with a throw blanket,” says senior long-snapper Blake Ferguson. “A silky throw blanket. And then I went firm pillow, with a nice pillowcase. I typically go 500 thread count or higher. I like the nice hotel thread count. I don’t like to go super cheap. I don’t want to be back at Wal-Mart buying another pillowcase in a month and a half.”

Comfort is half the battle, but it’s an important half. One of the common questions externally about sleeping in the locker room was the smell, but LSU thought of that during the design process. A ventilated mudroom between the practice field and the locker room keeps smelly shoulder pads and cleats away, and proprietary ventilation for both the upper and lower portions of the pod sucks out any lingering odors.

“I was kind of skeptical of the ventilation inside the locker that sucks the bad air out,” Ferguson says. “But it really doesn’t smell bad. It smells like a fresh new locker room every time we walk in there, which is really cool.”

The other half of the battle is the noise. The snoring is abundant, and while Fournette’s fan blocks out some of it, white noise can only offer so much audial protection.

“You’ll walk in there and you’ll just hear this humming,” Ferguson says, “guys just sitting there, snoring in their locker.”

Snoring isn’t the only sound, either.

LEWIS HEARS VOICES in his sleep. The mystery is whose voices he is hearing.

He claims his locker neighbor, freshman lineman Charles Turner, is a sleep-talker who hears voices of his own.

Ferguson, however, is skeptical. His locker is just behind Lewis’s, and he’s convinced the Turner theory is hogwash, a conspiracy theory concocted to distract from the truth of the matter.

“Damien is deflecting,” Ferguson swears. “Damien 100 percent talks in asleep. He was roasting somebody in his sleep. Damien was talking about the White House or something in his sleep, too.”

While Lewis dreams of the nation’s capital, Marucci is dreaming about the benefits of a well-rested team. It doesn’t have to be more than a 20-minute power nap – 20 minutes is ideal, because it doesn’t allow an athlete to fall into slow-wave sleep; alternatively, 90 minutes is also ideal because it allows for a full sleep cycle – or even just quiet relaxation with the iPad hanging on the mount inside the pod or a few minutes with a NormaTec recovery boot on.

“This is going to prevent a lot of injury,” Marucci says. “You can sink down into the walls of your sanctuary, and it puts you in a better a better mindset, that your head doesn’t have all that clutter. You’re right there a comfortable environment, that gives you the ability to watch video, you can get treatment, there’s a space there for hydration. So it’s all within that area.”

The Tigers are only a few days into camp, but they can already feel the difference. They’re saving time, they’re stressing less about being late or finding parking, and they’re fresher on the field.

“It’s not even not even just the sleep part,” Ferguson says. “It’s being off your feet. Just be off your feet for an hour and a half, two hours at a time is huge, because that helps start the recovery process even faster. So it really is awesome.”

It’s why Lewis practically runs back toward the locker room when his media session finishes. It’s also why, when team meetings finish later that night, he’d like to stay and fill the freshly-ventilated air of his space shuttle an overnight’s stay worth of sleep talk.