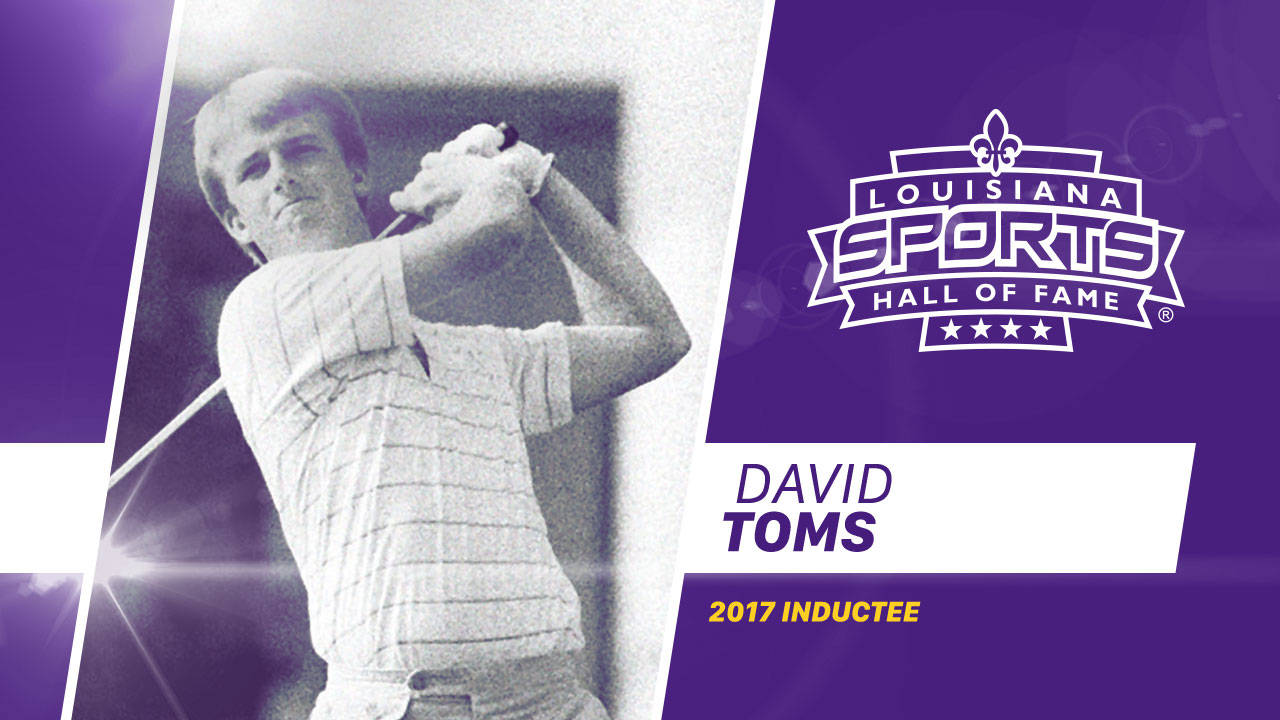 By Roy Lang III
Written for the LSWA

(LSUsports.net Note — The induction ceremonies for the 2017 class of the Louisiana Sports Hall of Fame is set for Saturday night in Natchitoches. This year LSU is represented by four people who left or are still leaving their mark on sports at LSU and the state of Louisiana: football player Eddie Kennison, coach Ray Didier, golfer David Toms and current LSU gymnastics coach D-D Breaux. Today is the third of four profiles on this year’s LSU links to the Louisiana Sports Hall of Fame class.)

In the 1990s, the Dallas area was – and remains — a popular retreat for professional golfers. Thanks to a myriad of prime travel options, optimal weather and a bevy of immaculate venues, the Metroplex served as a logical place for a talented upstart to establish a home base.

There was just one problem for David Toms and wife, Sonya.

The problem was exacerbated in July of 1997 when the couple welcomed their first child, son Carter.

“The grandparents, family and friends – everybody was in Louisiana,” said Toms, an Airline High product. “We always felt like we were away from home.”

After a two-year Texas experiment, the duo packed up, drove east on I-20 and returned to Shreveport.

It’s no coincidence the career of David Toms subsequently blossomed.

An individual SEC champion while at LSU, Toms scored his first victory on the PGA Tour — two weeks before Carter was born — at the 1997 Quad City Classic. The triumph sparked a two-decade run that included 13 Tour victories, highlighted by the 2001 PGA Championship.

His links success made him an easy pick in his first year of eligibilty for the Louisiana Sports Hall of Fame’s Class of 2017, set for induction Saturday, June 24 in Natchitoches.

Even in the prime of his career, when he was a consistent member of the Top 10 in the Official World Golf Rankings, Toms couldn’t stay away from home.

Success, heartbreak, family, philanthropy – every road has led Toms back to Louisiana.

As a kid from Bossier City, Toms followed the careers of Bert Jones, Ron Guidry and Terry Bradshaw. He had no “allegiance” to the Colts, the Yankees or the Steelers, but tracked those stars because they hailed from Louisiana.

When it became obvious golf was Toms’ forte, he didn’t have to look far to find a role model.

“(Shreveport’s) Hal Sutton – already a Player of the Year and all these accolades,” Toms said. “I thought, ‘Now that’s a guy who lives around here, you see him on TV and he’s one of the best in the sport.’ It gave me extra incentive to be one of those guys.”

On June 24, Toms will join every aforementioned athlete as a member of the Louisiana Sports Hall of Fame.

“It’s special for a guy like me who’s had his roots here forever, and had the support of sports fans, golf fans,” Toms said. “Being in the Louisiana Sports Hall of Fame with a lot of the greats is an honor.”

Toms, 50, is a full-time rookie on the Champions Tour this year. Even if he doesn’t win again on the PGA Tour, his Louisiana roots are firmly planted on the world’s best circuit.

In 2013, Toms completed his Golf Academy, also known as 265 (signifying the aggregate scores of his first and last Tour wins, plus his major championship). The multimillion-dollar facility has helped cultivate elite-level talent, including LSU’s Sam Burns, ranked as the nation’s No. 1 college golfer last season.

Not only does the inordinate amount of young golf talent in Northwest Louisiana have a role model in Toms on the course, but they are sure to glean his passion and pride for his roots.

Toms’ first love was baseball. However, as hot summer after hot summer went by, he realized the desire to shag flies, get in the cage or take infield had disappeared. Meanwhile, he didn’t mind grabbing dragging his golf clubs along for 36 or 54 holes in the heat.

“I still love (baseball),” Toms said. “Back then, I thought ‘(Golf) is different, something I enjoyed.’ I didn’t want to do anything else.”

His grandfather, the late Tom Toms, was the man who dropped him off at the course at dawn and picked him up at dusk.

“(Tom) was special for me because, at a time in my life, when I was getting to be a teenager, (Airline) high school through my college years, he’s who I lived with,” David said.

The former military man took his grandson to Barksdale Air Force Base in Bossier City on Mondays when “everything else was closed.” He read all the books and helped David pick the range.

“To know my game and what he thought was going to help me – he poured his heart and soul into me,” David said. “Financially, he did that, too.

“He gave me the opportunities that all the other people had to be successful. He was a person that gave everything to an individual to be the best they can be.”

With more than $41 million in career PGA Tour earnings, Toms enjoyed his fair share of success. However, it took eight years after departed LSU as an All-American and the SEC Player of the Year to jump into the Winner’s Circle on the PGA Tour.

One detour en route to stardom was the Asian Tour.

“It did a lot for me – seeing places in the world where people aren’t nearly as lucky as we are,” Toms said. “It puts it in perspective – things I saw in India and Thailand, places I thought, ‘I can’t believe people function like this.’

“Golf can really make you feel sorry for yourself a lot of times – whether you miss putts, hit a bad drive or get a bad break, the game can do a lot of things to you mentally. Those three months made me hungry to succeed on the PGA Tour, and helped me not get complacent when I did succeed so I did not have to do those things again.”

“There were plenty of ups and downs – from ‘I can do this,’ to, ‘Is this ever going to work out for me?’ Add to the mix getting married and starting a life outside where you knew.”

Toms won twice in 1999 to begin run of at least one PGA Tour victory in seven of eight years – he recorded three runner-up finishes in the season (2002) he didn’t win.

The 2001 campaign was hard to top. Toms won three times, including the Compaq Classic in New Orleans and the PGA Championship near Atlanta.

For Toms, the comeback victory at English Turn was the closest he’d get to feeling as if he was playing in Tiger Stadium, a place he loves dearly.

“It was the greatest,” he said. “I would think that’s what Tiger Woods got every week because he had so many fans. To know everybody is pulling for you, that was pretty cool. It doesn’t happen that often to anyone, no matter where we play. Even if it’s a home game for another player, they don’t get anything like that.”

Toms shot 63 and a 64 on the weekend. He was six strokes off the lead entering the final round, but posted a back-nine 30 to clip Phil Mickelson by two strokes and become the first Louisianan to win the event.

“It happened so fast on the weekend,” Toms said.

Three months later, Toms rode one of the most memorable shots in major championship history to the PGA Championship.

A third-round hole-in-one on the 243-yard 15th helped Toms grab a two-stroke lead over Mickelson, his victim at the Compaq Classic, entering the final round.

With a one-stroke lead on the final hole, Toms famously played conservative facing a treacherous approach on 18 at Atlanta Athletic Club and clinched the victory – and, at the time, the lowest score in a major, 265 — with a 12-foot-par putt.

Toms was on top of the golf world in the early 2000s. He represented the United States on three Ryder Cup teams and four President’s Cup teams. However, there was always a battle raging within.

“I always felt like it was selfish of me, even if I was playing great, to continue to stay away and not try to have some sort of normal life with your family,” Toms said. “When I was in the prime of my career, Carter was playing baseball. It used to kill me to miss games.

“I tried to figure out how I was going to get some kind of live feed – before FaceTime and all these crazy things. I was like, ‘I have to see this at-bat.’ A lot of times, my spring schedule was based around his baseball schedule.

“Rain outs for the baseball game were the worst. It would rain three nights in Shreveport and I didn’t get to see a game, but they would schedule five the next week when I was playing.”

Outsiders could question why Toms took time away from the Tour when he was playing his best, but he says: “It did a lot more for me to be as normal as I could.”

Carter is now a member of LSU’s golf team. David and Sonya also have a 11-year-old daughter, Anna.

Although Toms’ days on the PGA Tour are numbered, his legacy in his beloved home state is not in jeopardy of fading anytime soon.

His foundation, established in 2003, donated more than $3.7 million to local organizations, specifically those with programs to help underprivileged, abused and abandoned children, in its first 10 years.

“It was our avenue to give back to people in need. Kids that needed to be at a golf course, a roof over somebody’s head, clothes – the reason we were able to do it, is we had the support of people who supported my golf career. Fans of mine, fans of golf, fans of Louisiana.

“They’ve always supported me. It’s not always rosy. If you have high expectations, you’re always dealing with failure. To have people that support you through that, and help you get through it, you have to have that.”

Four years ago, Toms’ world-class instruction and training facility opened in Shreveport and is the site for many after-school golf programs and summer golf camps for children of all socioeconomic backgrounds.

At one point, three of the nation’s top seven high school players in the country were all members at 265. In 2016-17, five members of the LSU’s men’s golf team hailed from Shreveport.

In 2011, Toms received the PGA Tour’s Payne Stewart Award – the top off-the-course honor. He received the Independence Bowl’s Sportsperson of the Year in 1997 and entered the Gulf States Section PGA Hall of Fame in 2012.

“It begins with the image of the sport, and the image of the sport is driven by the players, how they carry themselves, how they conduct themselves, what people at home feel like they represent, and when 93, 94 percent of Americans say I want my kid — I’m comfortable with my kid using a PGA Tour player as a role model, significantly higher than any other sport, it’s because of players like David Toms,” former PGA Tour commissioner Tim Finchem said.

“David Toms, in addition to everything else, has been a leader on the PGA Tour. He’s been on our policy board, and all of us in the sport owe him a debt of gratitude for the contribution he’s made in that regard.”

“I’ve always tried to provide a good example for them – on the course and off the course,” Toms said. “If that’s helped them, great. It’s always in the back of my mind – especially around (265) or wherever I am.”