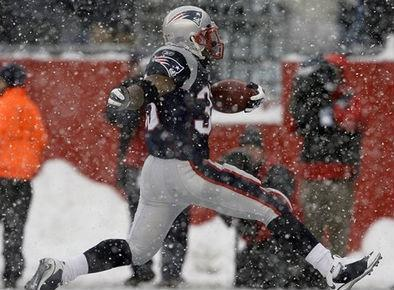 Faulk, who is also a member of the LSU Athletic Hall of Fame and the Louisiana Sports Hall of Fame, was voted by the fans to become the 25th entrant into the Patriots Hall of Fame.

“Kevin Faulk helped deliver three Super Bowl championships and redefined the way an entire generation of Patriots fans celebrated football in New England,” said Patriots Chairman and CEO Robert Kraft. “Despite entering the NFL as the second-leading rusher in SEC history, he arrived in New England without ego or pretense. He was a selfless and tireless contributor to the team, accepting every challenge and excelling in many roles throughout his 13-year career. His work ethic, enthusiasm for the game and clutch performances, especially on third down, earned him the respect of his coaches, teammates and fans alike.

“For all his contributions and memorable moments on the field, some of my fondest memories were of Kevin’s contributions off the field. He earned our Ron Burton Community Service award in 2009 and often involved his family in his volunteer work, teaching his children the values of giving back.”

Faulk, who capped his LSU career as the school’s all-time leader rusher with 4,557 yards, ranks fifth in Patriots history in rushing yards (3,607) and receptions (431), and he’s 12th in franchise history in receiving yards (3,701).

Faulk played 161 games with the Patriots and he’s New England’s all-time leader in receptions for a running back. He’s also one of just 300 running backs in NFL history to reach the 400-reception mark. In 13 years with the Patriots, he helped the franchise to a winning record 11 times, five AFC Championships and three Super Bowl titles.

Faulk’s induction ceremony will take place on Monday, Aug. 1 on the NRG Plaza outside The Hall at Patriot Place. The outdoor hall of fame ceremony is free and open to the public. Faulk will also be honored at halftime of the Patriots’ 2016 home opener against the Miami Dolphins on Sunday, Sept. 18.

About the Patriots Hall of Fame
The Patriots Hall of Fame was officially formed in 1991 after John Hannah became the first Patriots player to be inducted into the Pro Football Hall of Fame. With the Hall of Fame, the Patriots created a new way of honoring their greatest players. The Hall at Patriot Place presented by Raytheon officially opened in 2008, giving Patriots players, past and present, a place where there legacies can be preserved for generations to come. Enshrinement into The Hall is an honor befitting of the franchise’s greatest players and contributors, with 30-foot video pylons displaying each inductee. Beginning in 2007, fans became part of the hall of fame tradition and active participants in the selection process. Read