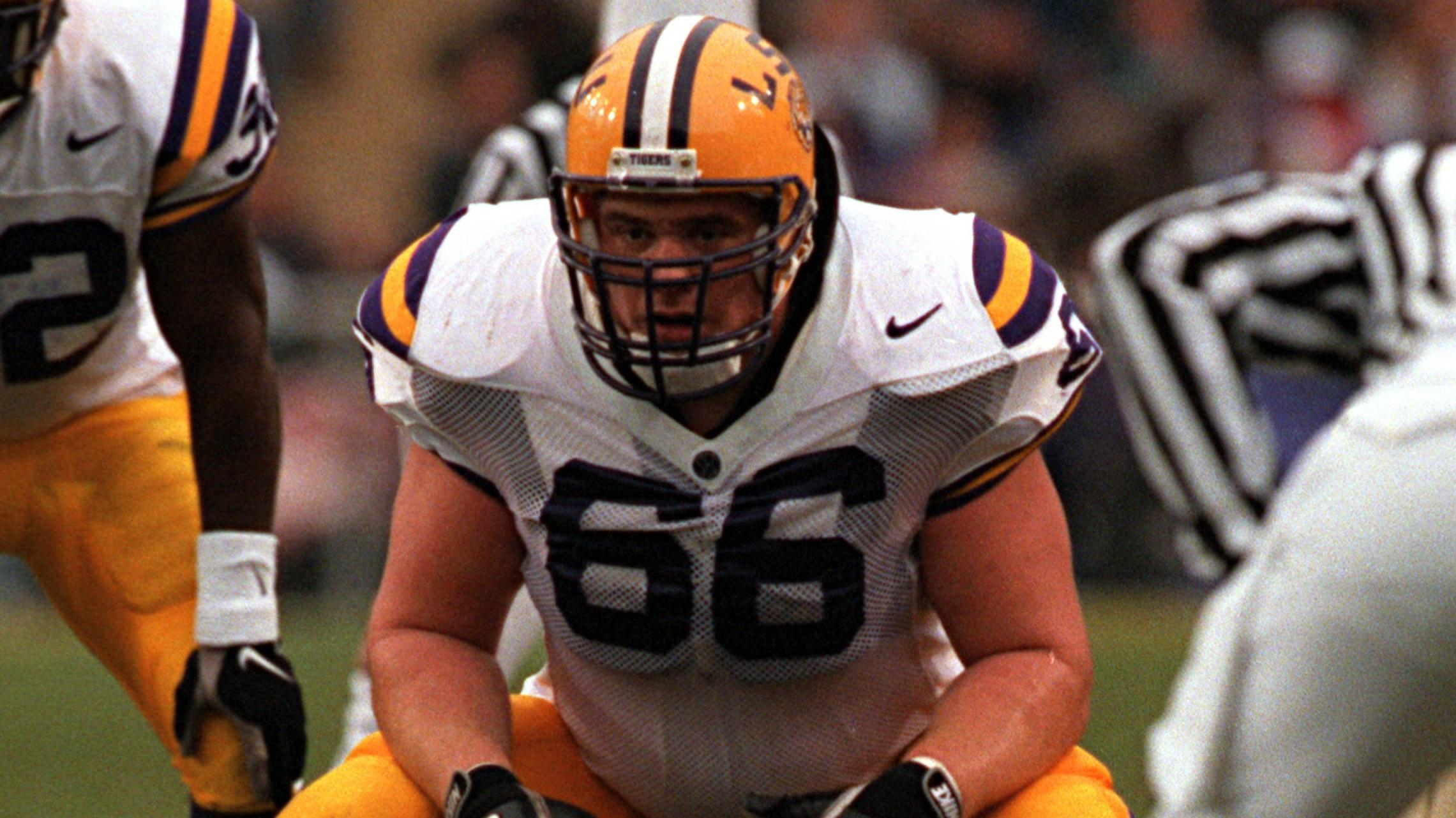 Editor’s Note: This is the third of three profiles of inductees for the Louisiana Sports Hall of Fame that have LSU ties. Alan Faneca had a very successful career on the offensive line at LSU and it marks the second straight year a Tiger lineman is voted into the Hall.  This year’s induction is set for Saturday night at the Natchitoches Events Center.

An exceptional college and pro football career put offensive guard Alan Faneca on the fast track to the Louisiana Sports Hall of Fame.

As if to remove any doubts about his worthiness, the former LSU Tiger and Pittsburgh Steeler slipped in one more extraordinary accomplishment between election and induction.

Nine-times an NFL Pro Bowler, six times an All Pro and a consensus Tiger All-American in 1997, Faneca switched sports after ending his football playing days. On a whim last fall he began training for a marathon, having dropped more than 100 pounds from his playing weight. On the same day Seattle devoured Denver for the Super Bowl title, Faneca ate up the 26.2 mile course at the New Orleans Rock and Roll Marathon in 3 hours, 56 minutes and 34 seconds, an amazing clocking for a man his size in his first try.

Faneca’s already prodigious Hall of Fame biography may require some future editing if his running career stays on track. But even before his latest exploits, he was an easy pick for the 30-member Louisiana Sports Writers Association panel that elected him last summer, the second consecutive year a former Tiger offensive lineman was chosen.

The induction of Faneca is Saturday night, June 21, highlighting the June 19-21 Louisiana Sports Hall of Fame Induction Celebration. A complete schedule and participation opportunities are at LaSportsHall.com or can be obtained by calling the Hall of Fame Foundation office at 318-238-4255.

“It’s a great honor and it took me completely by surprise,” Faneca said in a recent interview in his Metairie home.

“It’s a tribute to all the teammates I’ve played with. I remember (former LSU center) Kevin (Mawae) being elected last year, but this came out of left field.”

So did the news of his marathon run, for most of his fans. Faneca, a burly 320-pounder during his college and pro playing days, was nearly unrecognizable after changing from his 4,000 calorie per day diet to 1,800 upon his retirement following the 2010 season. He also stopped his one-hour a day cardio workouts and weight lifting sessions.

On a beautiful day last fall he decided to join his wife, Julie, for a run around New Orleans’ City Park, which got him back in exercise mode. On a future run, he took a notion to go straight for the long way around the park rather than turning right for the shorter route and it fired his desire.

“That’s how it started,” he said. “I ran about seven miles and remember thinking ‘That was fun’ and I got into it. I started thinking about running a half marathon. I was winging it, didn’t know anything about running.”

On a visit to Pittsburgh, Faneca confided in some of the Steelers’ trainers that he was thinking of doing a half marathon and when they offered him encouragement, he took it as a challenge.

“They told me, ‘Oh, you got this; that’s going to be easy for you’,” Faneca recalled. “I thought to myself that I wasn’t looking for ‘easy.’ So I came home and started training for the full deal. I got some coaching help and I was able to finish.

“I never imagined I would do this. Even when I started training I was thinking I would ‘try’ to do a marathon. It was fun, exciting, painful. The last couple miles were interesting on a multitude levels. But it’s exciting, a new chapter in my life.”

It is still just a budding chapter for the former LSU star who grew up on the West Bank but left the state for his four years of high school at Lamar Consolidated in Houston. He had attended John Curtis Christian School from fifth grade until eighth grade and his room was adorned in purple and gold gear.

Even with his Louisiana roots he committed to Alabama a day before national signing day in 1994 but changed his mind the next morning. He redshirted his freshman year but then started every game at right guard the next three years, 36 straight, as LSU changed coaches from Curley Hallman to Gerry DiNardo.

“He was one of the guys who was a great student of the game and his technique,” DiNardo said. “He broke the game down more coach-like than player-like. It was really important to him. Alan bought into the ‘a 6-inch step is better than an 8-inch step’ and a 3-inch step isn’t good enough’.”

“He was a quiet guy, not a vocal leader. Everyone looked at him and really respected how hard he worked, how attentive to detail he was.”

Said LSU line mate Ben Bordelon, with whom Faneca played two seasons: “You could tell from the first day of practice he was going to be something special. In walk-through you could tell from his strength, footwork. . . he was athletic and a hard worker. He always led by example. He would teach the upperclassmen how to do it.”

With Faneca up front and Kevin Faulk in the backfield, LSU became known for its physical style running game. He was a second team All-America pick as a sophomore and a consensus All-American as a junior. He was one of three finalists for the Outland Trophy in 1997.

After the 1997 season he and Faulk, who became LSU’s all-time rushing leader, had to decide whether or not move on to the NFL. Most fans and even the LSU coaching staff expected Faneca to stay and Faulk to leave, but the reverse happened.

Faneca made his tearful farewell at a press conference after learning from the NFL Advisory Committee he would undoubtedly become a first-round pick.

“It tore me up to leave friends and take that big of step and leave the comfort zone of LSU,” Faneca recalled

“I equate it to the decision to retire. It was a lot of little things, my recruiting class and core buddies had already moved on. Felt like the right thing to do.”

The Steelers made Faneca the 26th player picked in the draft and he paid immediate dividends when injuries hit the Steelers’ offensive line in 1998. He received the franchise’s Joe Greene Award for the top rookie and by 2001 was named to his first of nine consecutive Pro Bowls. He was an All-Pro in 2001-02 and 2004-07.

Faneca was as durable as he was talented. He started 201 of 206 games he appeared in and started all 16 games in his final nine seasons in the league. He helped the Steelers to win Super Bowl XL, providing the key block to spring teammate Willie Parker for a 75-yard TD run, the longest carry in Super Bowl history, on the second play of the second half to give Pittsburgh a 14-3 lead against Seattle.

He was named to the Pro Football Hall of Fame’s All-2000s team and was chosen to the Steelers’ 75th anniversary all-time team in 2007.

“I was immediately drawn to him because of how great a player he was,” said Steeler teammate Brett Keisel. “He was always working, even after consecutive Pro Bowls. Not only did he work hard in practice but in games you always saw Alan hustling and making plays down field, which is why we had such a great rushing attack when he was here.

“The Steelers fans loved him. They were drawn by the way he plays the game, a no-nonsense player. When media or anyone would address him, he wouldn’t sugarcoat anything. He would usually speak his mind on what he thought, which would sometimes cause controversy.”

Faneca loved the Steelers fans back, saying it was the closest thing to playing college ball than for any other team in the NFL. His enduring memory was a picture he dug up that showed him holding the Vince Lombardi Trophy aloft while the team celebrated at Ford Field in Detroit.

Pittsburgh had to win its final four games in 2005 to make the playoffs and then won four consecutive playoff games to take its fifth Super Bowl title.

“Our backs were to the wall,” he said. “If we lost one it was over. We snuck in. I was an older guy, we had been close a couple times. Core group of guys fighting to find a way in, an accumulation of all those years of work. It was special.

“You talk about a team coming together for two weeks. I don’t know if I ate a meal with my wife that week, maybe one.”

Faneca left the Steelers as a free agent after the 2007 season and played two years with the New York Jets. He was cut and then picked up by Arizona, coached by former Steeler offensive coordinator Ken Whisenhunt and Faneca was reunited with his old offensive line coach Russ Grimm. He played one season there, but retired despite the fact that the Cardinals wanted him back.

“It took me a month to decide to retire,” he said. “You’ve been doing something since the 4th grade to think about not lining up, going to training camp and doing football the next year was a hard thing to grasp. You still love the game.

“I had a lot of friends on the staff, we loved it out there. I was close to playing again. It was time. I didn’t want to be one of those guys stretching it out.”

Faneca is far from being a full-time distance runner now. His off-field contributions are many, including extensive work with the Epilepsy Foundation of America. Faneca himself was diagnosed with the disease at age 15, and has controlled it since with medication.

His 9-year-old daughter, Anabelle, has also been diagnosed with a form of the disease called Sturge-Weber Syndrome. Faneca is moving his family, which includes 3-year-old son Burton, to the Washington D.C area to be nearer to Anabelle’s specialist.

He has at least one more appearance in Louisiana on June 21.

“It’s going to be exciting to have friends and family there, and to be in that group of (inductees),” Faneca said. “It’s truly an honor.”