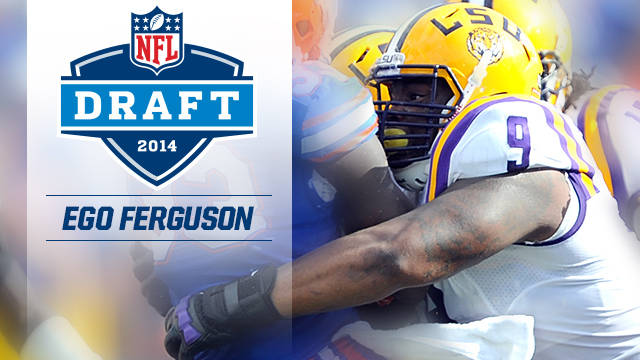 BATON ROUGE — LSU defensive tackle Ego Ferguson, running back Jeremy Hill and wide receiver Jarvis Landry were each selected in Friday evening’s second round of the NFL Draft, while offensive guard Trai Turner was taken in the third round.

The four picks on day 2 of the draft came after wide receiver Odell Beckham Jr. was picked in the first round. Beckham Jr. was the 12th overall pick by the New York Giants on Thursday.

Ferguson was the 300th LSU player selected in the history of the NFL Draft dating back to 1936, as he was selected by the Chicago Bears. After redshirting his freshman season in 2010, he played 38 games with 12 starts from 2011-13. He finished his career with 85 tackles including five tackles for loss and a sack. He was the 51st overall pick, 19th in the second round.

Hill, who was selected by the Cincinnati Bengals four picks after Ferguson in the second round, averaged  6.3 yards per carry for his career and earned first-team All-SEC honors after leading LSU with 1,401 yards and 16 touchdowns. He tied former Tigers Steve Van Buren, Charles Alexander, Kevin Faulk with a school-record seven 100-yard games during his sophomore season.

Though no running backs were taken in the draft’s first 53 picks, Hill was among three backs selected in a span of four picks.

Landry was the second LSU receiver taken in the draft, as the Miami Dolphins picked him 63rd overall with the 31st pick of the second round. He capped a record 12 wide receivers taken in the first two rounds of the draft.

One of the most productive wide receivers in school history, Landry had 137 catches for 1,809 yards and 15 touchdowns during three seasons in Baton Rouge. Landry had his best season as a junior, earning second-team All-SEC honors with 77 passes for 1,193 yards and 10 touchdowns.

The second and third rounds of the draft continue on Friday night, with rounds 4-7 scheduled for Saturday at 11 a.m. CT.

The 2014 NFL Draft is carried live by ESPN and the NFL Network.

#LSU leads the SEC and is tied for the national lead with 5 players drafted through the first 3 rounds. http://t.co/uLTC0TsHRc

With the 63rd overall pick in the 2014 NFL Draft, the Miami Dolphins select WR Jarvis Landry from LSU. #FinsUp pic.twitter.com/fBFjB02V2Y

With the 92nd overall pick in the 2014 NFL Draft the #Panthers select OG Trai Turner out of LSU. #PanthersDraft